For the first year of the “Summer Festival Opera 2019-20 Japan↔Tokyo↔World”, Puccini’s “Turandot” was performed in July 2019 at the Tokyo Bunka Kaikan.
Under the direction of General Producer and Artistic Director of Opera at the New National Theatre, Tokyo, ONO Kazushi, the production was headed by Àlex OLLÉ, one of the six artistic directors of the cutting-edge Spanish theater company La Fura dels Baus. The orchestra was the Barcelona Symphony Orchestra-the National Orchestra of Catalonia (where ONO serves as Music Director), and the chorus included the participation of three groups: the New National Theatre Chorus, the Fujiwara Opera Chorus Group, and the BIWAKO HALL Vocal Ensemble. 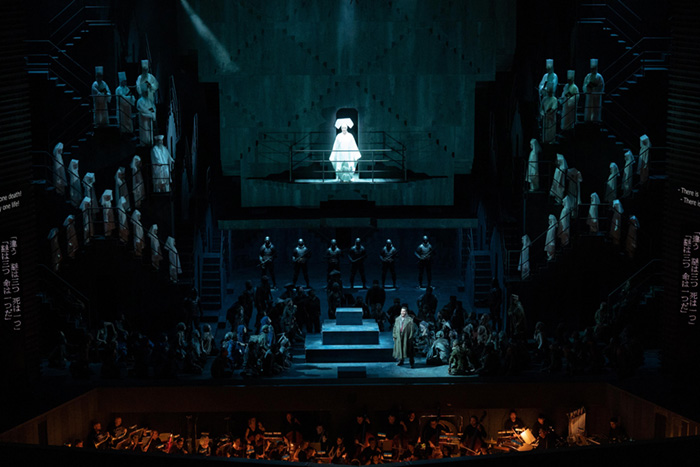 The spectacular set is centered on the motif of an ancient well, with the chorus arrayed up to its highest points. Ⓒ HOTTA Rikimaru

The distinctive set design featured a monotone mood of decay, reminiscent of a whimsical imaginary city. Inspired by the stepwells of India, the stage design was enormous, with maze-like staircases tall enough to hide the entire backdrop of the stage. The moveable set also made it possible for the chorus to sing as they moved in impressive choreographed motions, as if drawing beautiful patterns. The chorus, composed up of groups from across Japan, was soul-stirring, and the set design also played an acoustic role in acting as a sounding board.

The cast on the opening day (July 12) featured a master of Wagner, Iréne THEORIN, as Turandot, Romanian Teodor ILINCĂI as Tartar Prince Calaf, who seeks Princess Turandot’s hand in marriage, NAKAMURA Eri as Liù, an innocent female slave who longs for Calaf, and Italian Riccardo ZANELLATO, as the emperor Timur, Calaf’s fathe

Left: Turandot sings about the unfortunate fate of her ancestor in In questa reggia (“In this palace”). (Iréne THEORIN) Ⓒ HOTTA Rikimaru
Right: The role of Prince Calaf, which demands strength throughout the highest notes, is one of the toughest for a tenor. (Teodor ILINCĂI) Ⓒ HOTTA Rikimaru

The scene in which the princess sings In questa reggia from a high place in Act 2, describing the tragedy of her ancestor, Princess Lou Ling, is one of the most tense scenes of a title role, but THEORIN demonstrated her mastery, singing in a sharp, clear and beautiful soprano voice. Immediately afterward follows the scene of her posing three riddles to the suitor Calaf; Turandot’s cunning treble remained completely unshaken, and Calaf’s determined song carried a heroic weight in its expressiveness. Calaf is a role that demands strength in the voice, as well as Radames in Verdi’s “Aida”. ILINCĂI was not merely a singer who competes with volume; he seemed to have stepped into the internal perspective the composer desired. 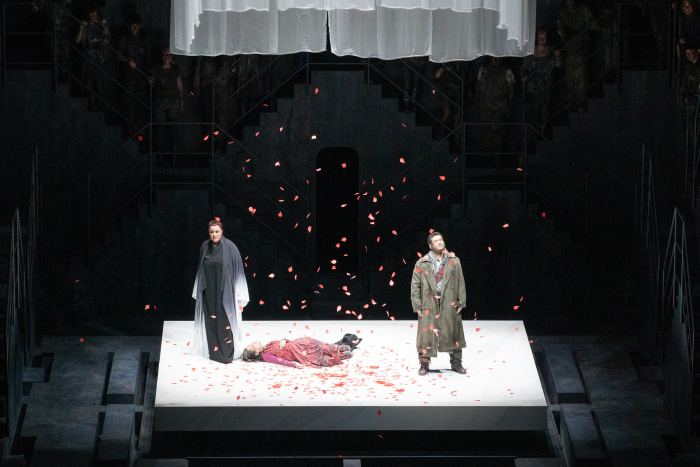 A symbol of self-sacrifice: the death scene of Liù, who gave her life for Calaf. Ⓒ HOTTA Rikimaru

It was NAKAMURA Eri as the female slave Liù who gained the most sympathy from the audience. NAKAMURA, who has sung in this role in multiple productions as an international singer and has stood onstage for eccentric productions in the past, expressed the pride and overflowing love given to this role in every scene. In Act 3’s Tu che di gel sei cinta, the scene of Liù’s suicide to protect Calaf, her compelling singing and acting caused the audience to fall completely silent. 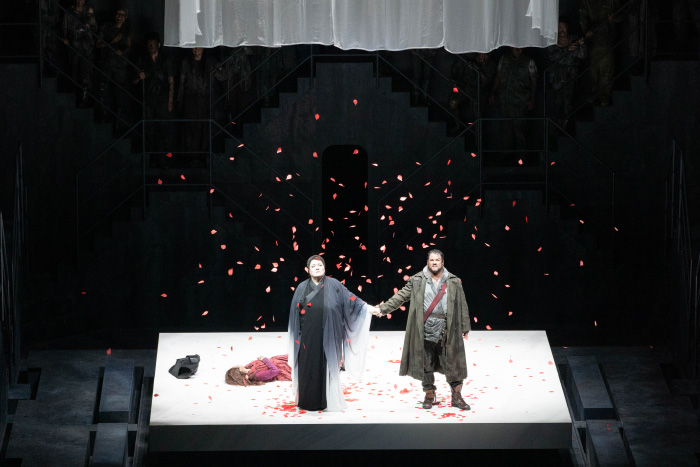 The two clasp hands in front of Liù, who lost her life, following the astonishing final scene. Ⓒ HOTTA Rikimaru

The widely discussed final scene reflects producer OLLÉ’s policy that “Puccini did not want a happy ending to this work.” In the performance, beside the body of Liù, Turandot and Calaf take each other’s hands, and just as it seems to be the end, Turandot slits her own throat with a knife, committing suicide. It is well-known that the dying Puccini had written up to Liù’s death, and the parts appended by his disciple Alfano after the composer died have been interpreted as “contradictory music.” The audience was greatly surprised by the tragic ending.

July 13’s cast featured American soprano Jennifer WILSON as Turandot, Canadian tenor David POMEROY as Calaf, SUNAKAWA Ryoko, who has distinguished herself as the heroine of “Tosca” and “La Bohéme,” as Liù, and TSUMAYA Hidekazu, with his broad repertoire and excellent sense of stability, as Calaf’s father Timur.

Left: Soprano WILSON gives us a Turandot who doesn’t lose softness even within her strength. (Jennifer WILSON) Ⓒ HOTTA Rikimaru
Right: POMEROY allows us to hear what a real dramatic tenor is made of. (David POMEROY) Ⓒ HOTTA Rikimaru

WILSON seemed slightly nervous on the opening day in Tokyo (July 13), but she sang through the difficult riddle scene with beautiful soprano tones, and her expression of sympathy toward Liù shown in the final scene was impressive. POMEROY, in the role of Calaf, was a magnificent entertainer, unleashing a stream of high notes with his powerful voice.
SUNAKAWA Ryoko, in the role of Liù, made it known to the audience how much Puccini truly loved the role, with such a degree of perfection that it was difficult to choose between her and NAKAMURA Eri.

ONO Kazushi, the director who conducted the overall production, gave a Spanish flair to “Turandot,” a masterpiece of Italian opera, drawing out from the Barcelona Symphony Orchestra a Catalan sense of color that’s a bit different from emotional Italian sensitivities. The richness in color was resounding from the orchestra in the dark throughout the performance, which, as a result, gave a unique and enchanting touch.

The passionate performance of Ping, Pang, and Pong by Japan’s leading tenors and baritones. Referred to as “Chinese eunuchs” in the original, Ping, Pang, and Pong undergo series of costume changes in this production. (Left:July 12, 14 cast  Right: July 13 cast) Ⓒ HOTTA Rikimaru

Throughout the two performances, what looked to be still more luxurious than even the enormous set, was the presence of the six singers who played the eunuchs Ping, Pang, and Pong. These were MASU Takashi (Ping, July 12, 14), MORIGUCHI Kenji (Ping, July 13), YOGI Takumi (Pang, July 12, 14), AKITANI Naoyuki (Pang, July 13), MURAKAMI Toshiaki (Pong, July 12, 14), and ITOGA Shuhei (Pong, July 13). Watching as these singers, each one with the ability to sing Japan’s leading roles at the highest level, darting about in mud-caked clothing, singing with beautiful, sincere voices, one couldn’t help but feel proud of Japanese entertainers. It may be easily overlooked, but the strength of the dedication of such singers in supporting roles may be what sustains the life of the opera.

We should also give high praise to the Japanese choral team, moving up and down the towering heights of the stage, producing a dramatic chorus, as well as Susana GÓMEZ, the associate director who provided crucial support from the shadows for OLLÉ’s large-scale production, choreographing the movements of the chorus. 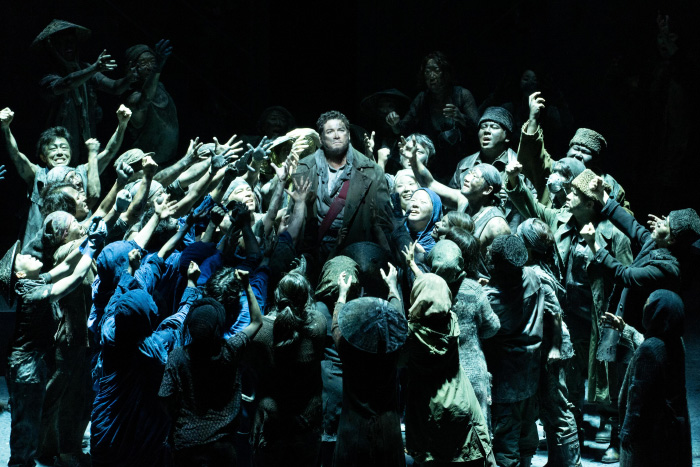 The chorus also made a tremendous showing, with an atmosphere both exotic and transcending nationality. They made the opera a success with a combination of strong perseverance and practice. Ⓒ HOTTA Rikimaru

This grand project, which upholds the prestige of Japanese opera, continues with Wagner’s “Die Meistersinger von Nürnberg” from June to July 2020. The director and general producer will once again be ONO Kazushi. The orchestra will be the Tokyo Metropolitan Symphony Orchestra, also headed by ONO as Music Director. World-class singers have already been cast.