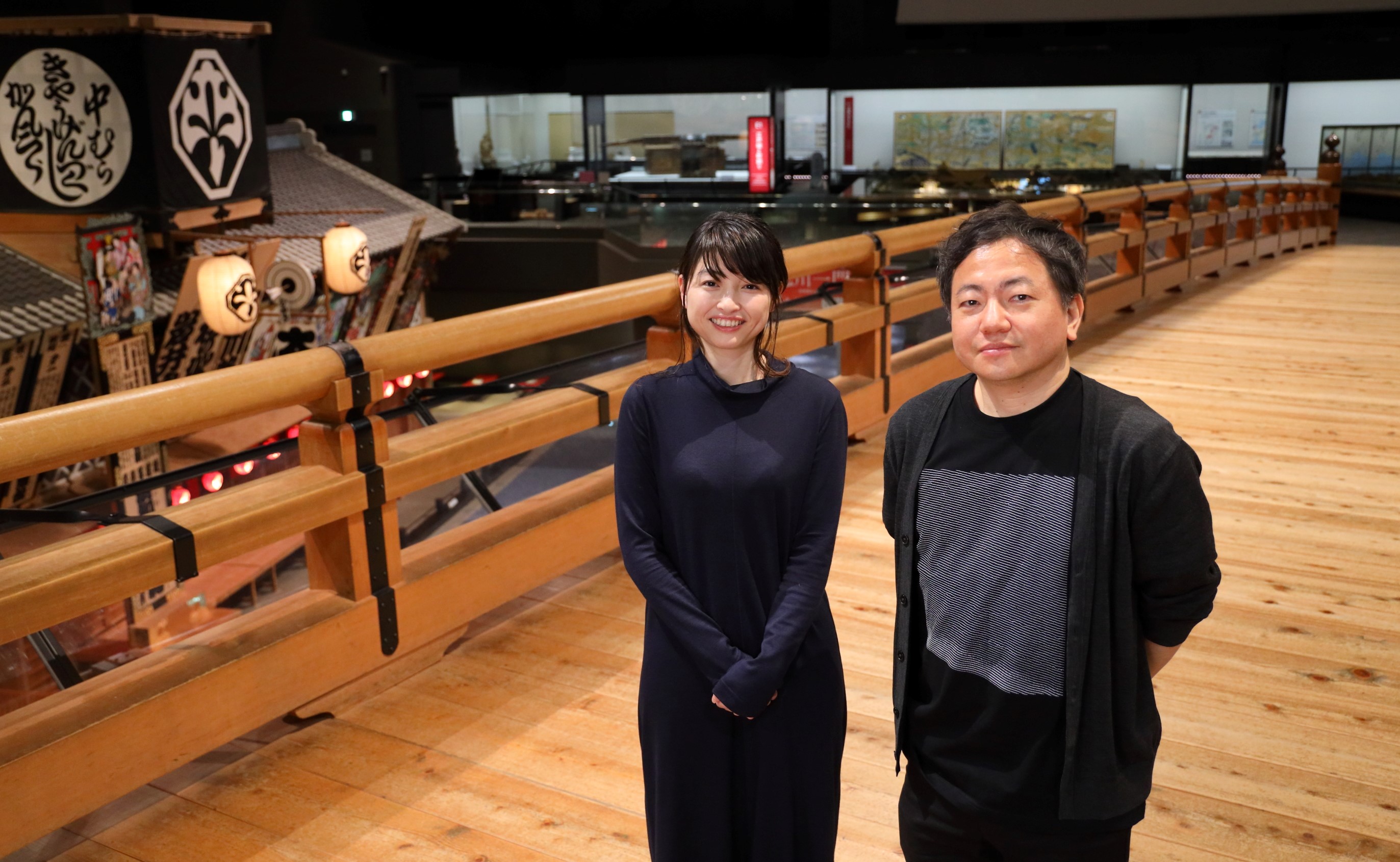 Experience Life in Edo As If Playing a Game: Behind the Scenes of the Making of the Edo-Tokyo Museum’s Hyper Edohaku App!

About three decades have passed since the Tokyo Metropolitan Edo-Tokyo Museum opened its doors in 1993. The museum has been closed for major renovations from April 1, 2022, and is scheduled to remain closed through fiscal 2025. To enable the public to enjoy the history and culture of Edo and Tokyo online during this extended closure period, on Friday, April 22,2022, the Edo-Tokyo Museum released Hyper Edohaku, an interactive app that it developed jointly with a game studio. We spoke with Edo-Tokyo Museum curator Shoko Haruki, who planned and supervised the app, and Katsuya Taniguchi from Rhino Studios Inc., who worked on the app’s development and production, about the project.

Thoroughly unique content that only the Edo-Tokyo Museum could provide

Hyper Edohaku is the Edo-Tokyo Museum’s official smartphone app. It provides a game-like experience through which users can learn history and fun facts about Edo and Tokyo. The project began as a way to actively promote the Edo-Tokyo Museum during its extended closure period. According to museum curator Haruki, the biggest challenge in producing the app was figuring out how to create content unique to the Edo-Tokyo Museum.

Haruki When people hear ‘digital content,’ they usually imagine things like 360-degree virtual reality created from 3D scans of the exhibition space or digital archives that allow anyone to view the facility’s materials online. We already provide services like that, and so do a variety of other museums. So if we were going to create a virtual space, we wanted it to be content that would allow visitors to actually experience life in the Edo period using the elaborate models on display at the Edo-Tokyo Museum. With this in mind, we approached several different production companies and asked for competitive proposals. Rhino Studios was the company that blew us away with the most stunning images. 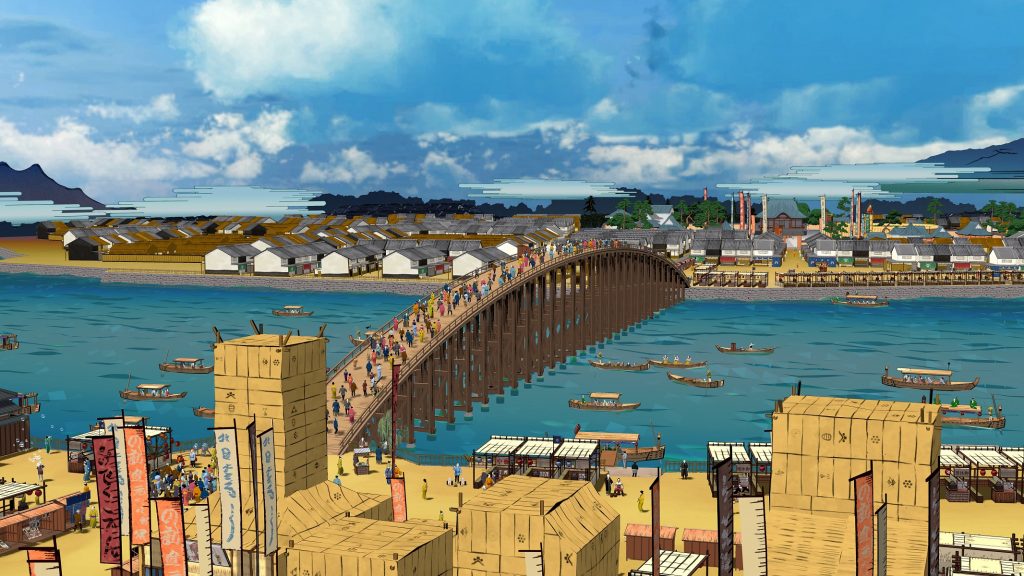 Taniguchi Although the only thing we submitted in our proposal was the Ryogoku-bashi Bridge, the company I work for, Rhino Studios, was founded by members who come from game development backgrounds. So our suggestion was, “Why don’t we create an app that lets users enjoy this kind of Edo space as if it were a game?”

What came together was the idea to have users search for and collect items from the Edo-Tokyo Museum collection while exploring the Ryogoku-bashi Bridge area. The innovative aspect of the app, explains Taniguchi, is that “it uses a full-fledged game engine to playfully engage users and keep them interested until they reach an item from the museum’s collection.”

How does Hyper Edohaku immerse users in the lives of Edo people and the energy of the times?

Upon launching the app, the first thing that users see is an eagle soaring with outstretched wings, reminiscent of the woodblock print “Fukagawa Susaki Jumantsubo” from the famous series One Hundred Famous Views of Edo created by ukiyo-e artist Utagawa Hiroshige in his later years. With sacred Mt. Fuji and Mt. Tsukuba visible in the distance, the eagle flies over the western bank of the Ryogoku-bashi Bridge and Hirokoji Street, lined with playhouses, spectacle show venues, and teahouses. Edo during this period was the world’s largest metropolis, with a population of around one million people. 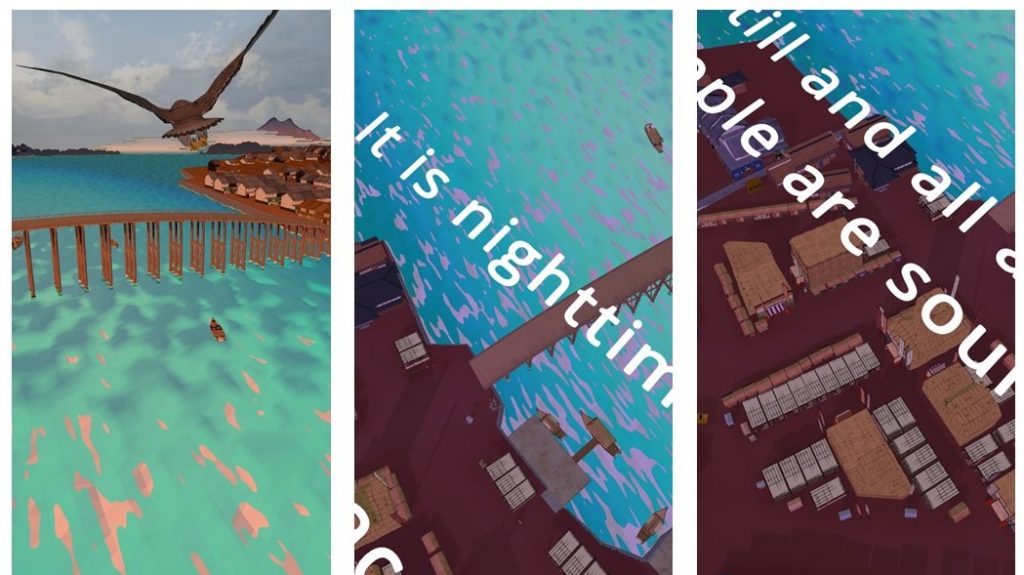 The opening sequence takes users up the Sumida River from an eagle’s eye view to the area around Edo’s Ryogoku-bashi Bridge, where the game takes place

The user, whose viewpoint gradually merges with that of the eagle, looks down on a room in a nagaya (row house), where the avatar, Edohakun, lives with his parents. Icons appear on the screen, prompting the user to collect the items in the room. Following the hints provided by these icons, the user can tap on the futon, hettsui (kitchen stove), and other objects, which reveals items from the Edo-Tokyo Museum collection onscreen with more information and adds the items to the user’s collection. 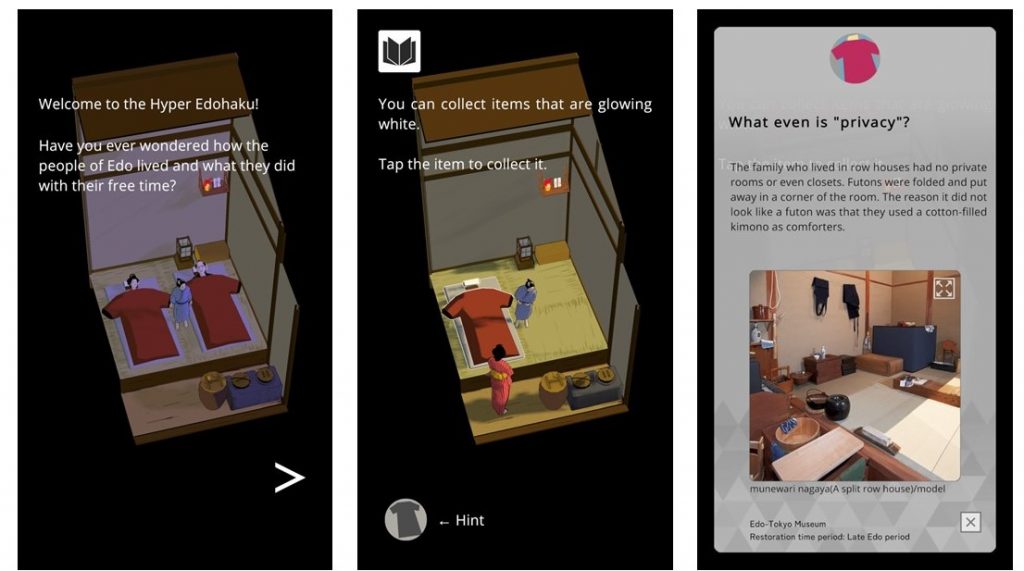 The user starts their journey in the nagaya that Edohakun calls home. Here, Edohakun collects essential items for life in a nagaya before heading out to town.

After collecting essential daily life items in the Nagaya area, Edohakun finally ventures out into the bustling city streets. In the lively west bank area, Edohakun sees an elephant and camel at the spectacle shows and gathers street foods to serve as still life subjects for an ukiyo-e woodblock print by the request of the owner of an illustrated book store, while collecting items in each part of the city. Along the way, he encounters famous historical figures such as Katsushika Hokusai and Hiraga Gennai, and eventually crosses the Sumida River via the Ryogoku-bashi Bridge to the eastern bank, where the Edo-Tokyo Museum is located today. At Ekoin Temple, he watches a thrilling sumo wrestling tournament. 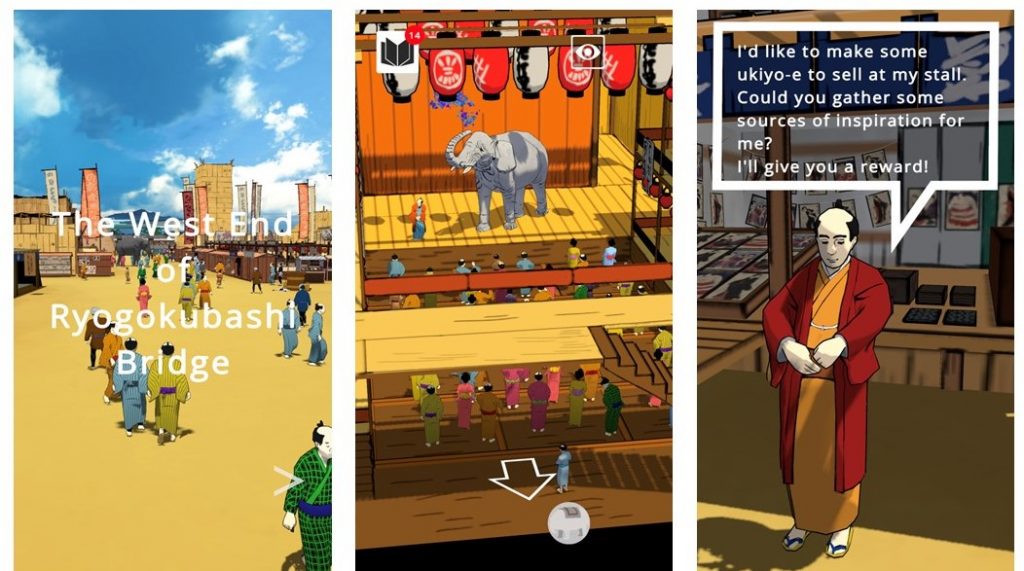 The game starts on the 28th day of the fifth month of the lunar calendar, the day from which businesses are permitted to operate along the Sumida River for three months. Among the street stalls and spectacle shows in the bustling Ryogoku area, users encounter various people and receive hints as they collect items.

Detailed realism, from the scale of the entertainment district to the gestures of the characters 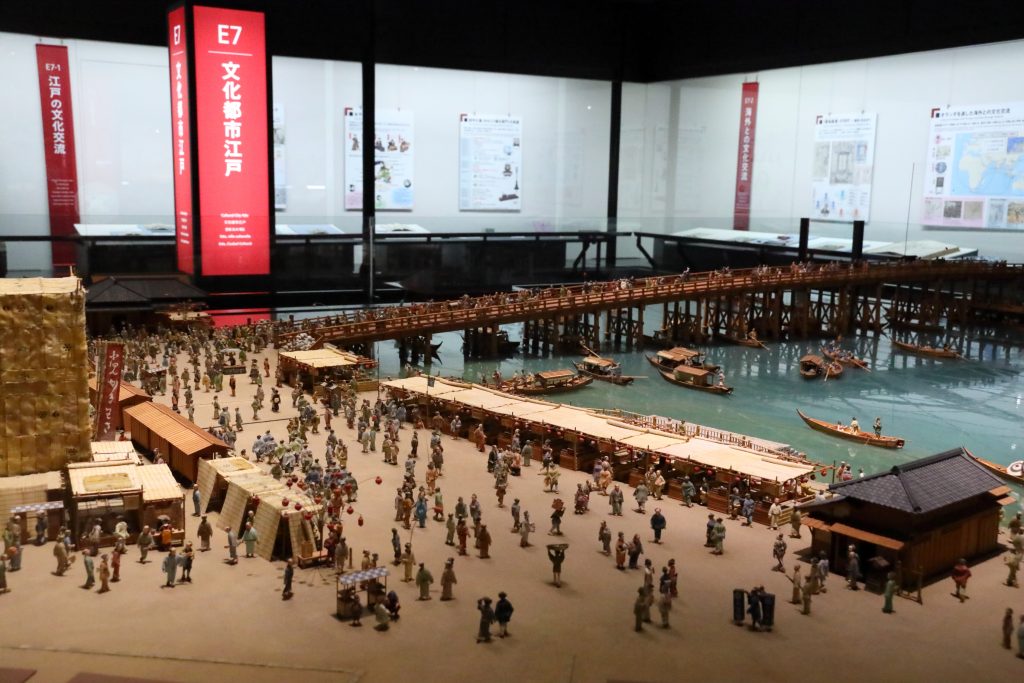 The app, which immerses users in the city of Edo and can be enjoyed by everyone from elementary school students to the elderly, is particularly impressive for its stylistic touches evocative of ukiyo-e prints and for the variety of different viewpoints it offers. One thing that may surprise users is the vastness of the western bank’s Hirokoji area, which was established as a “fire prevention area” to stop the spread of fires. This festive space lined with playhouses and spectacle show venues was not pulled from the team’s imagination. Rather, it was accurately reproduced to scale based on the model of the western bank of the Ryogoku-bashi Bridge on display at the Edo-Tokyo Museum.

Haruki In fact, this entire model was made using blueprints and elevation maps derived from ukiyo-e prints, books, and other materials from the Edo period. The museum recreated the landscape of the western bank of the Ryogoku-bashi Bridge based on these materials and drawings. Because of this, users can literally immerse themselves in the area around Ryogoku-bashi Bridge, which was the busiest entertainment district in Japan during the late Edo period, and experience what the city was like in those days. 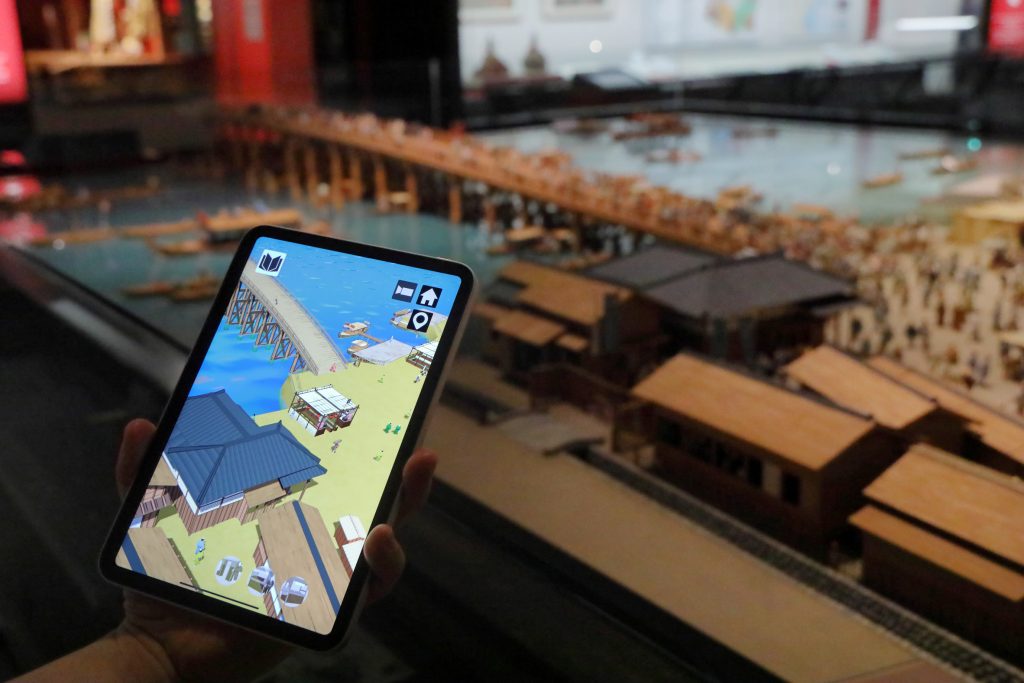 The app faithfully recreates a broad area spanning the western bank of the Ryogoku-bashi Bridge to Ekoin Temple across the river, where sumo wrestling tournaments were held. This realistically rendered space was built based on historical materials, enabling users to immerse themselves in the city of Edo from a virtual reality-like perspective.

Taniguchi If this were a fantasy world in a game, we could have built it entirely from our imaginations. Instead, we recreated the streets in the app based on historical materials and information from experts. It was a fresh experience to connect the dots and see how the back row houses where the common people lived connected to the main street on the western bank. Movies and period dramas cut up the landscape scene by scene so that you never get a full picture of the area. In the app, of course, the landscape is continuous, and it is interesting to get to know how the city was laid out.

The team also strove to achieve a sense of realism in the characters’ mannerisms.

Taniguchi In order to replicate the gestures of people in the Edo period, who wore kimonos in their daily lives, we asked the classical Japanese dance performer Ryotaro Fujima to contribute motion capture movements. Fujima performed all the different characters in the app while wearing sensors. The resulting gestures, gait, and mannerisms of the people—some young, some old, male and female—are all very natural.

Starting with Ryogoku, the app will be expanded to Ginza and Nihonbashi areas 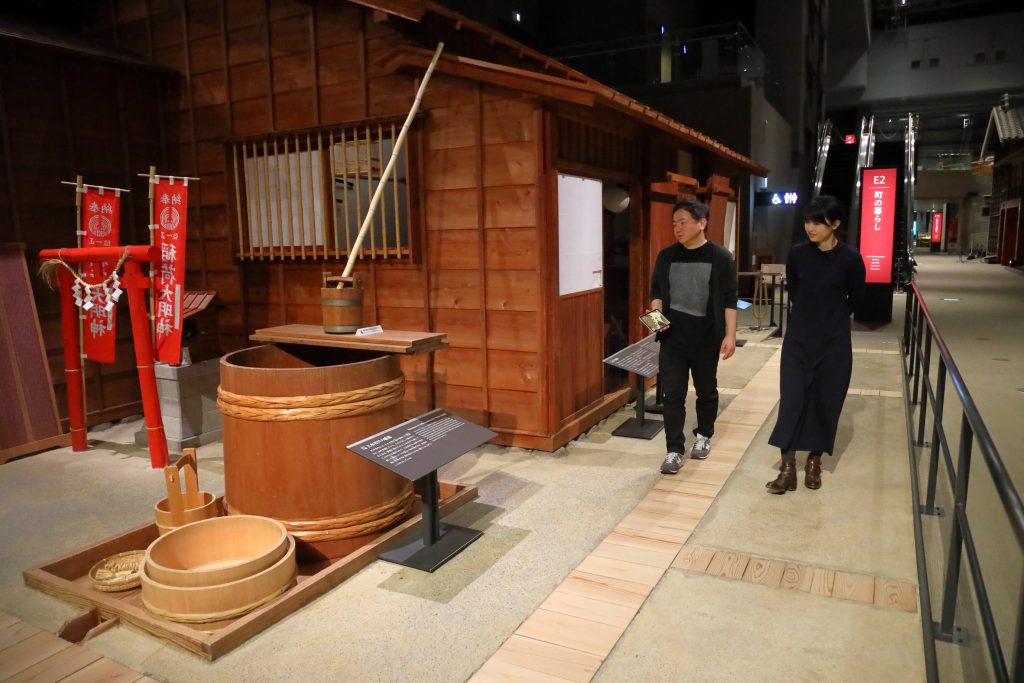 Around the partitioned row houses in the Edo-Tokyo Museum’s permanent exhibition, the starting point of the game

The meticulous level of detail that went into the app is truly characteristic of the Edo-Tokyo Museum. However, the team was also careful not to become too tied down by historical evidence.

Haruki More than anything, we want to get people to see the items in the Edo-Tokyo Museum’s collection. At the same time, focusing too much on the items will weaken the link between the app’s story and the items, and we will end up with something that feels forced and unnatural. I think people will appreciate it as great content when the items in the collection seem to connect organically with the story while retaining its entertainment value.

Taniguchi I totally agree. As game designers, we tend to think that it would be more fun to create content that allows users to move around the museum however they like and collect items as they go, like in Pokémon GO. But that would mean that the users would not be able to gain any knowledge or insights from the items available at the Edo-Tokyo Museum. The aim of this project was to have users interact with the Edo-Tokyo Museum’s collection while having fun, and to spark their interest in the history and culture of Edo. We were careful not to lose sight of that point. 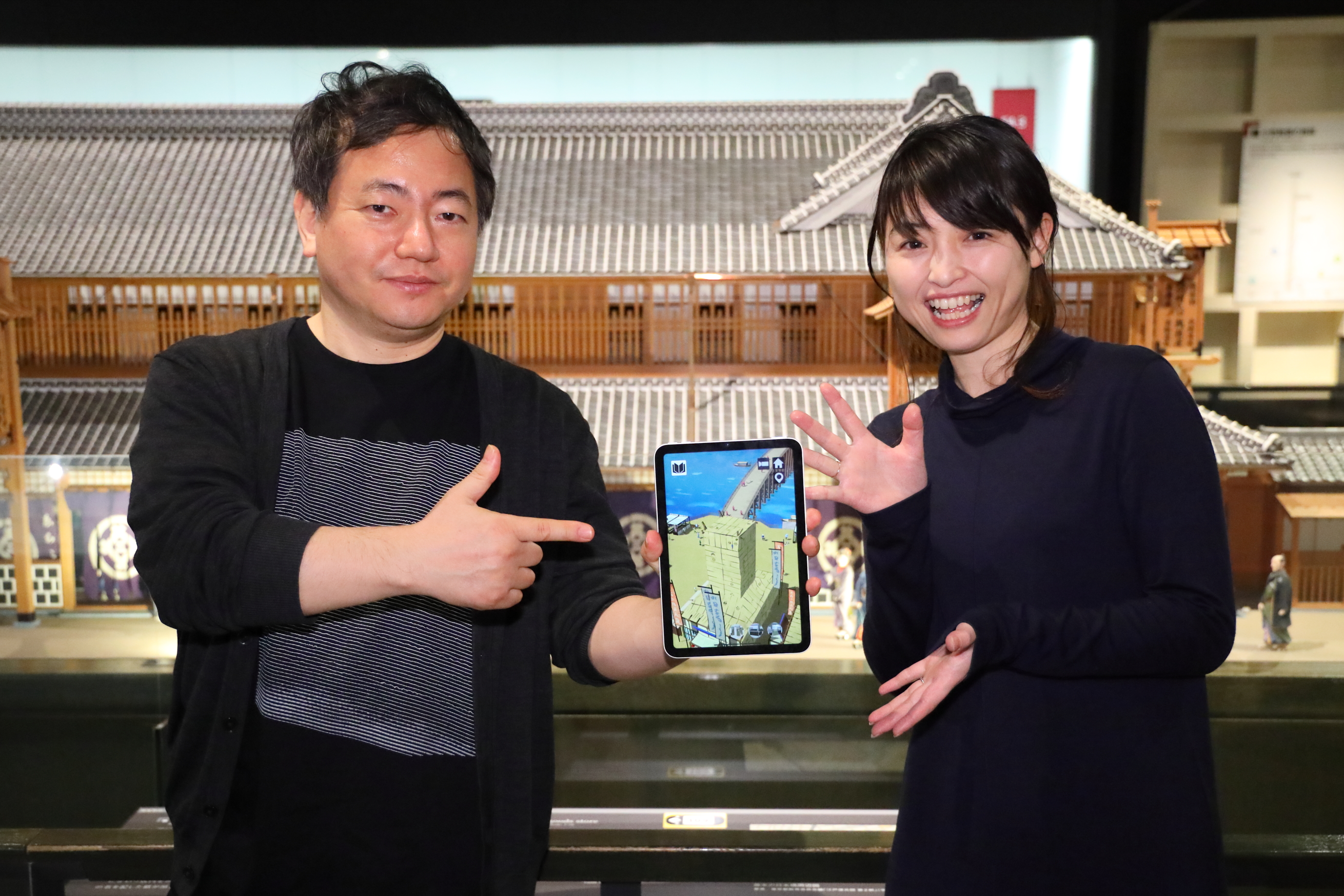 The app also makes it easy for users to enjoy the museum’s collection while commuting to and from work or school.

Haruki This project definitely involved a lot of trial and error, but I can say with confidence that we were able to create a groundbreaking museum app. We hope that by using this app, users will develop a greater level of interest in Edo and Tokyo.

The current version of the app that has been released is “Ryogoku: Edo’s Entertainment District,” but more content will be added in the future, such as “Ginza: The Birth of Tokyo.” Future versions will enable users to transcend time and space to learn about different areas of Tokyo and the lives of people who lived there, not only during the Edo period, but also in the subsequent Meiji era and beyond. Why not take this opportunity to deepen your knowledge of the history of Edo and Tokyo while playing around with the app?