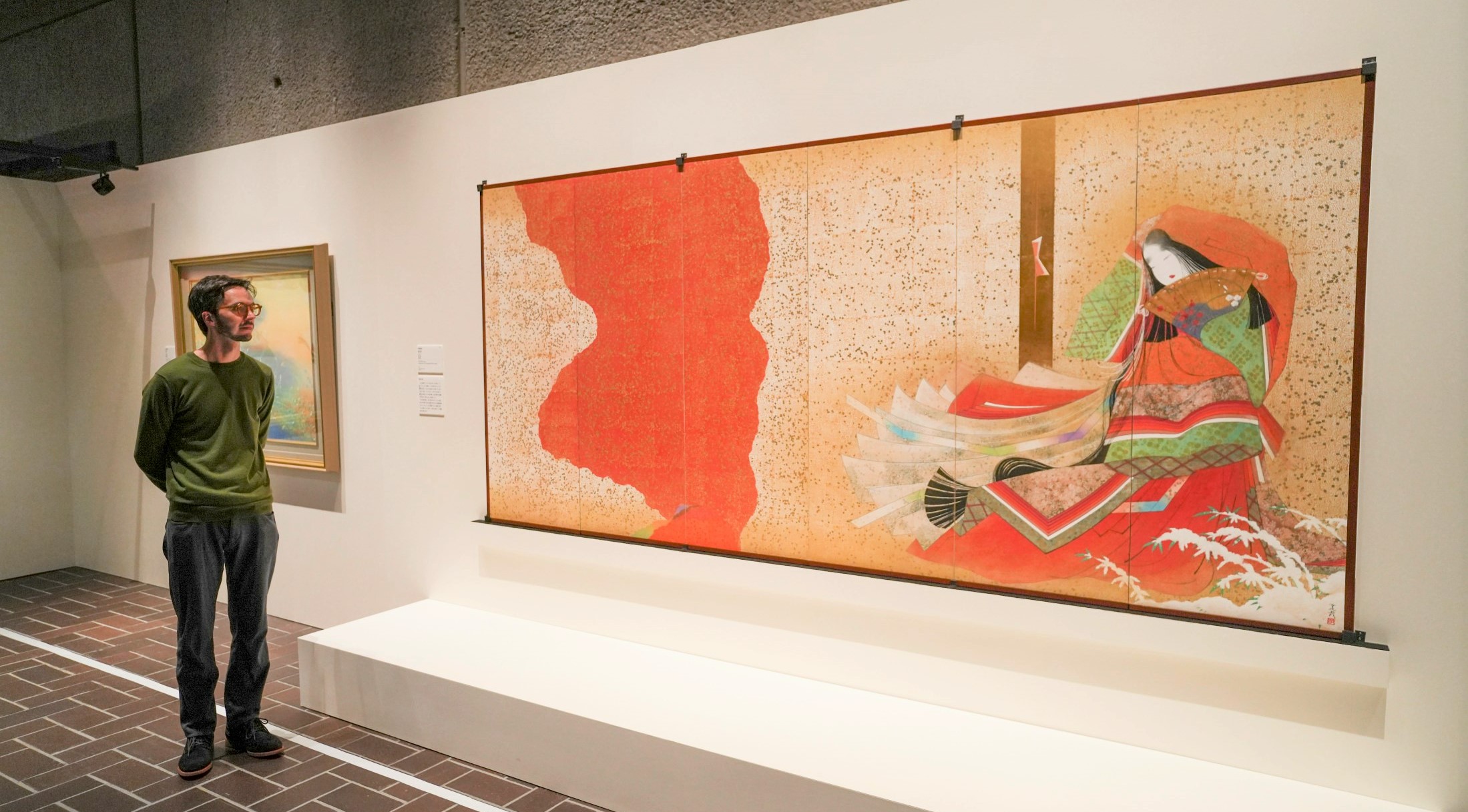 The Tale of Genji was penned in the early 11th century by Murasaki Shikibu, a noblewoman and lady-in-waiting in Kyoto during the Heian period (late 8-12th century). A symbol of classical Japanese literature now translated into over 30 languages, the story has enthralled readers around the world for close to a thousand years. The Tokyo Metropolitan Art Museum is currently hosting two exhibitions on the theme of The Tale of Genji until January 6, 2023. “Ueno Artist Project 2022: ‘Beauty Nurtured by The Tale of Genji —It is Fate that Brings Us Together,’” an exhibition bringing together the work of seven contemporary artists, is complemented by “The Tale of Genji and Edo Culture,” which introduces the various ways that The Tale of Genji spread in Edo culture.

American-born resident of Japan Sam Holden visited the exhibition and offers an outsider’s perspective on the allure of The Tale of Genji.

The Tale of Genji as a wellspring of Japanese beauty

The Tale of Genji, an 11th-century story of love, friendship, and loyalty, is an internationally celebrated symbol of Japanese culture. For almost a millennium, it has inspired a rich variety of artistic and literary works. Two simultaneous exhibitions being held at the Tokyo Metropolitan Art Museum introduce a broad range creative expression that taps into this wellspring of Japanese beauty, from feudal times as well as contemporary artists.

“The Tale of Genji and Edo Culture” presents works and artifacts from the collection of the Edo-Tokyo Museum, showing how The Tale of Genji reached new heights of popularity as a result of advances in printing culture during the Edo period (1603-1867). “Ueno Artist Project 2022: ‘Beauty Nurtured by The Tale of Genji —It is Fate that Brings Us Together’” presents works of calligraphy and painting, as well as glass and textiles, by seven 20th and 21st century artists, each of whom draws upon the aesthetic lineage of The Tale of Genji to create stunningly original artworks. 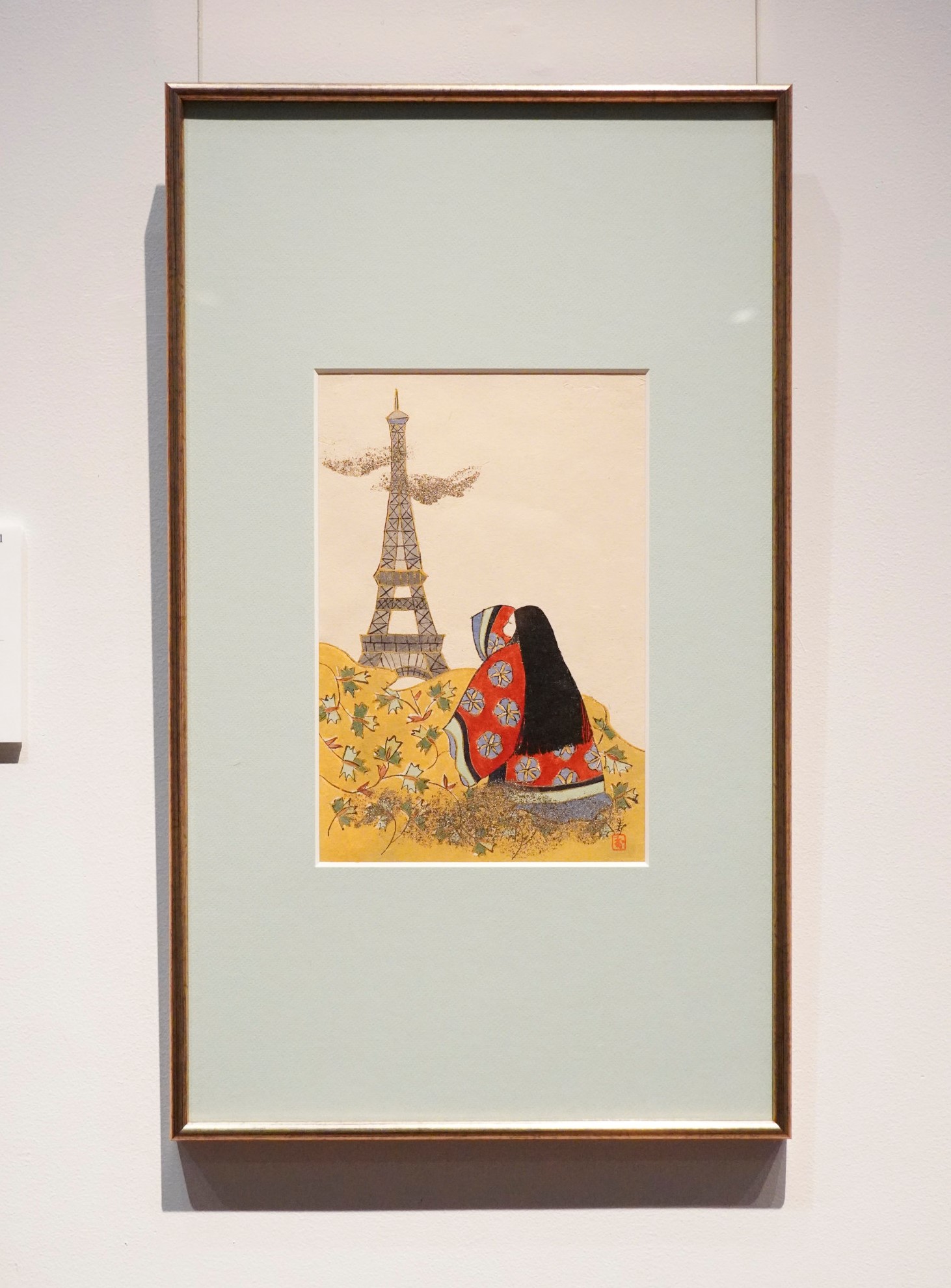 Developing an interest in Japan as a child, I encountered The Tale of Genji as a symbol of a distinctive Japanese aesthetic before I understoof it as a work of literature. The figures, clothing, architecture and vivid colors of the 12th century Tale of Genji Scroll are one of my earliest impressions of Japanese culture.  It was only much later that I learned that these images emerged from a Heian period (late 8-12th century) story that is known around the world as a classic of Japanese literature and sometimes referred to as the “world’s oldest novel.”

Wakamurasaki in Paris, a playful painting by AOKI Sue on display as part of “Beauty Nurtured by The Tale of Genji,” imagines a young Murasaki gazing at the Eiffel Tower. This image seems to hint at how in modern times, The Tale of Genji has inspired people around the world, who gaze back upon it as a symbol of Japanese beauty.

Of the two exhibitions, “The Tale of Genji and Edo Culture” offers insight into how The Tale of Genji spread to achieve widespread popularity. The exhibition features artworks and artifacts from the historical collection of the Edo-Tokyo Museum, currently closed for maintenance until sometime in FY2025 (planned). 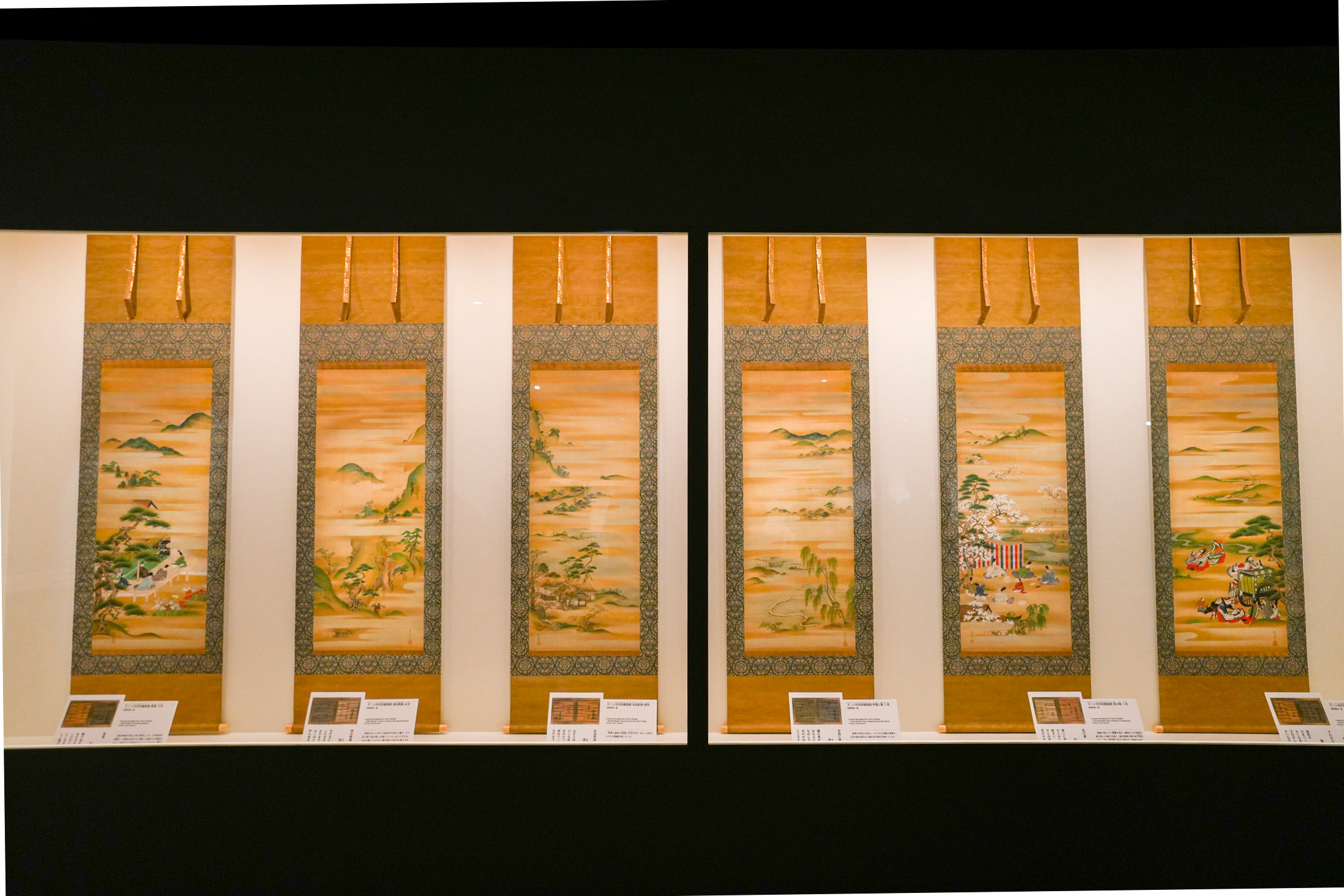 By the Edo period, The Tale of Genji was regarded as a symbol of a lost golden age of the 11th century imperial court, inspiring elegant seasonal decorations and kimono patterns that are among the items on display. Kano Naganobu’s Customs Throughout the Twelve Months, based on waka poems composed by Tokugawa lords and their retainers, employs various motifs from The Tale of Genji in landscape paintings depicting the four seasons.

The Edo period also saw great advances in printing technology, including movable type and woodblock printing, which allowed for the Tale of Genji to spread beyond the upper class to much wider audiences in the form of printed versions, illustrations, and other mass-market works. 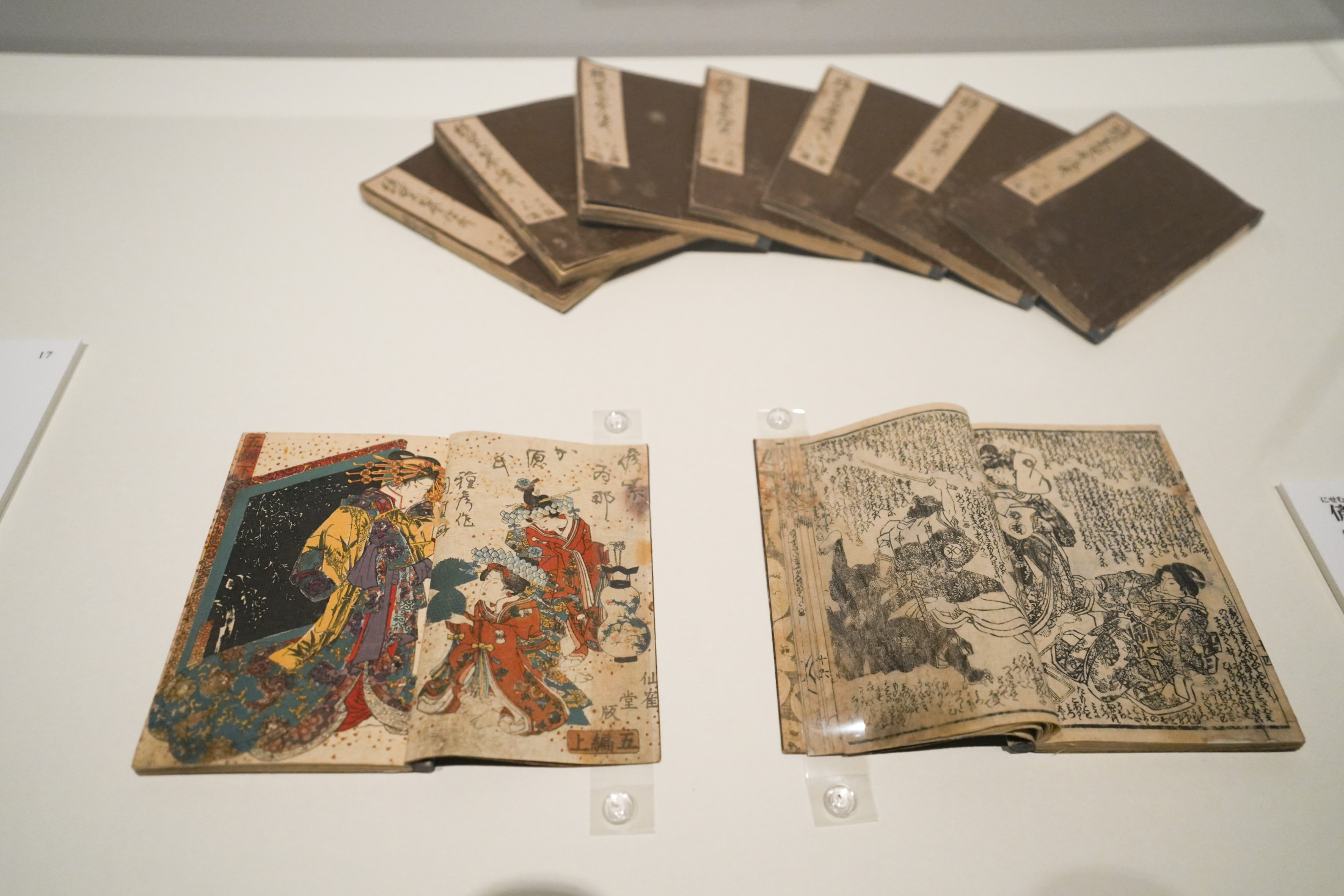 Chief among the products of this Edo culture is the Nise Murasaki Inaka Genji, an adaptation of Genji in which the setting and characters have been changed from the Heian period to the Muromachi period (14-16th century). To be more appealing to regular people in Edo, the story was remade into a good-and-evil tale following the son of the shogun as protagonist. Illustrations by the popular woodblock printer Utagawa KunisadaⅠ depict the characters in style of kimono and wearing the topknot haircuts that were emblematic of Edo style. 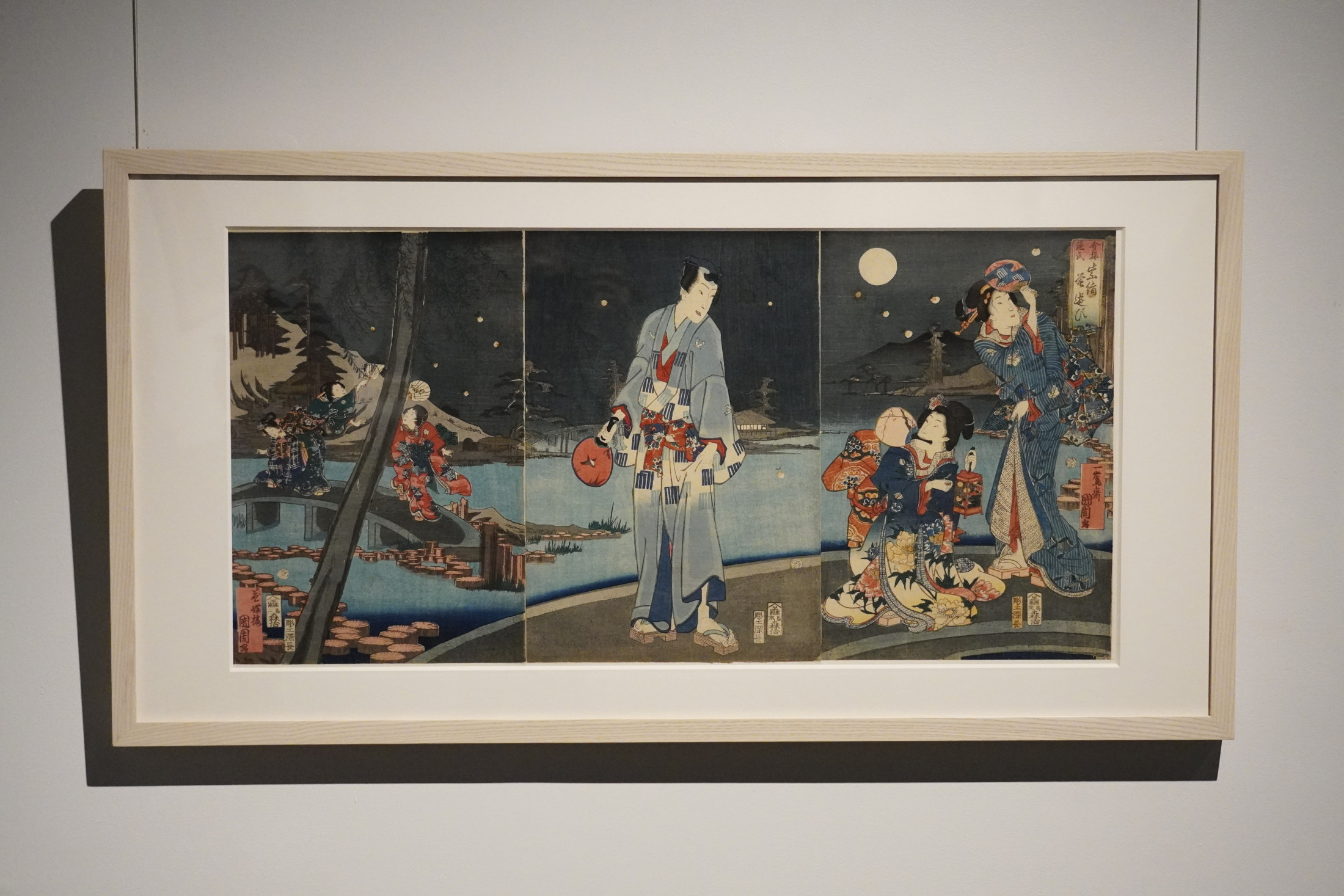 Nise Murasaki Inaka Genji became a bestseller before it was prohibited in the 1840s. Yet its popularity endured, with numerous illustrators creating pictures based on motifs of Inaka Genji. 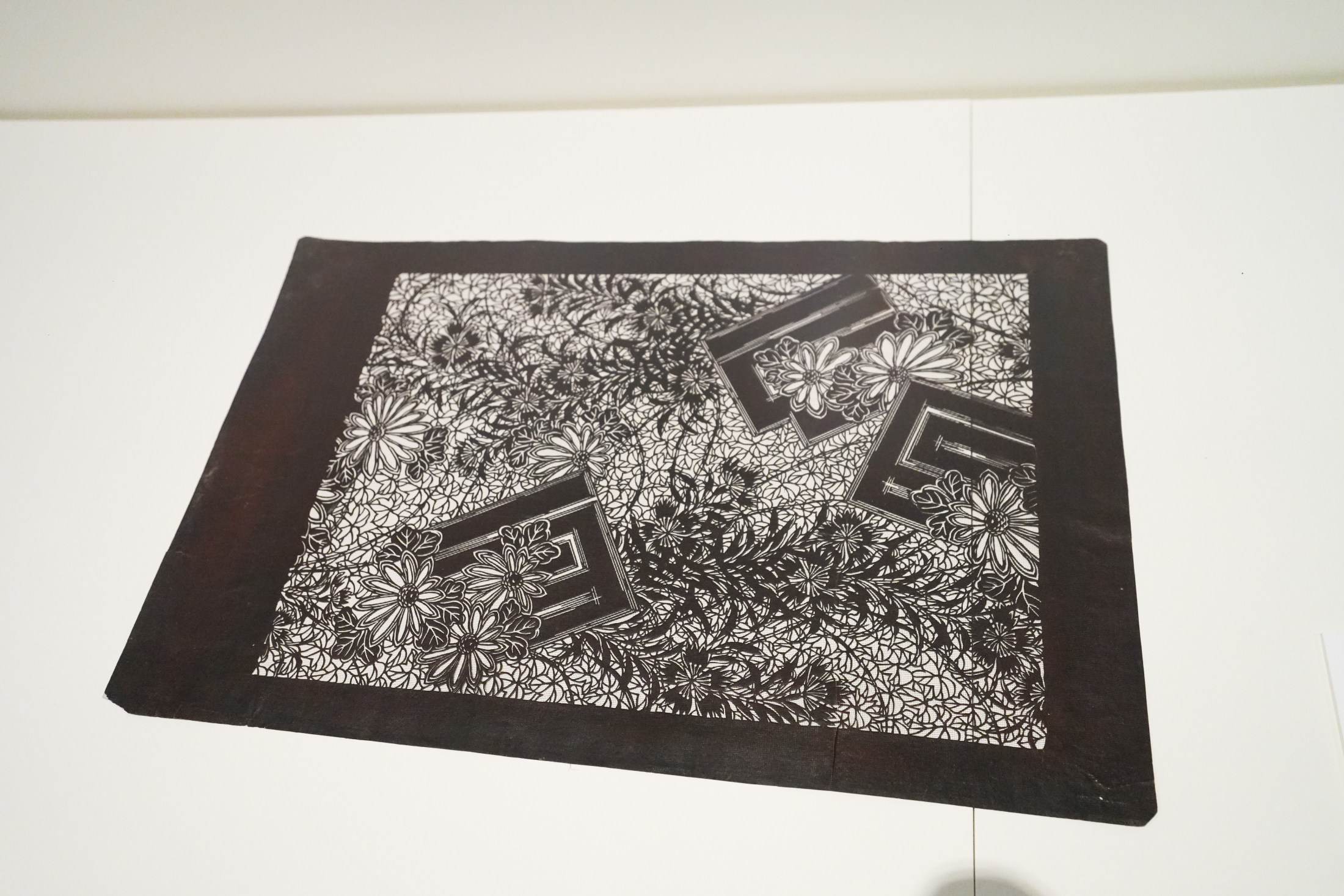 Nagaita-chūgata Stencil—‘Genjikō’ (motifs related to the Tale of Genji) design with chrysanthemums, Early 20th Century,Tokyo Metropolitan Edo-Tokyo Museum The “Genjikō” pattern, combining five vertical lines with horizontal lines, originated from the practice of kodo, the art of incense making, and all 52 types of incense diagrams take their names from volumes of “The Tale of Genji” except for “Kiritsubo” and “Yume no ukihashi.”

Eventually, patterns based on scenes from the story made their way into kabuki costumes, as well as fashion designs for samurai and Edo women. Kimonos and accessories with Genji-inspired patterns and designs were widely produced.

The second exhibition underway is this year’s installment of the Ueno Artists Project, a series launched in 2017 and now in its sixth iteration. “Beauty Nurtured by The Tale of Genji —It is Fate that Brings Us Together” gathers artworks by seven artists in a variety of mediums, each of whom interacts with the text or aesthetic of The Tale of Genji in different ways. 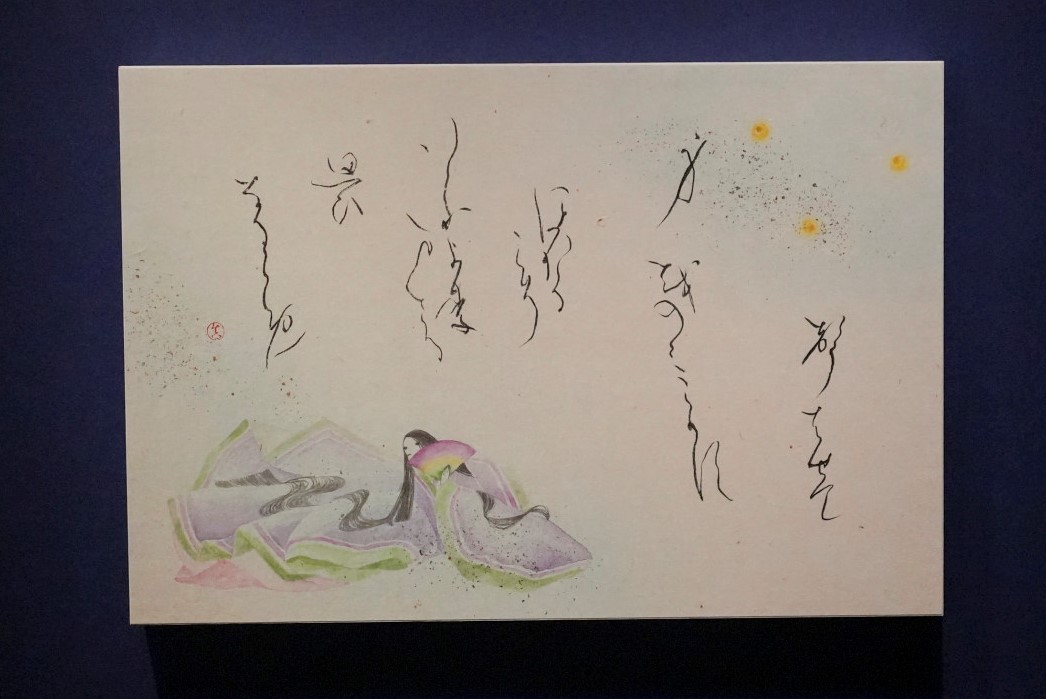 Takano Rihō, ’A Glimpse of Tamakazura’ from the ‘Hotaru’ [The Fireflies]Chapter  2022, Collection of the artist 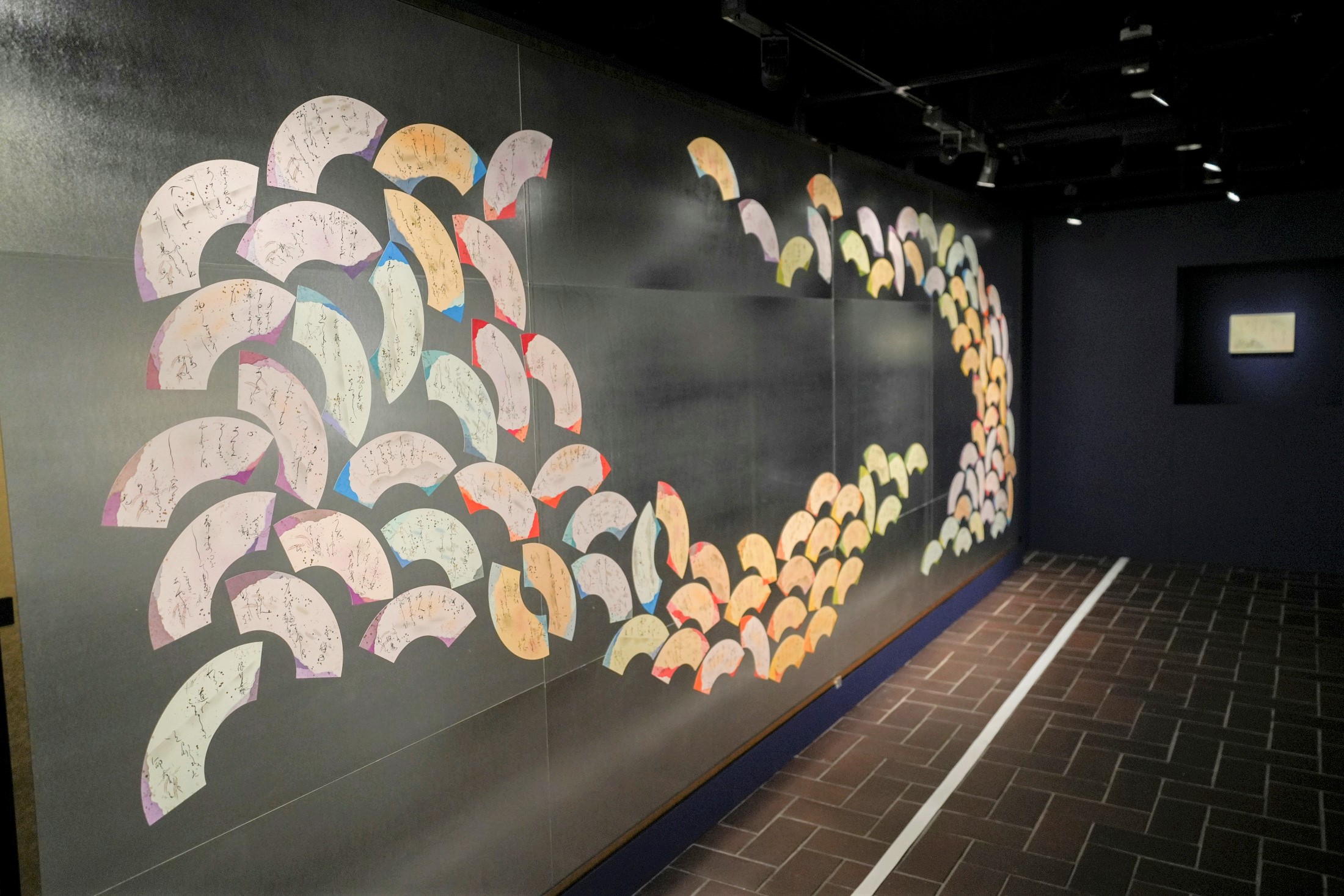 Takano Rihō, All things are constantly changing―Metempsychosis’ Exchanges Poems from the 54 Chapters of “The Tale of Genji” (‘Kiritsubo’ [The Paulownia Pavillion] to ‘Yume no ukihashi’ [The Floating Bridges of Dreams])  2022, Collection of the artist

The exhibition opens with a section of calligraphy, the art form most closely connected to the original text of The Tale of Genji, which contains 795 waka poems. Murasaki Shikibu wrote numerous notes about the handwriting of the various characters. Heian literature is written in the flowing style of script known as kuzushi-ji, which very few Japanese today can read. TAKANO Riho and TAKAGI Atsuhito, modern calligraphists trained in the traditional style, render sections of the poems in The Tale of Genji in script that is said to capture the emotions of the characters in its strokes. 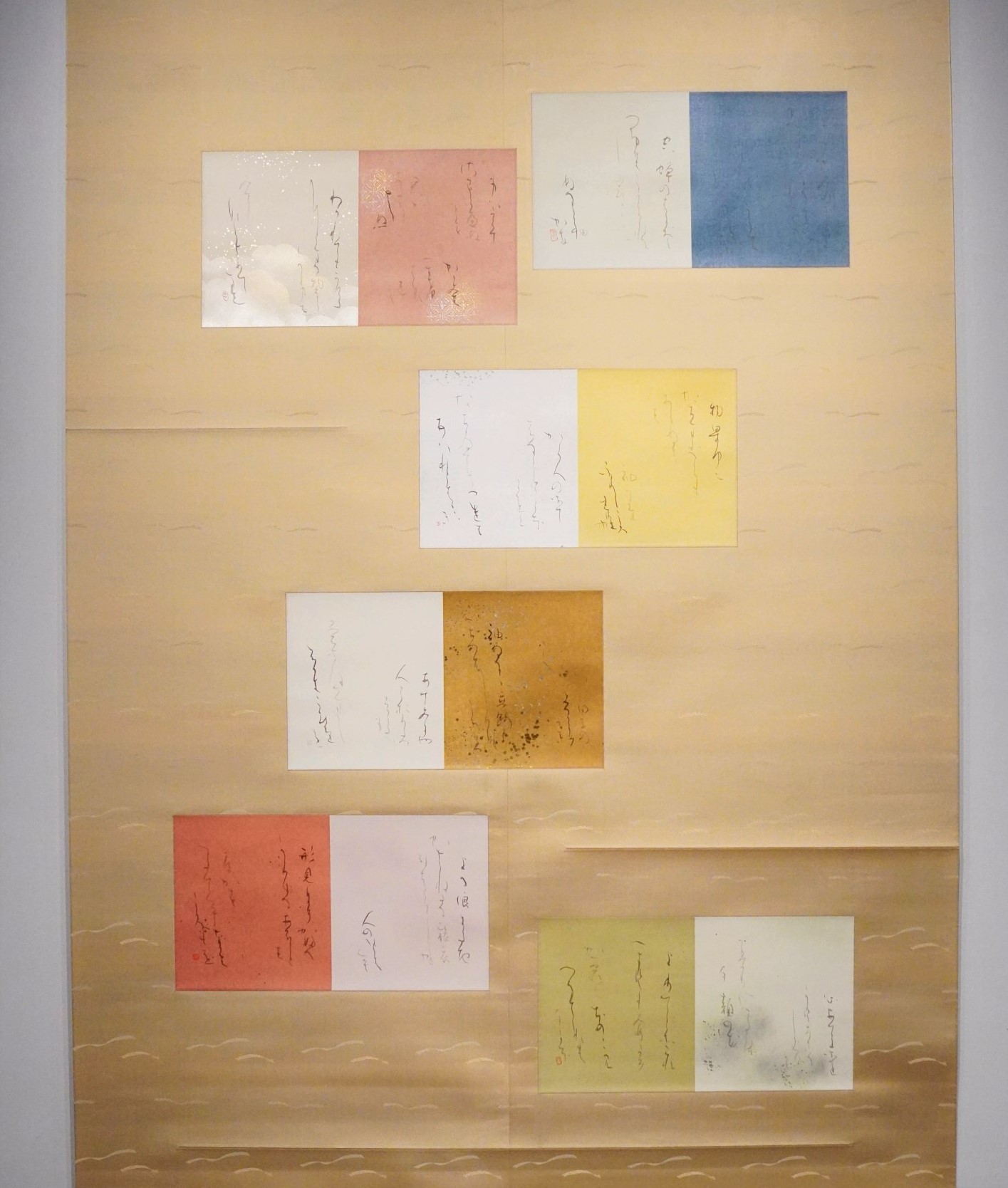 Some of The Tale of Genji’s poems represent correspondence between a man and woman, which TAKAGI writes across twin sheets of paper. Poetry in the Heian period was also a form of communication, and perhaps has something in common with our post-pandemic forms of remote interaction.

The exhibition continues with the second section, “The Elegance of the Imperial Court.” This section includes AOKI Sue, the artist of Wakamurasaki in Paris, whose paintings are presented alongside two vivid kimono decorated with Genji motifs. Also on display are stunning glassworks by TAMADA Kyoko, which encapsulate some of the timeless beauty of The Tale of Genji in physical form. 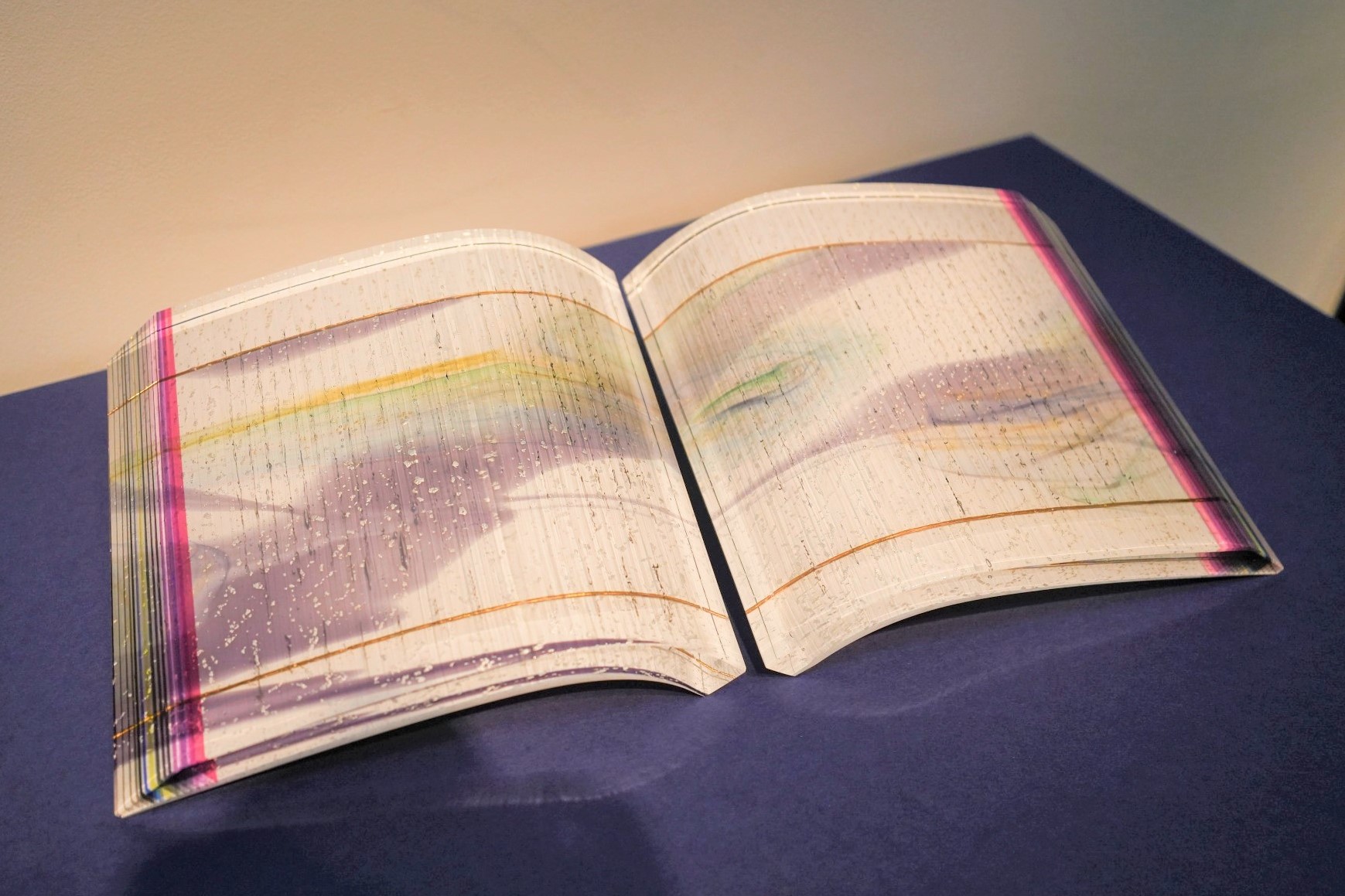 TAMADA Kyōko, Excerpt from ‘The Tale of Genji’ Eternally Capsuled in Glass: ’Murasaki no Yukari’ 2017, Collection of the artist

TAMADA’s glass sculptures take the form of open books, each of which encloses a rainbow of colors alongside passages from The Diary of Murakami Shikubu or waka poetry from The Tale of Genji. The thousand-year old words appear when seen from an angle, while the soft curves of her sculptures evoke the flowing lines of the script embedded within.

Continuing to the lower level, visitors are greeted by the large canvas works of ISHIODORI Tatsuya. ISHIODORI’s paintings depict evocative faces, folded kimono, screens, instruments, and plants on brilliantly colored backgrounds of gold, vermillion and blue, which struck me as the exhibition’s most immersive experience of Genji’s timeless beauty.

The exhibition concludes with the third section, “Looking at History,” featuring works by MORIYA Tadashi and WATANABE Hiroaki, two artists who compel viewers to think about history.

MORIYA, a historical painter who trained under Maeda Seison, depicts key scenes in the story on fan-shaped canvases that capture the affection, pain, and struggles of the characters in faint, misty colors, drawing us into particular situations across the gap of centuries.

On one canvas, A Thousand Year Romance―A Tale of Genji, the modern woman lies atop a surface made up of numerous scenes from the Tale of Genji, seemingly lost in thought as she gazes into the distance. Made with colored ballpoint pens, the images have a sharpness that accentuates the historical distance between foreground and background, giving the viewer a sense of the 1,000 years that separate these modern works of art from their original inspiration. 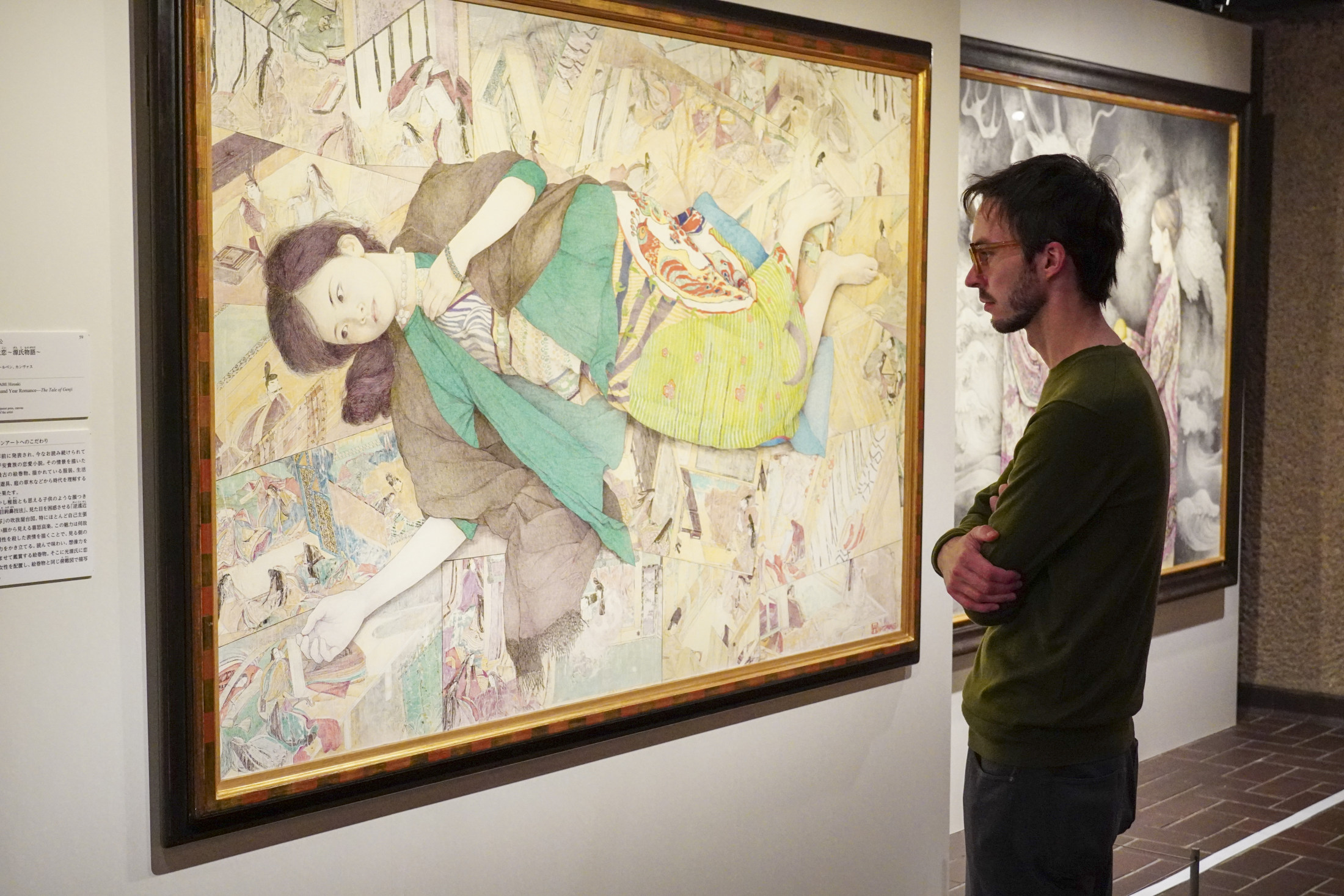 WATANABE Hiroaki, A Thousand Year Romance―A Tale of Genji 2016,Collection of the artist

“The Tale of Genji and Edo Culture” and the Ueno Artist Project 2022: “Beauty Nurtured by The Tale of Genji —It is Fate that Brings Us Together” offer a rewarding artistic experience of the distinctive sense of beauty that drew me to Japan as a child.

For those learning Japanese, a guide is available in easy Japanese, in addition to a junior guide for children. Some of the artworks displayed in “The Tale of Genji and Edo Culture” will be changed after December 20. Both exhibitions run until January 6th, 2023.

The Tokyo Metropolitan Foundation for History and Culture has produced a guidebook that introduces exhibitions in easy Japanese so that foreign residents in Japan and people learning Japanese can easily visit and enjoy museums. The guidebook introduces the exhibitions “The Tale of Genji and Edo Culture” at the Tokyo Metropolitan Art Museum and “Edo-Tokyo Museum Collection — Tokyo Through the Ages” at the Edo-Tokyo Open Air Architectural Museum, where visitors can learn about the culture of Edo and Tokyo. Please enjoy the guide at the exhibition.