Experience Edo Life and Culture in the Palm of Your Hand with Hyper Edohaku, the Edo-Tokyo Museum’s Smartphone App 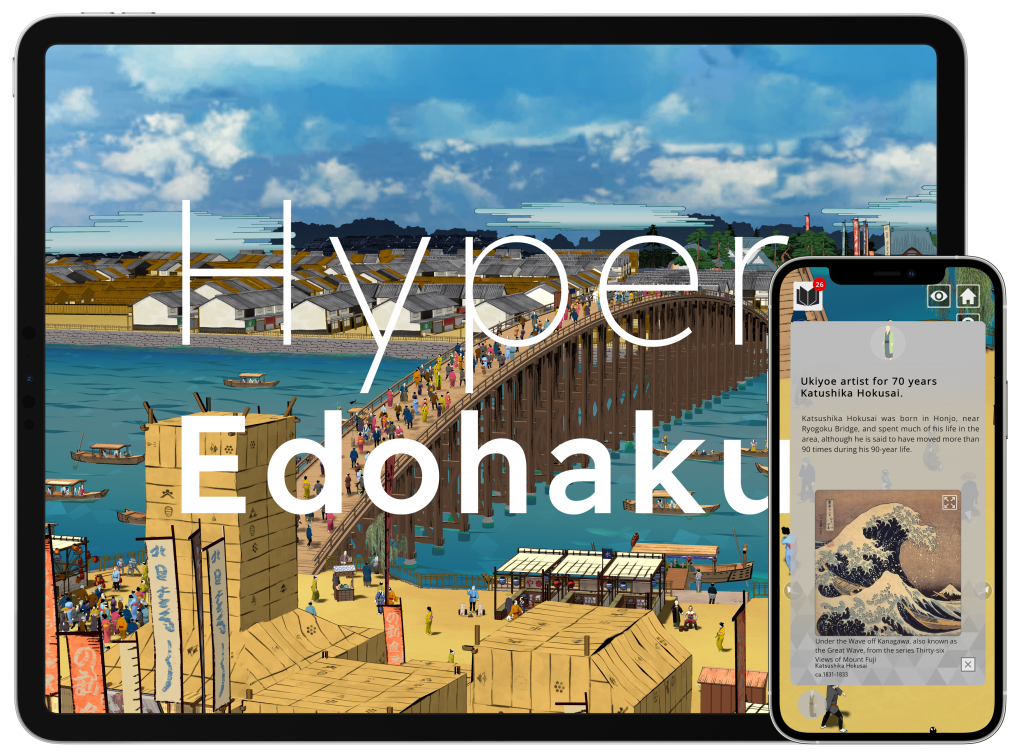 The Tokyo Metropolitan Edo-Tokyo Museum (abbreviated as “Edohaku” in Japanese) has been closed for major renovations from April 1, 2022, and will tentatively remain closed through fiscal 2025. To enable visitors to continue enjoying and learning more about the museum’s collection during this extended closure period, the museum released an interactive app called Hyper Edohaku on Friday, April 22. A press conference was held on the same day to announce the app’s launch. 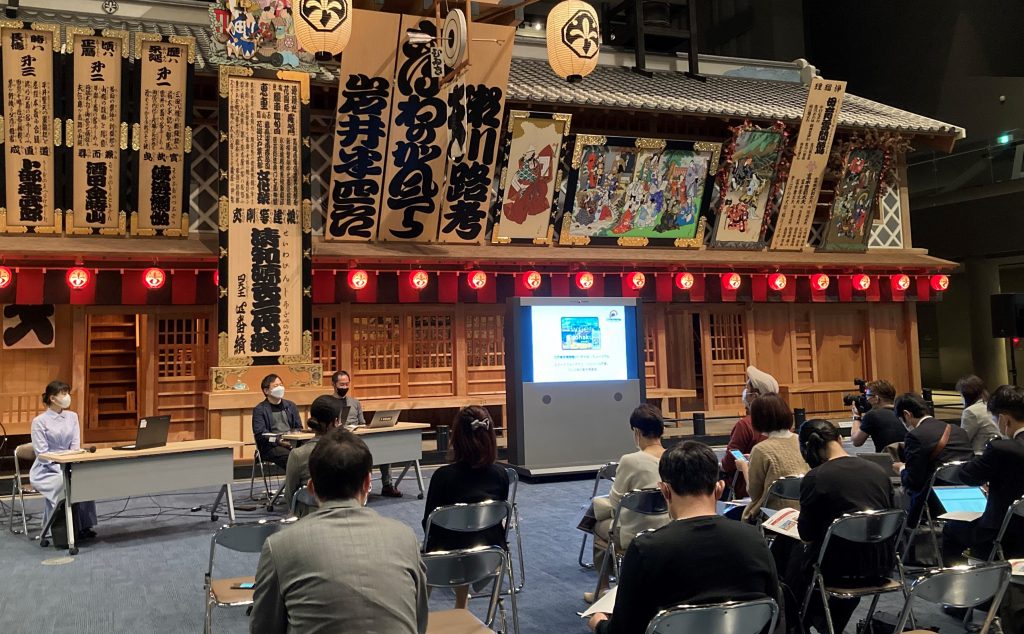 Hyper Edohaku was jointly developed by the Edo-Tokyo Museum and game studio Rhino Studios Inc. under the theme of “finding, discovering, and collecting Edo.” It is the first smartphone app released by a museum in Japan to be built with a full-fledged game engine.

The app was developed as part of the Tokyo Smart Culture Project, an initiative by the Tokyo Metropolitan Government that aims to digitize, record, and preserve cultural resources, including the collections of Tokyo’s cultural facilities, while providing a variety of formats for viewing them. At the press conference, Taro Nitta, chief of the Edo-Tokyo Museum’s project planning division, described the app as “the most advanced undertaking by any museum in Japan expanding its presence online.” It represents the museum’s attempt to create a completely new, never-before-seen form of virtual museum. 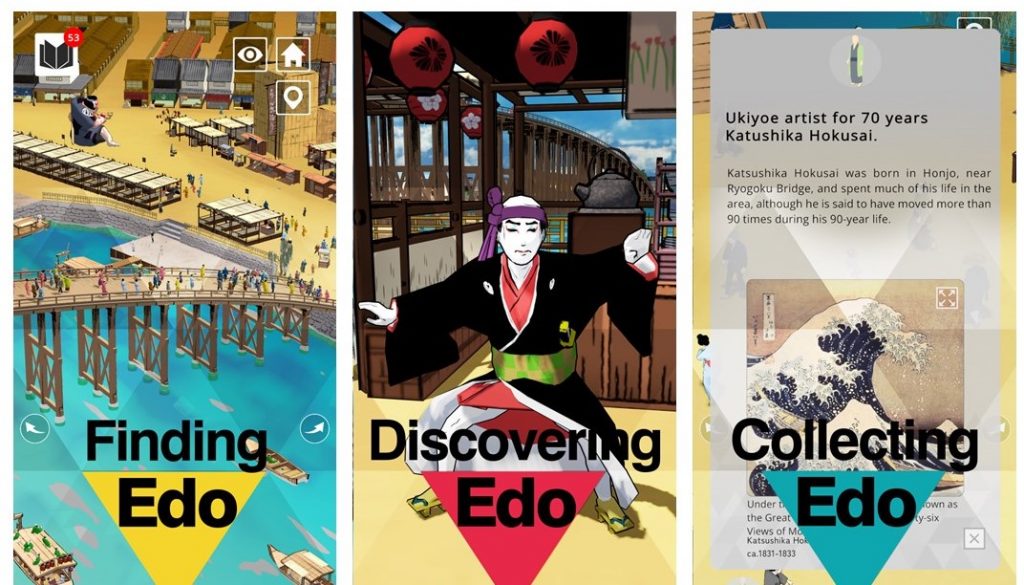 The app is set in the area around Ryogoku-bashi Bridge during the late Edo period (mid-18th century through mid-19th century), on the busy day of the annual Sumida River Fireworks Festival. This area was the most exciting place to be in Edo at the time. Users will take on the role of “Edohakun“, a teenager who lives in a local nagaya (row house). Edohakun’s mission is to find and collect one hundred items selected from the Edo-Tokyo Museum’s collection of about 370,000 items. Along the way, he will get to see the Misemono spectacle show and meet famous individuals such as the ukiyo-e artist Katsushika Hokusai. 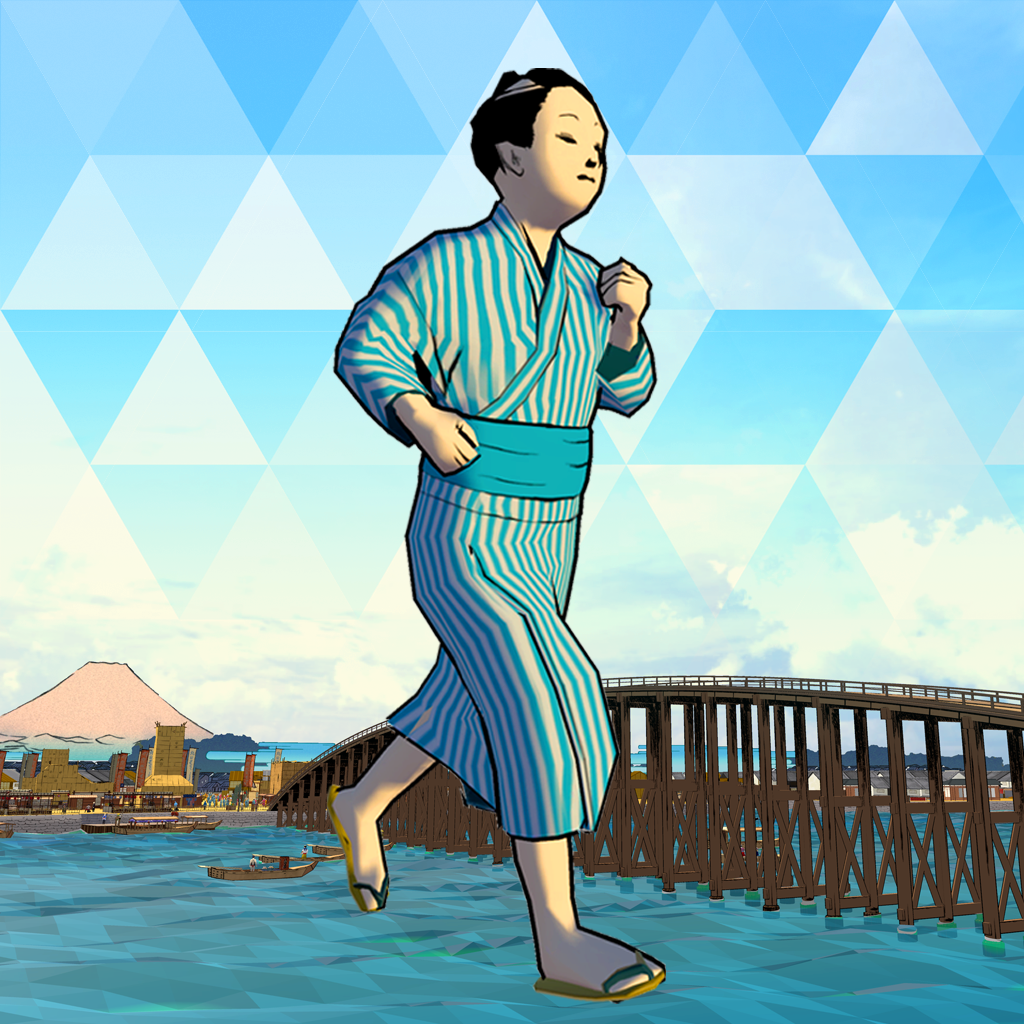 Users explore the streets of Edo as “Edohakun”

“For example, when users tap on the camel, the item outlined in white at the spectacle show, the item they are looking for will appear. This is an actual flyer (printed material) from the spectacle show, and it pops up with some interesting commentary from an Edo-Tokyo Museum curator: ‘It is said that the event was such a great hit that more than 5,000 people attended in a single day.’ The items users collect can be stored and viewed again later, or even enlarged on their smartphone screens, which will allow them to make new discoveries by seeing details they might not have noticed in a regular exhibition,” says creative producer Hitoshi Taguchi. 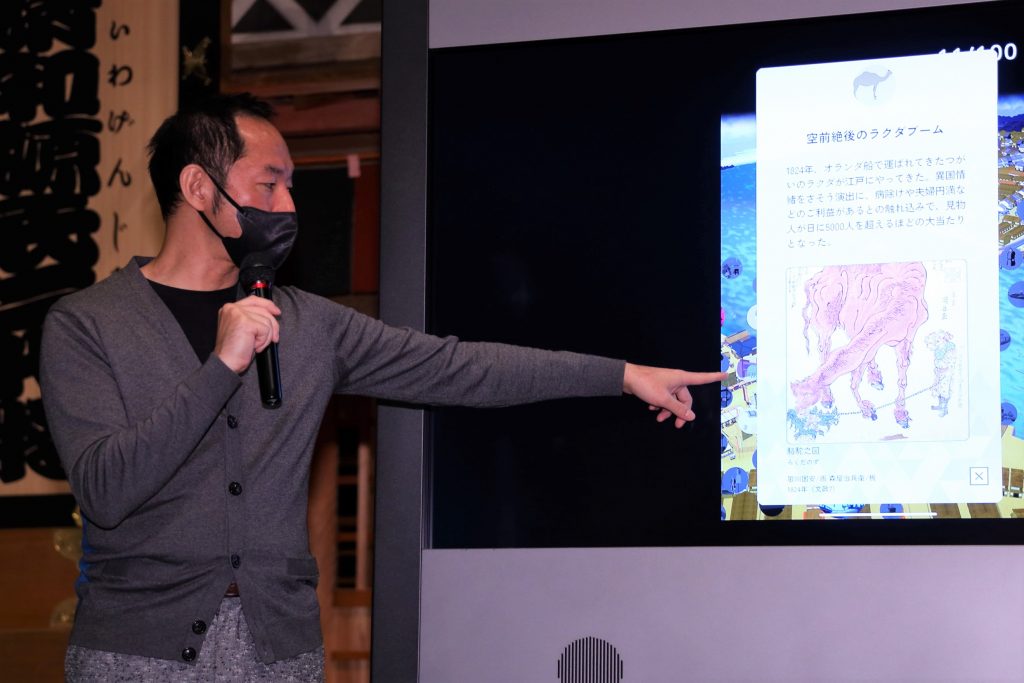 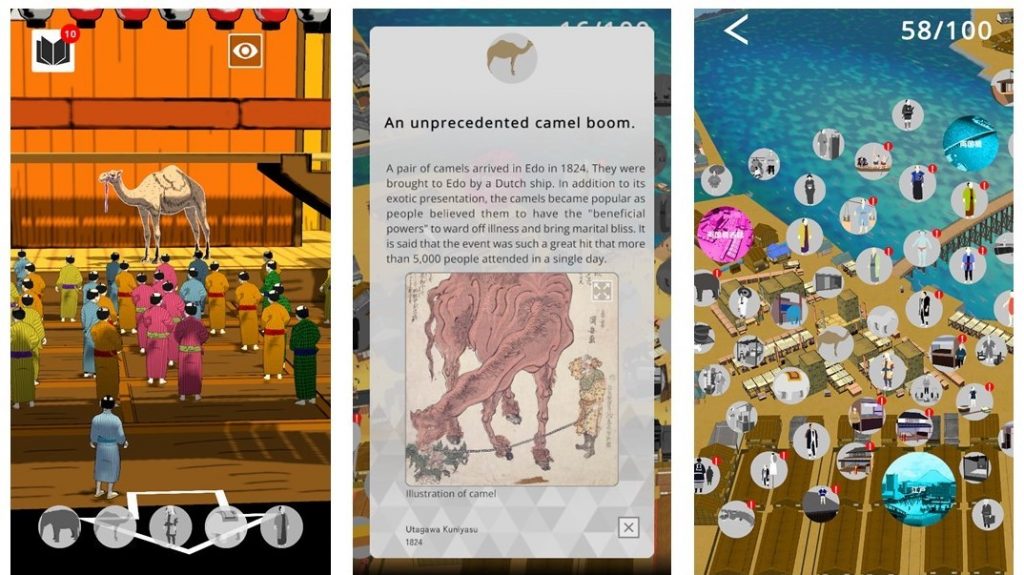 When the user taps on the camel at the spectacle show (left), an item related to the camel appears (middle). The items the user has collected are archived (right) and can be viewed again later.

Another aspect of the app that makes it so appealing is the incredibly immersive Edo-period space that users are allowed to explore. This space was faithfully reproduced based on a model of the western bank of the Ryogoku-bashi Bridge in the Edo-Tokyo Museum’s permanent exhibition, under the leadership of Katsuya Taniguchi, director at Rhino Studios Inc. The production team also designed unique characters based on the museum’s collection of paintings and illustrations, such as the kappa (a creature from Japanese folklore) and a Niwaka (improvisational theater) performer dressed in costume to enliven the atmosphere. 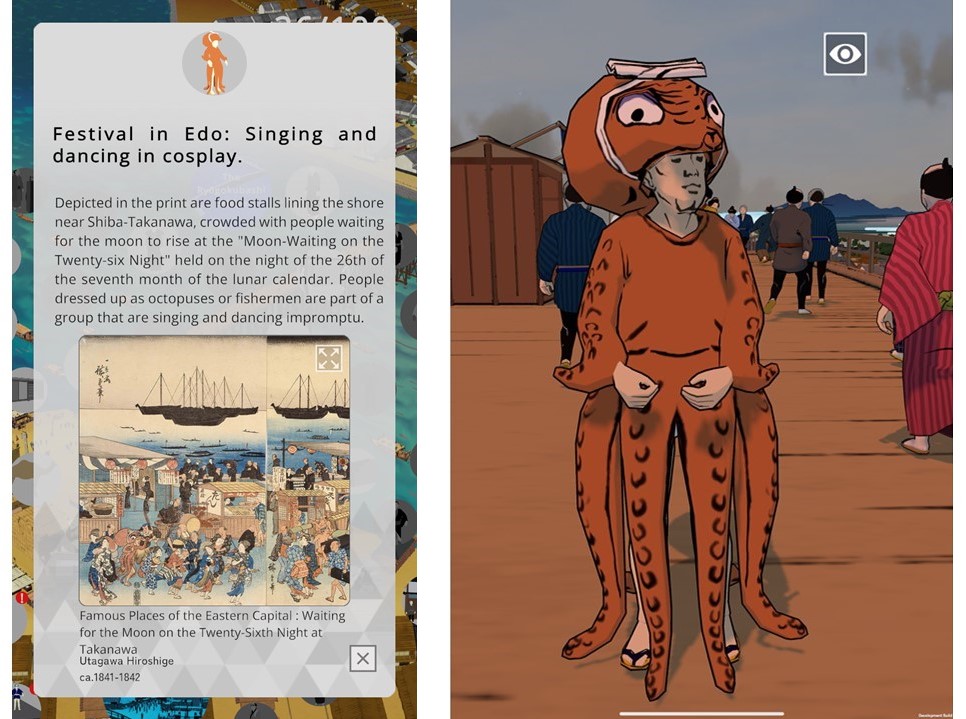 The figure dressed as an octopus on the right is based on a member from an improvisational theater group called the Niwaka, who was depicted in an ukiyo-e woodblock print by Utagawa Hiroshige.

In total, Hyper Edohaku features 112 diverse characters, from peddlers to sumo wrestlers to camels and elephants, all brought to life based on materials provided by the Edo-Tokyo Museum. The gestures, gait, and mannerisms of Edo people, which differ from those of people today, were recreated using motion capture recordings of the movements of Ryotaro Fujima, a professional male Nihon Buyo performer who can also perform in female roles. 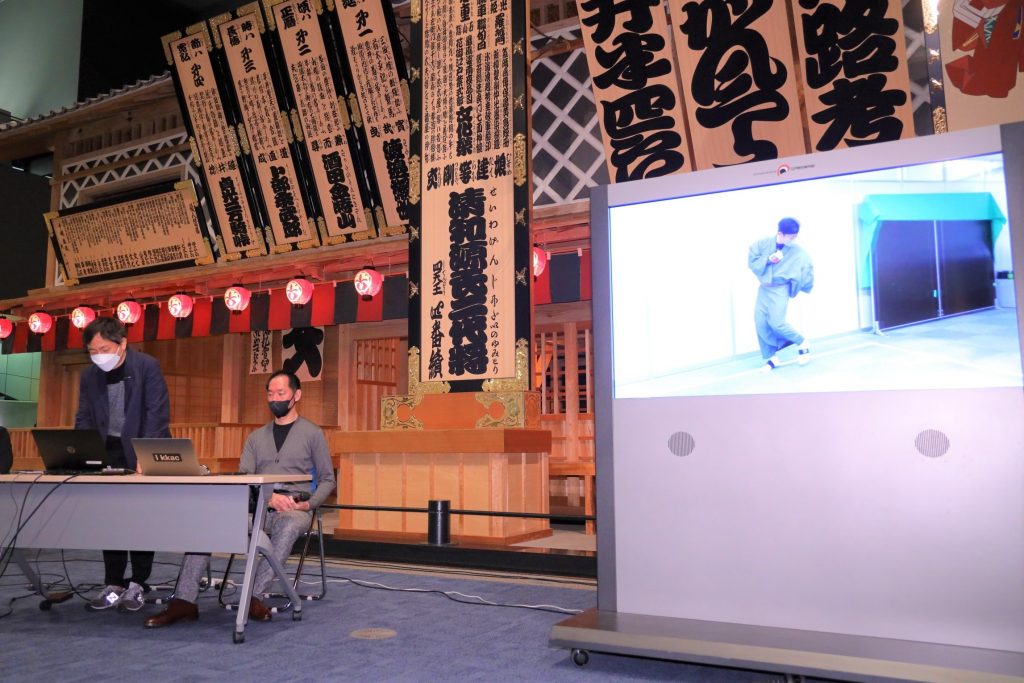 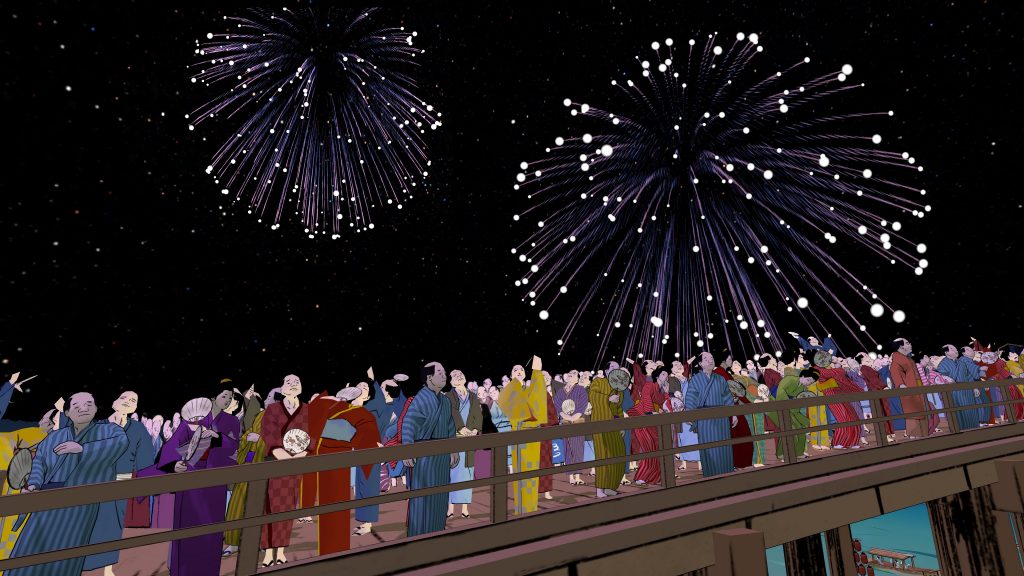 Users can experience the lifestyle of Edo people through events such as the Sumida River fireworks show.

Hyper Edohaku is unique in that it invites users to actively collect items and expand their knowledge in a meticulously designed Edo-period space. Shoko Haruki, curator at the Edo-Tokyo Museum, says that the app “has added new value to the way in which the museum communicates information, which used to be a one-way street,” and that she expects great things to come from it. 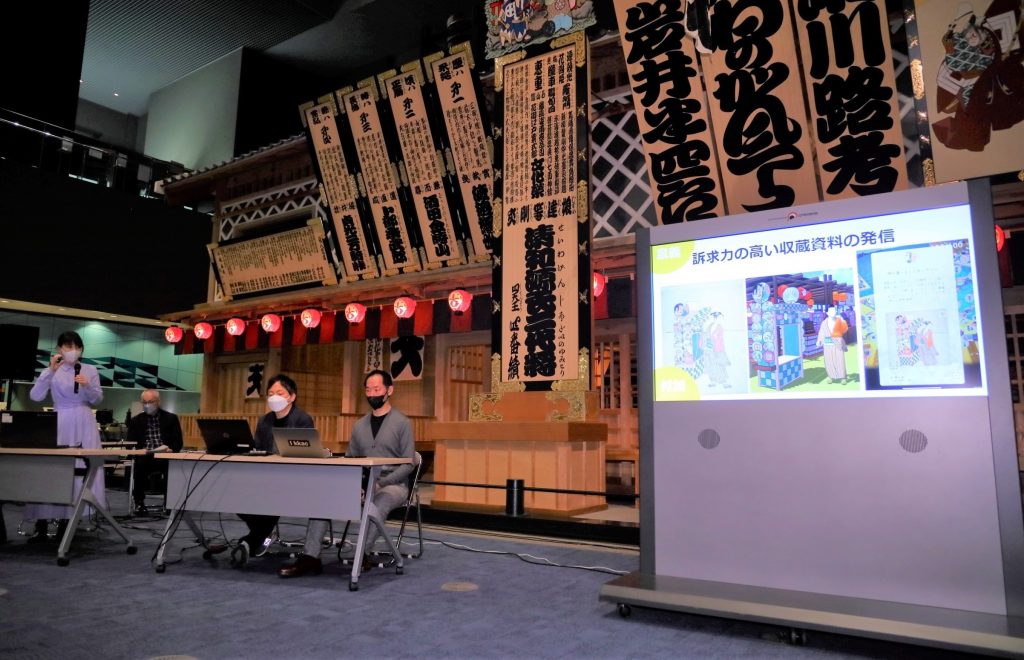 Shoko Haruki, curator at the Edo-Tokyo Museum, explains the significance of the app for the museum

“This app conveys the fascinating appeal of materials that have tended to be overlooked in regular exhibitions, accompanied by a realistic sense of the atmosphere of Edo’s entertainment districts. Its development is a breakthrough in the history of museums in that it proposes a new way to present the collection. Please feel free to have fun with this app, as though you are ‘taking Edo with along with you,’” says Haruki. 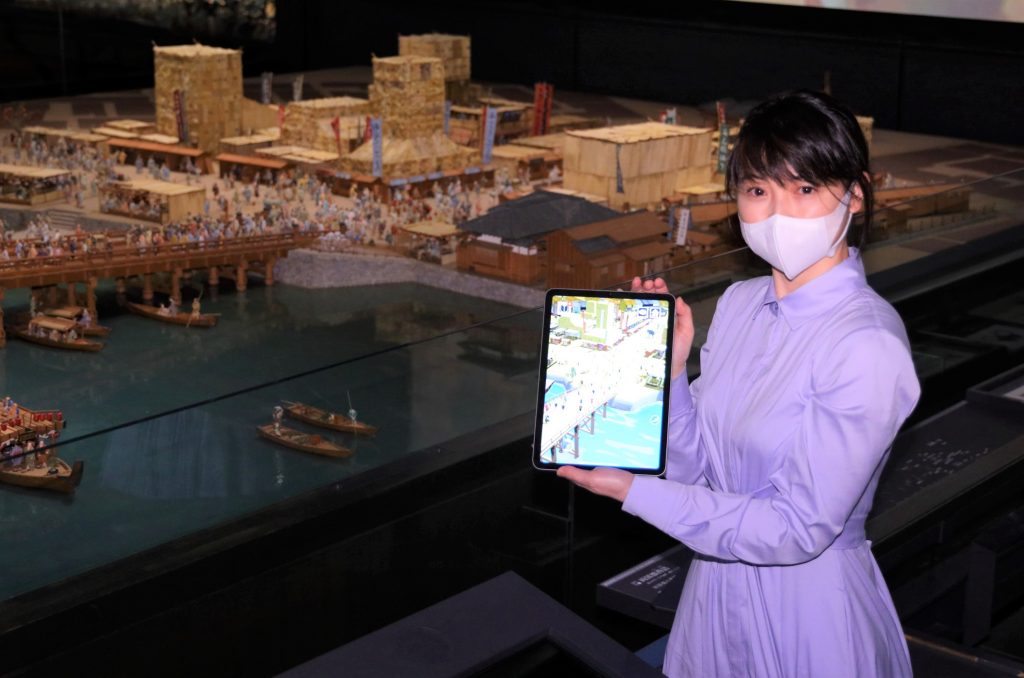 In front of the model of the western bank of the Ryogoku-bashi Bridge, the setting of the app

At this time, the Hyper Edohaku has only been released for iOS devices. The Android version is scheduled for release at the end of June. In addition, the app has been designed to be continuously updated with new content. Following Ryogoku: Edo’s Entertainment District, the area currently available in the app, new content set in the Ginza area of Tokyo is scheduled to be added during this fiscal year.