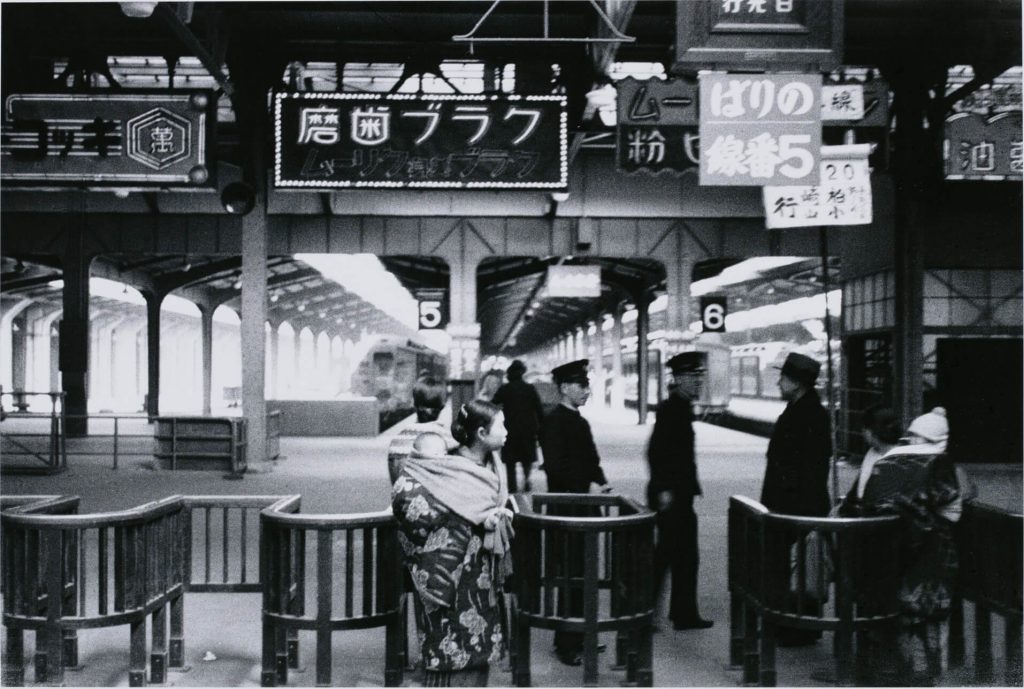 This exhibition shines a light on Ueno, the location of the Tokyo Metropolitan Art Museum, which has served as a key venue for the Public Entry Exhibitions since it first opened its doors in 1926. Drawing from the collections of the Tokyo Metropolitan Edo-Tokyo Museum, the Tokyo Photographic Art Museum, the Museum of Contemporary Art Tokyo, and others, the exhibition traces the changes in Ueno’s landscape from the final years of the Edo period to the Showa period (1860s-1980s). In tandem with this, the Tokyo Museum Collection: Integrated Database Search for Metropolitan Museums (abbreviated: ToMuCo) is holding a simultaneous online exhibition that introduces digital images retrieved using the keyword “Ueno Park.” The online exhibition will be available until January 6, 2022.

Both exhibitions are free to the public. Why not take this opportunity to explore the history of Ueno at the Tokyo Metropolitan Art Museum and ToMuCo?

The grounds of Ueno Park, now home to several museums and a zoo, were once part of Kan’ei-ji, a temple that was heavily patronized by the Tokugawa shogunate. Various developments over time have transformed the park into the cultural hub it is today. This exhibition comprises about 60 pieces of artwork and materials and unpacks the history of Ueno in four sections.

The National Industrial Exhibition and crowds in Ueno 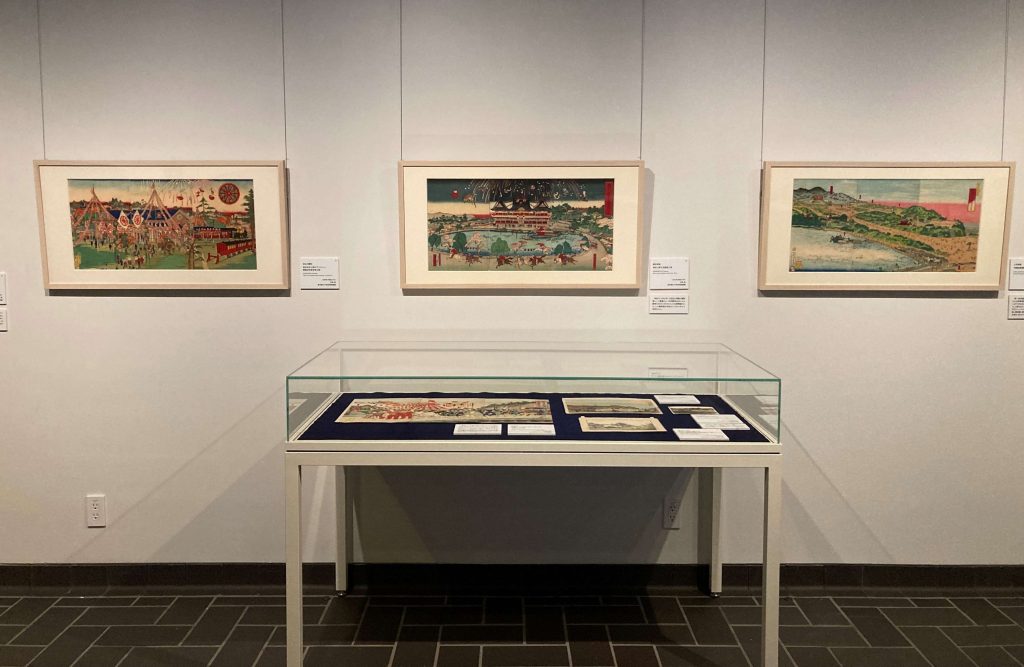 View of the first section of the exhibition

Section one, “The Era of the Boshin War and the National Industrial Exhibitions,” traces the history of Ueno from the decline of the Tokugawa shogunate at the end of the Edo period to the years following the Meiji Restoration. Ueno hill, where wild cherry blossom trees were transplanted from Mt. Yoshino in Nara, has been a popular place for cherry blossom viewing and relaxation by the common people since the mid-17th century. In 1868, however, this tranquil setting became the site of a battle of the Boshin War known as the Battle of Ueno. The battle took place within Kan’ei-ji, whose precincts dominated Ueno hill, and ended with the burning down of most of the temple buildings. Following this event, Ueno Park opened in 1876, utilizing the former site of the temple. 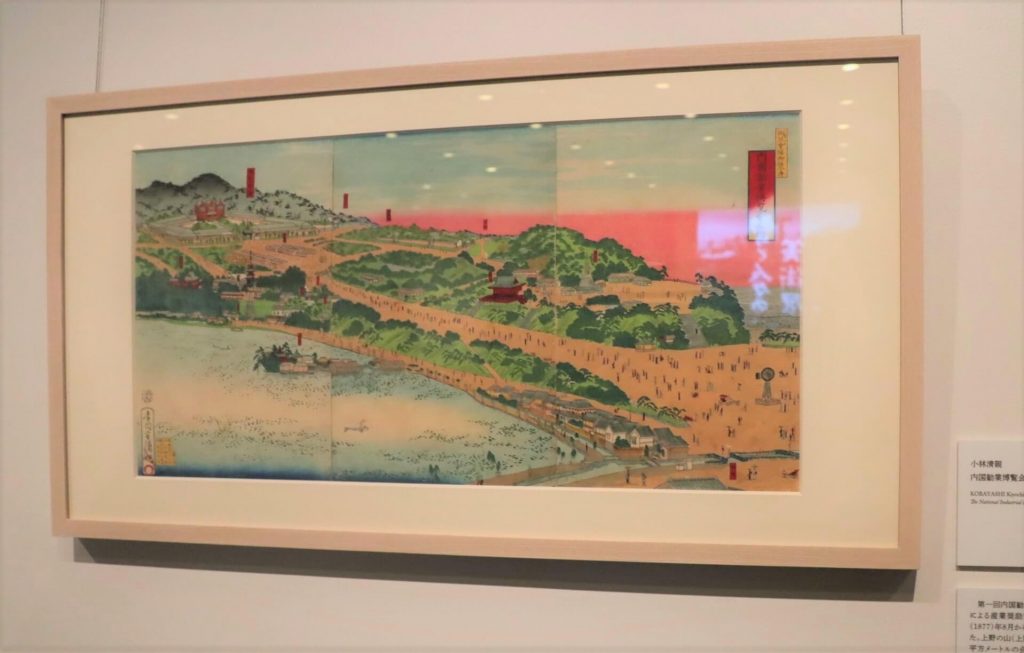 To promote industrial development, the new Meiji government held the National Industrial Exhibition, Japan’s first exposition, in Ueno in 1877. Ueno came to host a balloon flying show and various other events. Soon, the area contained museums, art galleries, a zoo, and even a horse racing track, becoming a stage for the “modernization” of Japan. 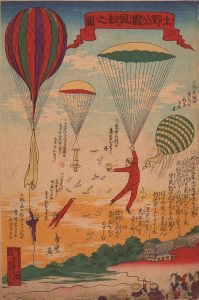 Depictions of Ueno at the time took the form of full-color printed commercial woodblock prints called nishiki-e (lit., “brocade pictures”), but photography also was beginning to emerge as a means of expression in the late Meiji era.

The Great Kanto Earthquake, reconstruction, and the launch of the Tokyo Prefectural Art Museum 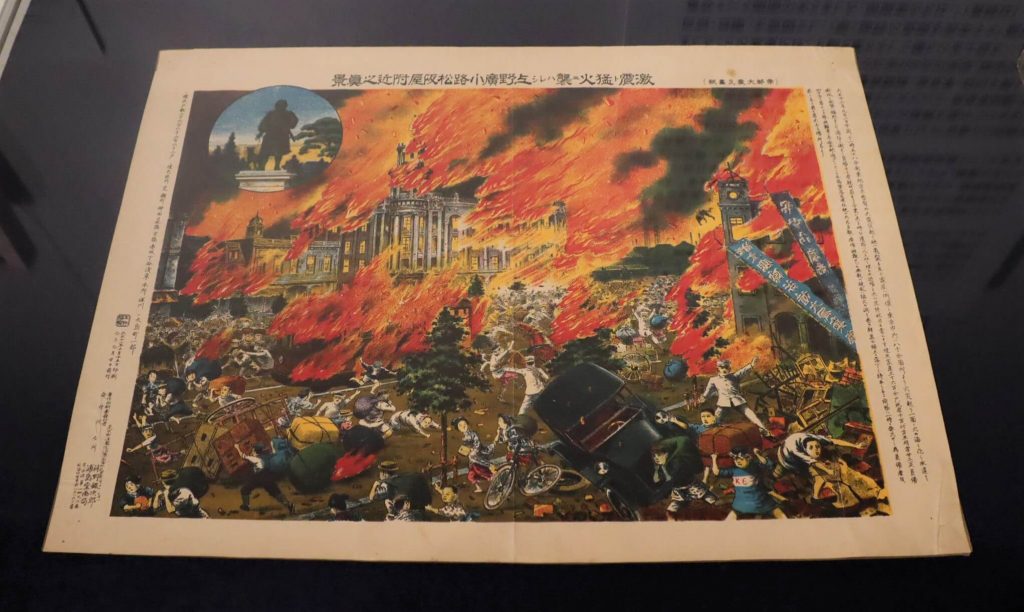 The Great Kanto Earthquake of 1923, together with ensuing fires, wreaked devastation across Tokyo. Hordes of people are said to have gathered in Ueno Park, where they lived as evacuees. Section two, “The Great Kanto Earthquake and Reconstruction Efforts,” examines the dramatic changes that Ueno underwent in this short span of time. This section captures Ueno at the time of the earthquake, which many art magazines covered, and shows how the district was rebuilt, as documented in the series of prints titled A Hundred Views of New Tokyo. 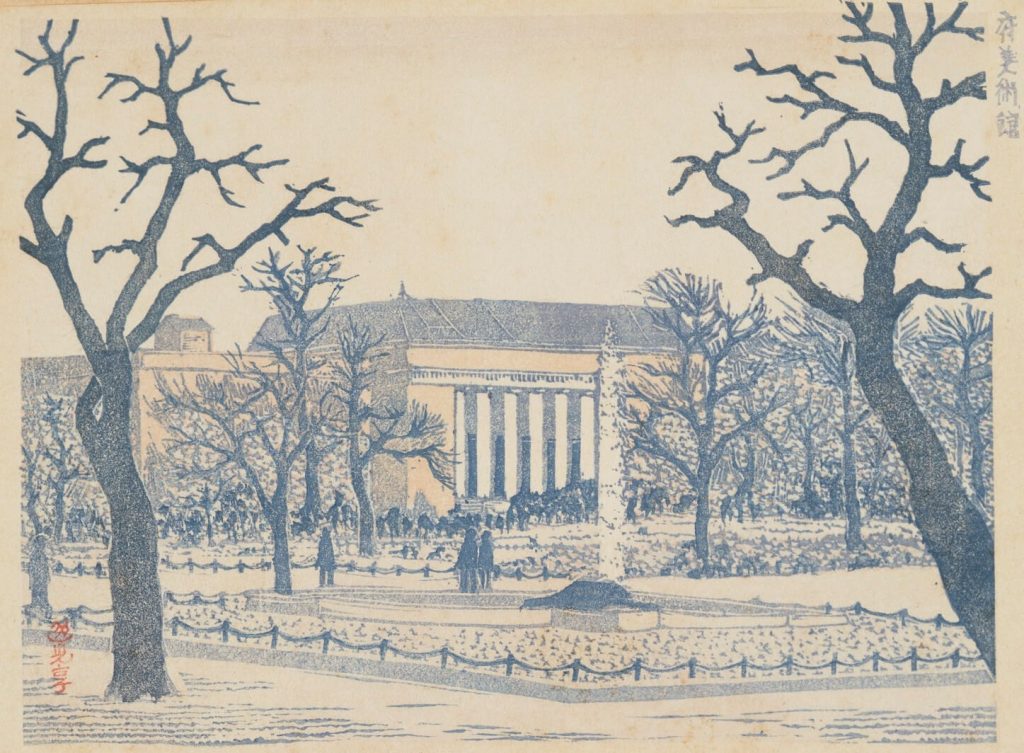 A Hundred Views of New Tokyo is a series of 100 prints of Tokyo created by eight sosaku hanga (literally, “creative print”) artists, including ONCHI Koshiro and HIRATSUKA Un’ichi. These artists aimed to “preserve present-day Tokyo for posterity” in the midst of the metropolis’ recovery from the Great Kanto Earthquake. The sosaku hanga movement, which flourished during the Taisho and Showa periods (1912-1989), advocated that woodblock prints should be “self-drawn, self-carved, and self-printed,” rather than created by dividing up the work among illustrators, engravers, and printers, as was the norm until the Edo period (1603-1868). 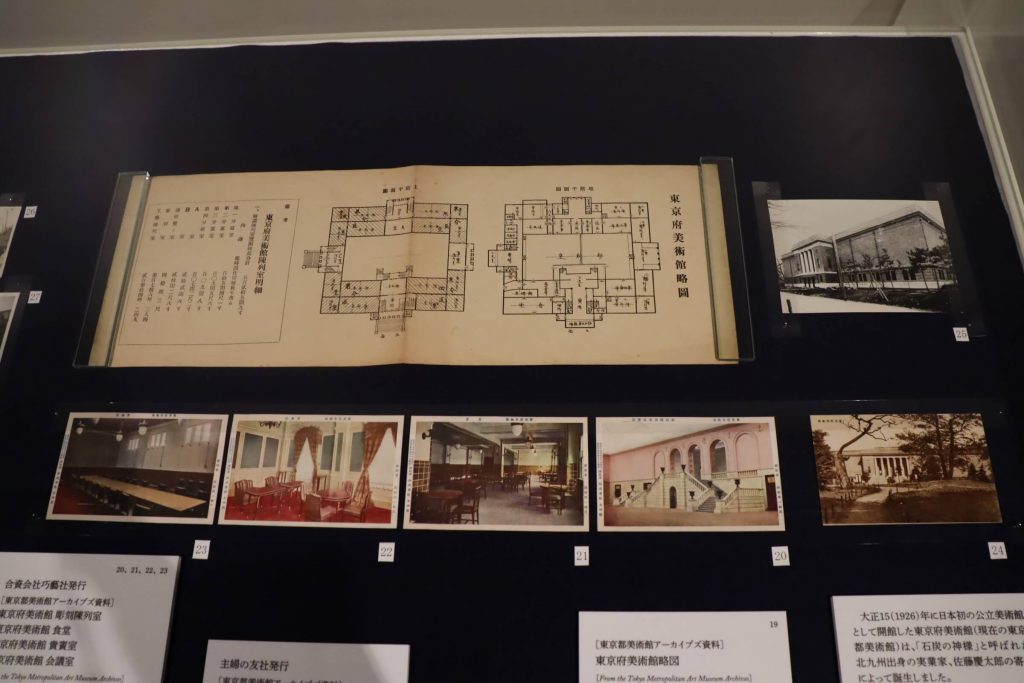 View of the exhibition: materials from the Tokyo Metropolitan Art Museum’s Archives.

In 1926, after Tokyo rebuilt itself, the Tokyo Prefectural Art Museum (present-day Tokyo Metropolitan Art Museum) became the first public art museum to open in Japan. This was made possible by a donation of one million yen (equivalent to 3.2 billion yen today) from SATO Keitaro, an industrialist hailing from Kitakyushu City, who was called the “God of Coal.” The original building was designed by OKADA Shinichiro in a modern interpretation of the classical style, with a central entrance fronted by a row of columns. Materials from the Tokyo Metropolitan Art Museum Archives show the museum’s appearance from around this time, and are also on display in the exhibition.

In 1975, the Tokyo Metropolitan Art Museum took on its current form with the construction of a new building designed by MAYEKAWA Kunio. The museum, which continues to serve as a venue for various art groups to showcase their works, will celebrate its 100th anniversary in 2026.

The War and Ueno 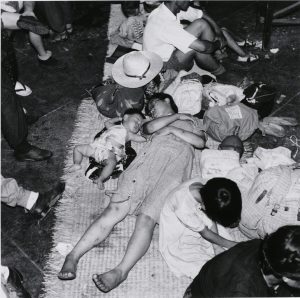 Ueno was not spared from the ravages of World War II. In the third section, “The War and Ueno,” we turn our gaze toward Ueno during and after the war, from the 1930s to the 1950s.

KUWABARA Kineo, a self-taught photographer who began his career before the war, left behind many snapshots of Ueno and Asakusa in the prewar period. He also visited Shitaya ward (present-day western Taito City) to capture portraits of the families of soldiers who had left for the war. It is believed that he printed two copies of these photographs, one which he sent to soldiers on the front line and the other to their families. 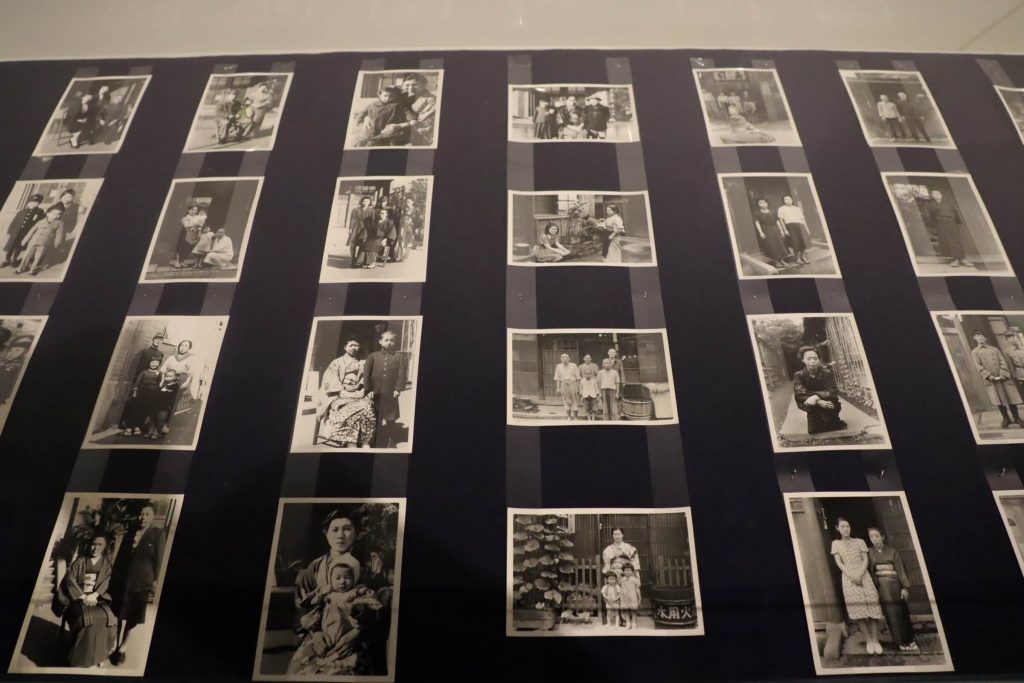 View of the exhibition: KUWABARA Kineo, Commemorative Photographs of the Families of Soldiers in Military Service, 1943,  Private collection.

After the war, orphaned children who had to live adrift on the streets appeared around Ueno Station and were photographed by HAYASHI Tadahiko, KIMURA Ihee, and others. Through these photographs by KUWABARA, HAYASHI, and KIMURA, news footage taken at the time, and sketches left by the artist SATO Teruo, this section of the exhibition offers an opportunity to rethink the relationship that Ueno had with the war. 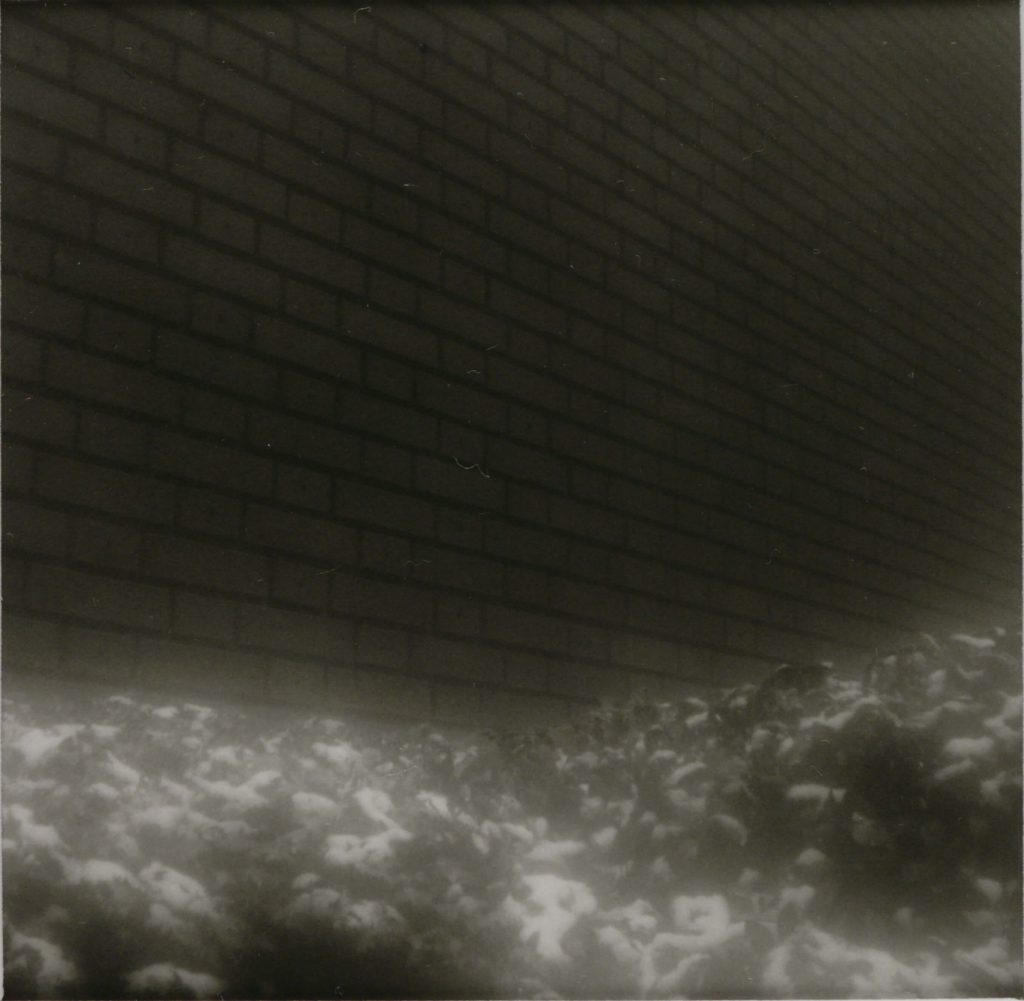 As a terminal station, Ueno attracts people from all regions of Japan. Riding the wave of high growth following the war, it developed into a bustling district traversed by a constant stream of people. Following the Tokyo Metropolitan Art Museum, facilities such as the National Museum of Western Art, the Tokyo Bunka Kaikan, and the Ueno Royal Museum opened, and Ueno came to be regarded as a cultural center of sorts.

The final section, titled “After the 1950s,” traces Ueno’s growth through photographs and materials that paint a picture of the district and its people from the 1960s to 1980s. NAITO Masatoshi, an artist highlighted in this section, uses monochrome photography to portray the many faces of Ueno. Women waiting on the train platform, drifters enjoying the cherry blossoms, and other scenes captured by the artist show the district in all its vitality and reveal glimpses of its shadows. There is also a special display of YONEDA Tomoko’s photographic works on the subject of prewar and wartime intelligence activities. Her works offer a fresh take on the vanishing memories of “the War and Ueno.”

Ueno has undergone tremendous changes in the past 160 years. Becoming familiar with Ueno’s history through this exhibition will make a stroll in the park even more enjoyable upon leaving the museum.

*Please note that the works featured in ToMuCo’s special issue on Ueno Park differ from those on display at the Tokyo Metropolitan Art Museum. 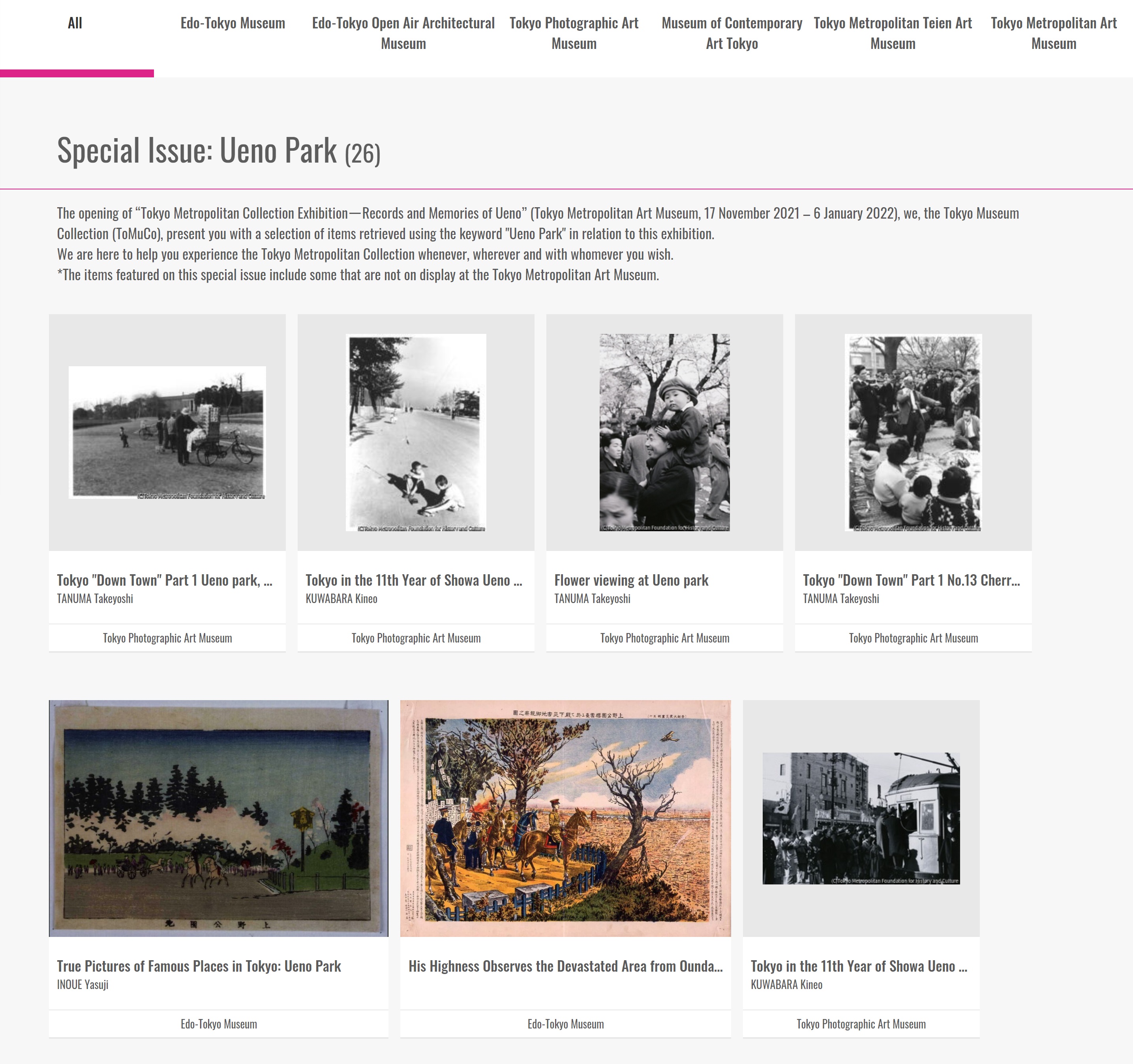 Tokyo Museum Collection is part of the Tokyo Smart Culture Project, which aims to provide infrastructure for the enjoyment of arts and culture by “anyone, anytime, and anywhere.” Going forward, the project will continue to work on digitizing approximately 400,000 items in the collections of metropolitan cultural facilities and prepare for their virtual unveiling to the public.

We hope you will enjoy this hybrid experience that allows you to access the Tokyo Metropolitan Collection both in person at cultural facilities as well as online through the Tokyo Museum Collection.