The Yebisu International Festival for Art & Alternative Visions 2021 (Feb. 5–Feb. 21, 2021) was affected by the new coronavirus infection from the preparation stage until the end. We asked the artistic director, Keiko Okamura, about this year’s festival, whose contents inevitably became unique to the particular circumstance. 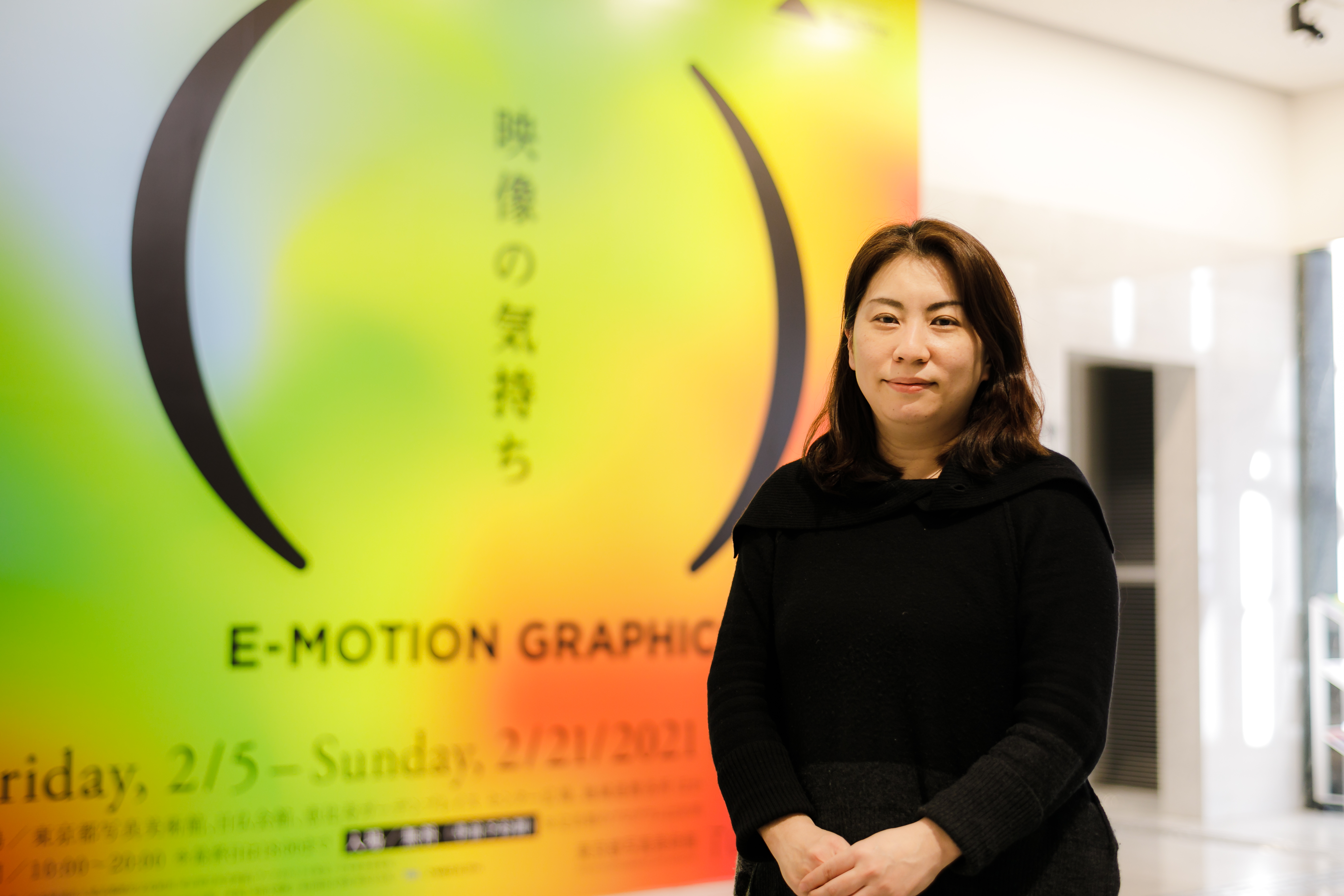 The theme revisiting the big question

For this year’s Yebisu International Festival for Art & Alternative Visions (Yebizo), all the exhibitions were held on a reservation-only basis, and the talks were streamed online. “The festival is held in February every year, and as soon as it ends, we start the planning for the next year,” says Keiko Okamura, the curator. “We finished the last event in February 2020, which was around the same time as the spread of the novel coronavirus infection began to intensify in Japan. Yebizo’s themes can be abstract at times, but considering the rapidly-changing situation, we felt that it was virtually impossible to select a radical theme that ingeniously reflected the era and, even if we did, it would not resonate with the audience.” In such context, Okamura revisited a question rooted in Yebizo: “What is imaging?” They decided that the upcoming festival for art and alternative visions would be an event to reconsider “imaging” and “videos,” which had become much more diverse and ubiquitous than they had been at the time of the festival’s inauguration.

From the outset of the planning, they expected that the contents must work without overseas artists traveling to Japan. “Nevertheless, it is an international exhibition and cannot consist only of Japanese artists. What we decided to do was to present historic works including those by deceased overseas artists alongside the works by contemporary artists.” 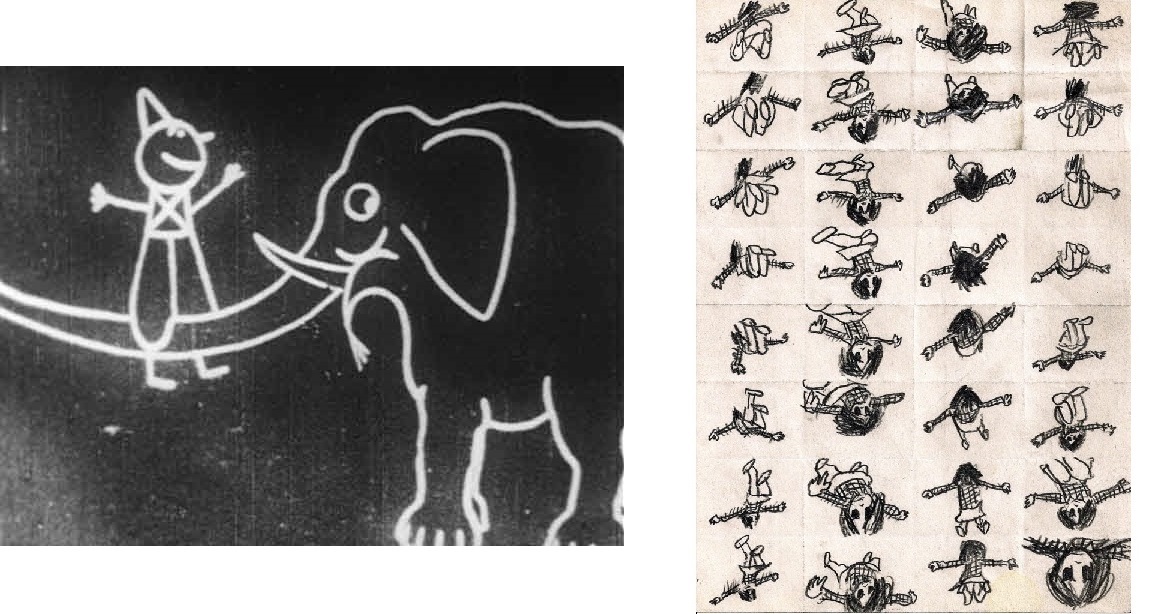 Okamura says that they considered utilizing some of the core items from the collection of the Tokyo Photographic Art Museum, the festival’s main venue, which included video devices that traced the history of motion picture technology, and pioneering video works. “For example, Fantasmagorie by Émile Cohl, created in 1908, can be called the origin of cartoon animation. Although over 100 years old, the work is full of languages of expression unique to animation, which can be found in today’s animation works and commercial animation. In this exhibition, the masterpiece from the video collection was juxtaposed with Climbing Universe, a mixed-media installation that included hand-drawn, stop-motion animation by contemporary artist Chikara Matsumoto. By seeing the works in sequence, I think the viewers could realize that the principles that have existed since the beginning of motion picture technology are still being used today, and that new works, created every day, are based on this history.” “Also, the ‘rotoscope’ technique, which is used by up-and-coming animation artist ShiShi Yamazaki  to move a projected character of herself, traces a person’s movements directly onto a two-dimensional character. The technique was patented by the inventor Max Fleischer in 1917. In an animation Fleischer produced in 1933, Betty Boop in Snow-White, the characters move smoothly thanks to rotoscoping. These works are presented in the same exhibition room.” 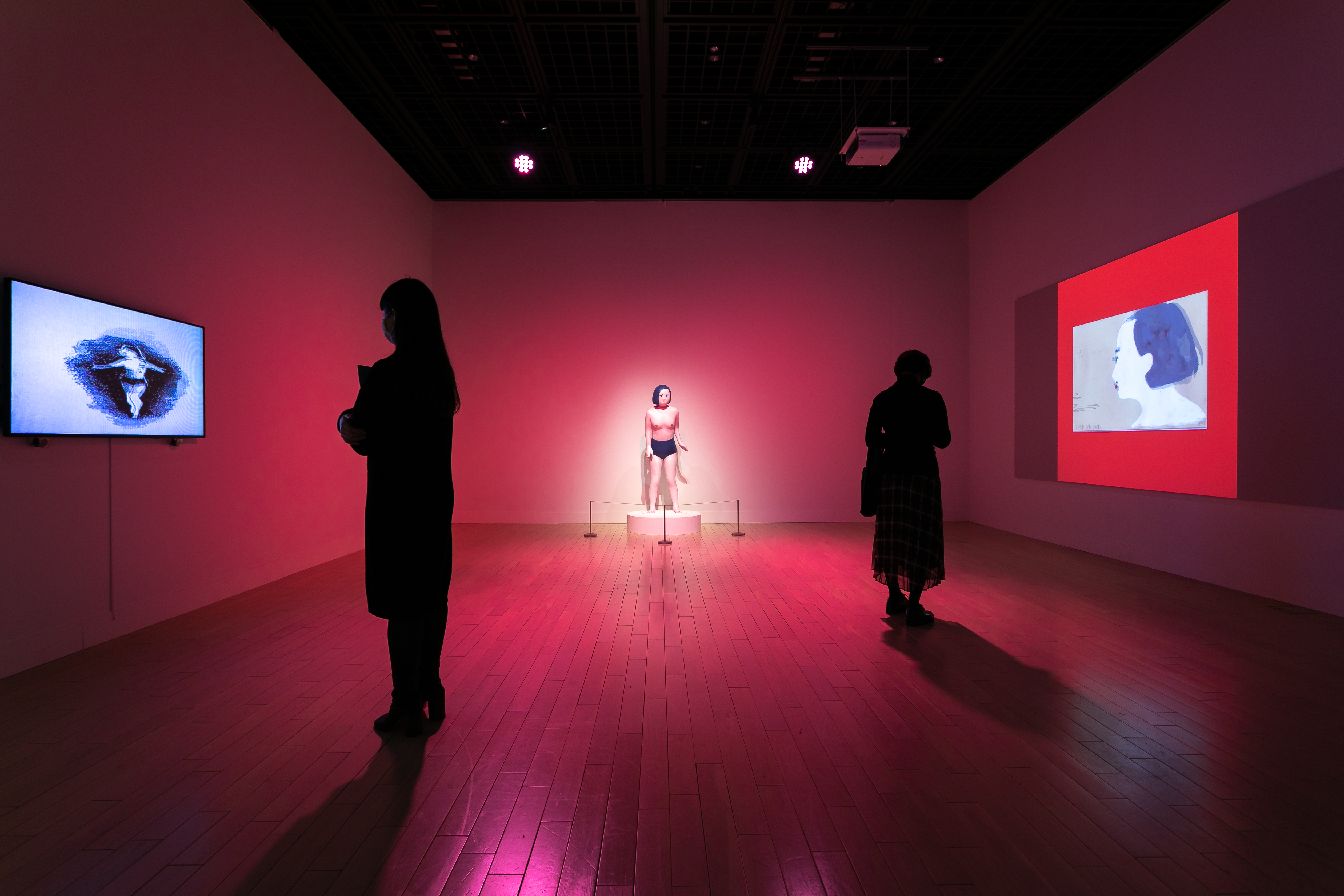 In terms of utilizing the works in the collection, some works that were acquired when they were exhibited in the earlier festivals were re-exhibited. These include works by Chikara Matsumoto, mentioned earlier, and a logotype work, So, So Soulful, by Young-Hae Chang Heavy Industries . “We are pleased to show these works at our museum. The number of video exhibitions is limited, so we have only so many opportunities to exhibit the works,” says Okamura. 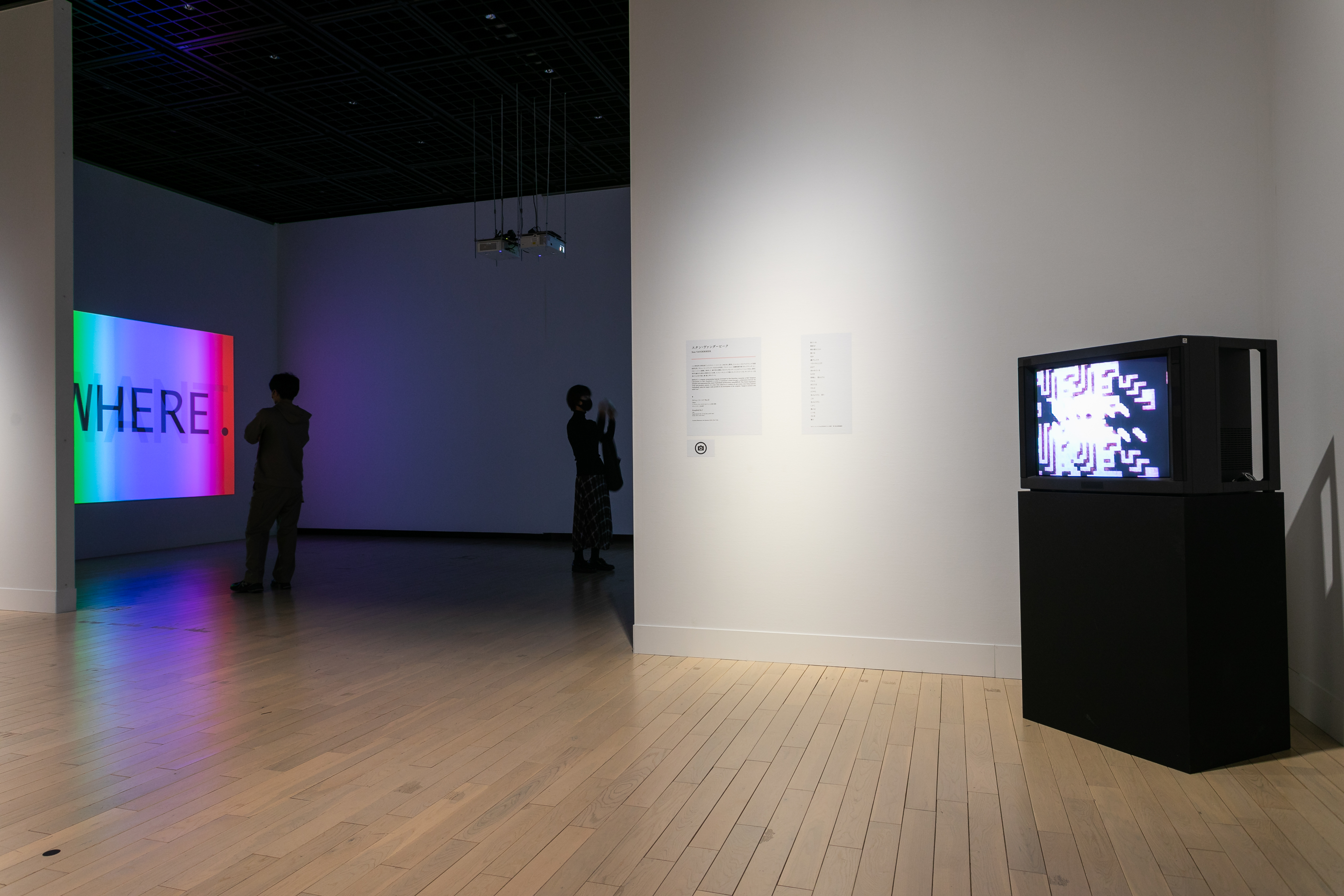 Toward the back: In So, So Soulful by Young-Hae Chang Heavy Industries, the logotypes make rhythmical movements (the English version is a collection of the artist), 2006. In the front: Poemfield No. 2  by Stan VanDerBeek  also uses texts, 1966.

Discovering artworks and artists during the coronavirus pandemic

Although the festival could not invite overseas artists, some of them were able to exhibit their works thanks to online communication. “Since it was difficult for any of the staff, including myself, to visit the sites physically to conduct research, we gathered information on new artists and artworks by researching online and reaching out to institutions and experts who had detailed information,” says Okamura. She also noted that she was able to gain new experiences through this hardship. “Keiken, a three-person unit with four works presented in the basement exhibition room, is a collective based in Germany and the UK. I initially approached them through a social network after getting some information on the Internet. I’ve never met them in person, but they are indeed artists who make full use of VR and AR. When I sent them drawings of the venue, they sent me back 3DCG images of the exhibition room with their works on display. Our exchanges were conducted remotely, but they were real.”

Okamura also said that the coronavirus pandemic had changed the way institutions, such as film archives, handle works in the collection. “There was already a trend to digitize film works before, but the number of archives and artists who decided to present their previously inaccessible works online have increased. Of course, borrowing and exhibiting works requires a lot of formalities. Still, we were able to show early computer animation works by James Whitney and John Whitney in crisp, high-quality, digitally remastered versions that even I had never seen before. We were also able to include the early motion graphics by artists such as Oskar Fischinger in the screening program. All these were possible because of the changes caused by the pandemic.” 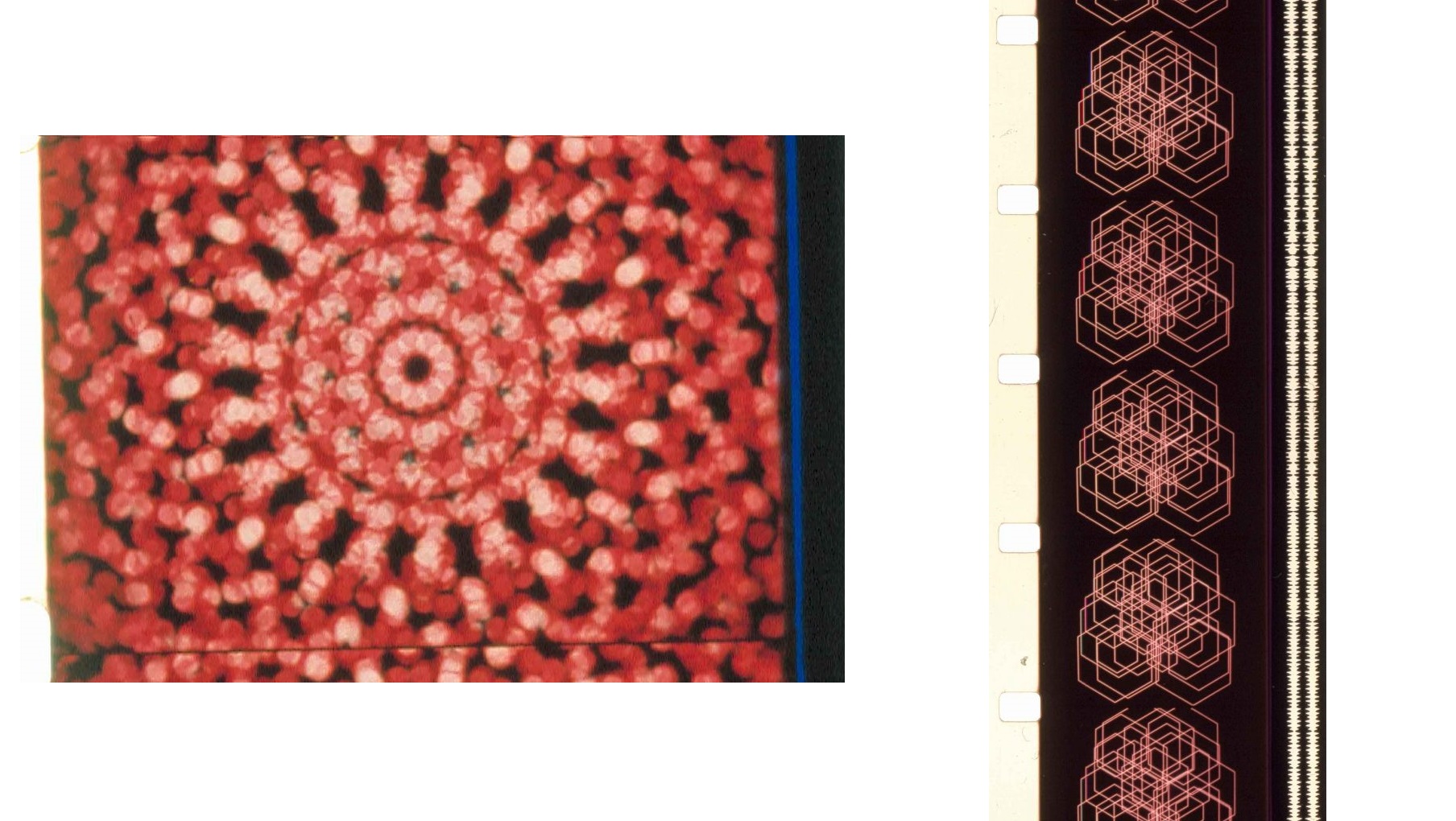 We asked Okamura about the off-site exhibition, which unfortunately was canceled this year. “The large-scale, outdoor installation by WOW, which was the only commissioned work we were preparing, had to be canceled due to the declaration of a state of emergency. It was such a pity, as the artist had spent a long time constructing the work to fit the theme and the venue of the exhibition.” On the brighter side, there was a case where Yebizo became a place for salvation. “Go Watanabe’s work, the towers (lights are books) , was originally presented in another exhibition that was suspended after a week of its opening due to the declaration of a state of emergency in April last year. The artist reconfigured the work, and we were able to present it at the Maison franco-japonaise. I hope that the works that had to be given up this year will have another chance to be shown in one form or the other.” 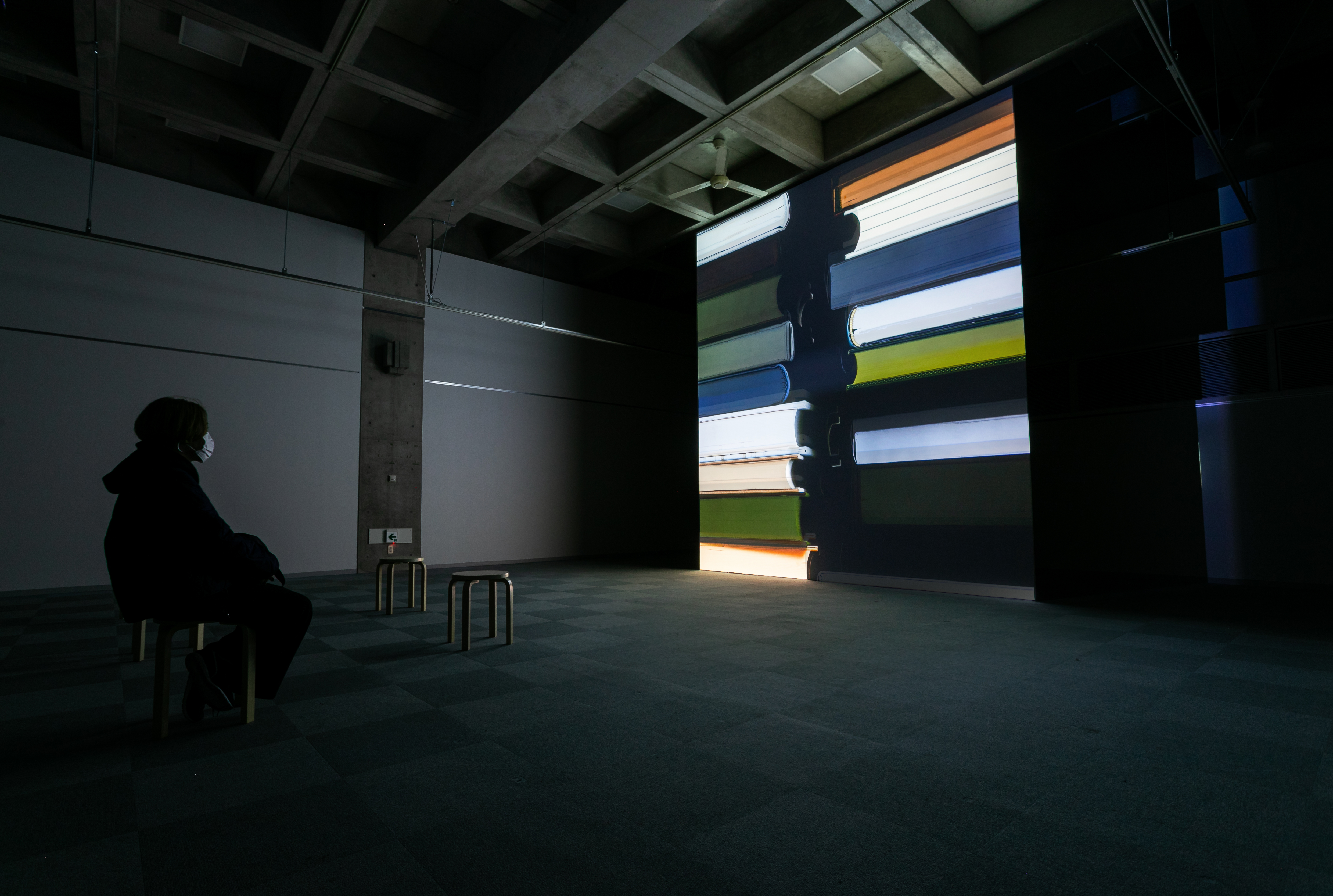 There are innumerable contents and programs of “imaging” and “videos,” and even snippets of daily life are uploaded onto social networking sites. Their amount has been further increasing following the pandemic. How are we experiencing them? We may miss out on something if we consume them passively. “Images are nothing more than a collection of flickering lights. And yet, we feel all kinds of emotions from these flickers. Why is that? If we could present the technology and history behind video works in an easy-to-understand way as a hint to imagine the mechanism that makes us feel shaken or excited, then, not only this exhibition but also the images and videos we see everyday could become a treasure trove. I had such thoughts in mind when selecting and arranging the works for this year’s festival,” says Okamura.

Imaging and videos as tools and contents have become familiar and easy to use for all of us. If we could make sense of a fresh sense of wonder that they give us, and our emotions that arise from it, our current state, in which even everyday communication has taken the form of video, could be further enriched. This year’s Yebisu International Festival for Art & Alternative Visions, entitled “E-MOTION GRAPHICS,” was not focused on novelty. Instead, it reminded us how to enjoy “images” and “videos” that were already abundant around us.

Photos of the exhibition: Yuta Hinohara