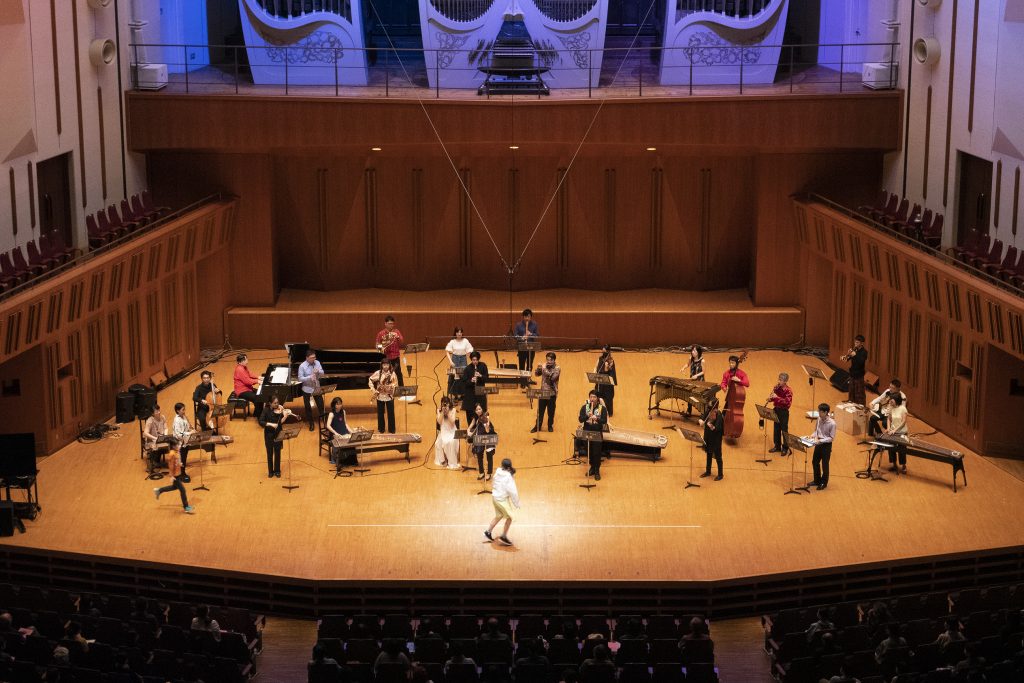 Performance of “Mirai — Oite Wa Ko Ni Shitagae — version” [Future — be guided by your children when you are old — version] (composed by Yoshihide Otomo).

The “Born Creative” Festival 2020, with composer Dai Fujikura as the artistic director, is an all-day event for experiencing the birth of newly-created sounds. For 2020, the event was held at the Tokyo Metropolitan Theatre on Saturday, September 26, with artists in Japan who were recognized for their radical activities.

The second volume of the article series introduces the process toward the hosting of the Special Concert and the performance on the day, the Born Creative Festival for Grown-Ups! held in the evening at the same venue, along with the comments by Dai Fujikura from an interview conducted at a later date.

An experimental place for artists to pour out their enthusiasm

The main event of the festival, the Special Concert, was held in the concert hall at two o’clock in the afternoon.

It was an extraordinary program consisting of a total of 17 artist groups performing together, with many of the songs presented for the first time in Japan or in the world. 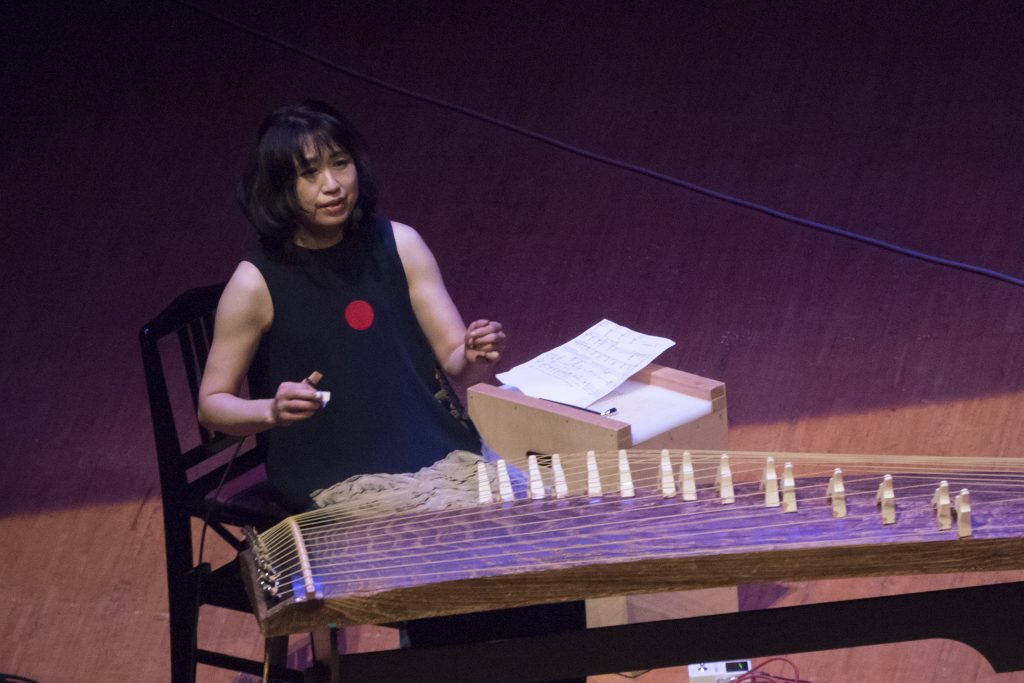 Michiyo Yagi playing her “Suisho No Yume” [the crystal’s dream]. An intense sound of koto and a relaxed and warm singing voice depicted the sorrow and fortitude of Lady Shizuka.

At the “Born Creative” Festival, Mr. Fujikura invites the artists based on his interest, but the participating artists are entrusted to choose the format and songs for their performance. Norio Sato of Ensemble NOMAD was one of such artists who often added performers or decided on the appearances without Mr. Fujikura’s knowledge.

Yoshihide Otomo, who has participated in the festival since the first year, was originally expected to provide his existing music for the 2020 event. Instead, he offered to create a new piece and participate in a performance, and on the day of the event, decided to perform in another program.

“I receive passionate messages from the performers after the event. They talk about what they want to do if they could participate again next year.”

The number of requests Mr. Fujikura receives from artists who want to perform in the “Born Creative” Festival has been growing year by year. The event has an extraordinary appeal to performers, making them want to participate and try something new. 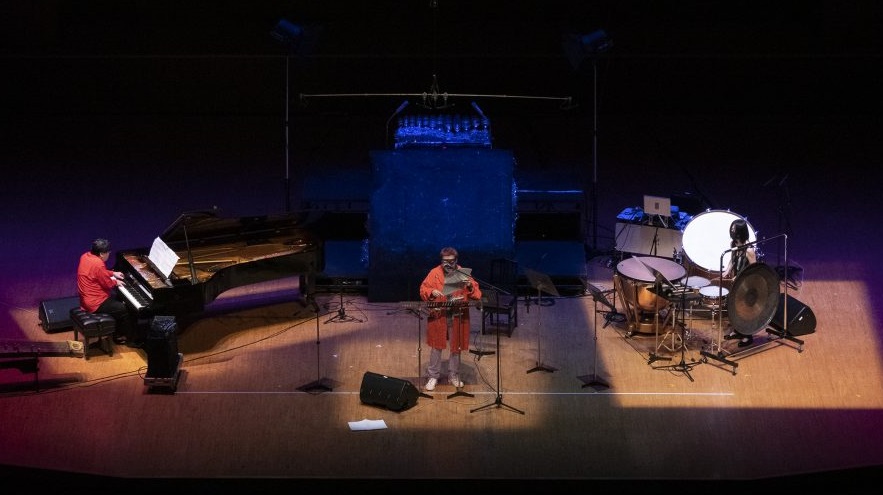 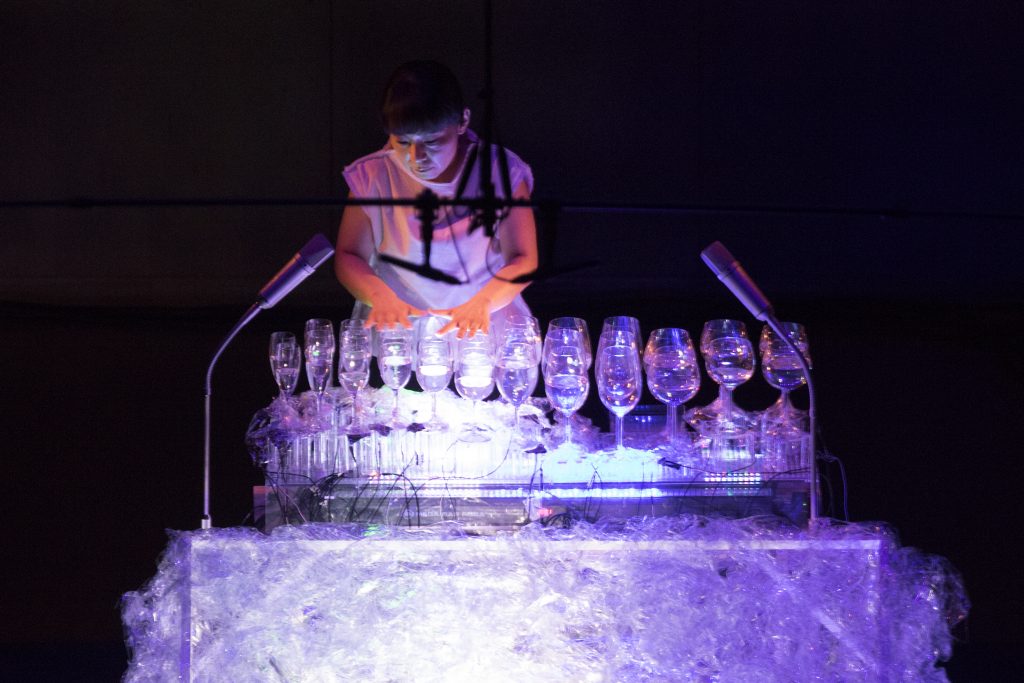 “between water and ray — for glass harp and live electronics,” a memorial performance for Ai Kamachi who passed away in May 2020 (composed by Ai Kamachi & Tatsuo Nagami [Nagie]). The glass harp, played rhythmically by Rina Okubo, prompted the base to light up with the music.

Yoshihide Otomo composed a new song for the “Born Creative” Festival 2020, “Mirai — Oite Wa Ko Ni Shitagae — version” to be performed for the first time in the world.

On the stage, orchestra and gagaku performers were conducted by thirteen NOMAD kids. The children, appearing one or two at a time, jumped, squatted, waved their arms and legs, stepped, and disappeared into the wing. The grown-up performers played their instruments following the children’s moves.

In the end, all the children gathered on stage and called for Mr. Otomo in the audience. He stood up from his seat in the middle of the first-level seating area and bowed. The audience responded with applause. 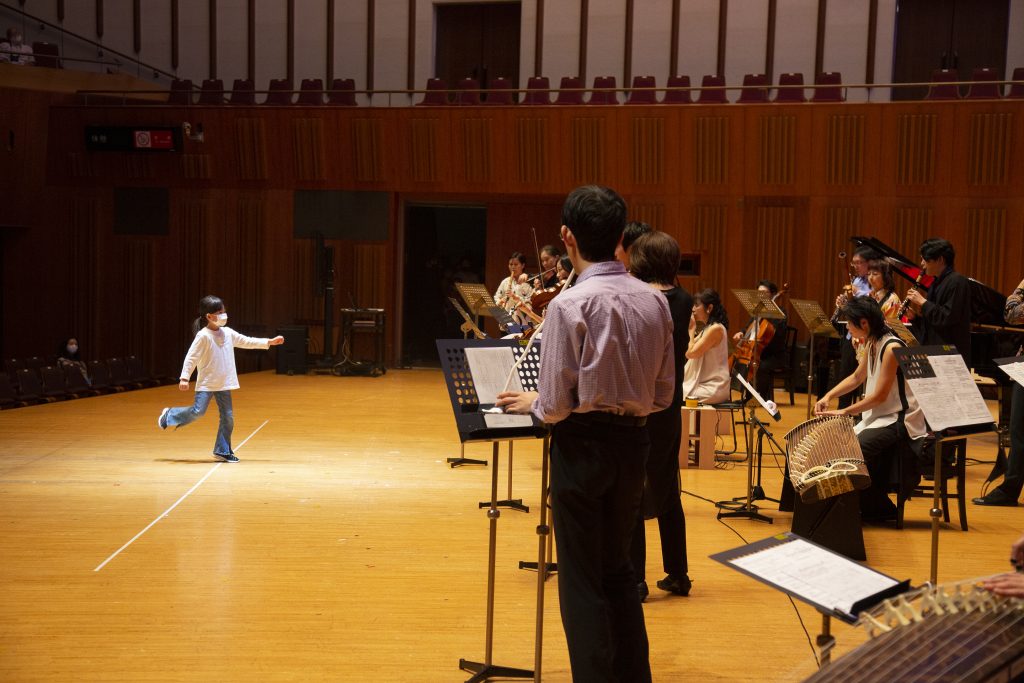 The artists played their instruments following the movements of NOMAD kids. 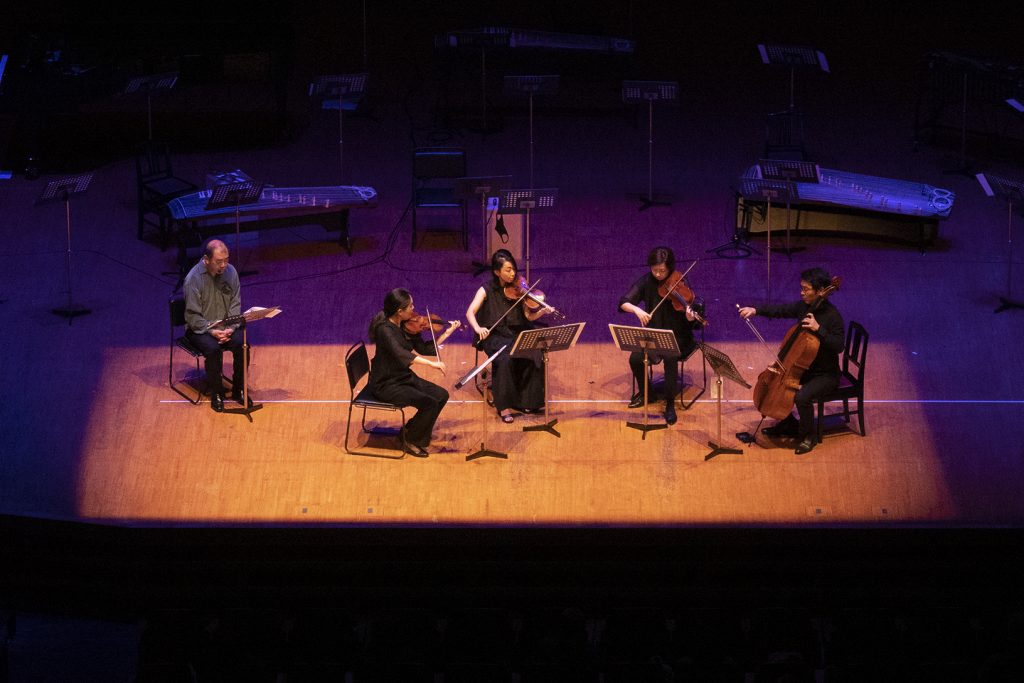 An English recitation piece based on a diary by an Arab, “Passage” (composed by Ryuichi Sakamoto), was performed for the first time in Japan. For the Japanese version, it was a world premiere. Norio Sato of Ensemble NOMAD exhaled deeply and expressed the words.

As a director, artist, and challenger

The last song of the Special Concert was “Longing from afar (liver version)” composed by Dai Fujikura. The piece was originally created to be played online and make beautiful music even if the notes were out of harmony, as musicians were not able to gather amid the new coronavirus pandemic. It was the first time in the world to perform the song on stage.

Two weeks before the festival, Mr. Fujikura heard about “music mode” on Zoom, the online video conferencing system, which allowed telecommunication with better sound quality. He reached out to Tonmeister Koichi Ishimaru right away to discuss his idea about joining the performance online using this new feature.

The test runs conducted between Mr. Fujikura’s and Mr. Ishimaru’s houses went well, but to use it in the 2000-seat hall required equipment suitable for the size of the space. Mr. Fujikura experimented night after night with Mr. Ishimaru who knew every corner of the hall and, in the end, succeeded to output the sound with the same quality in the hall. Thanks to a series of adjustments made until the very last minute, the performance was successful with many “first-times,” including Mr. Fujikura joining remotely from London, which was the first attempt in the world. 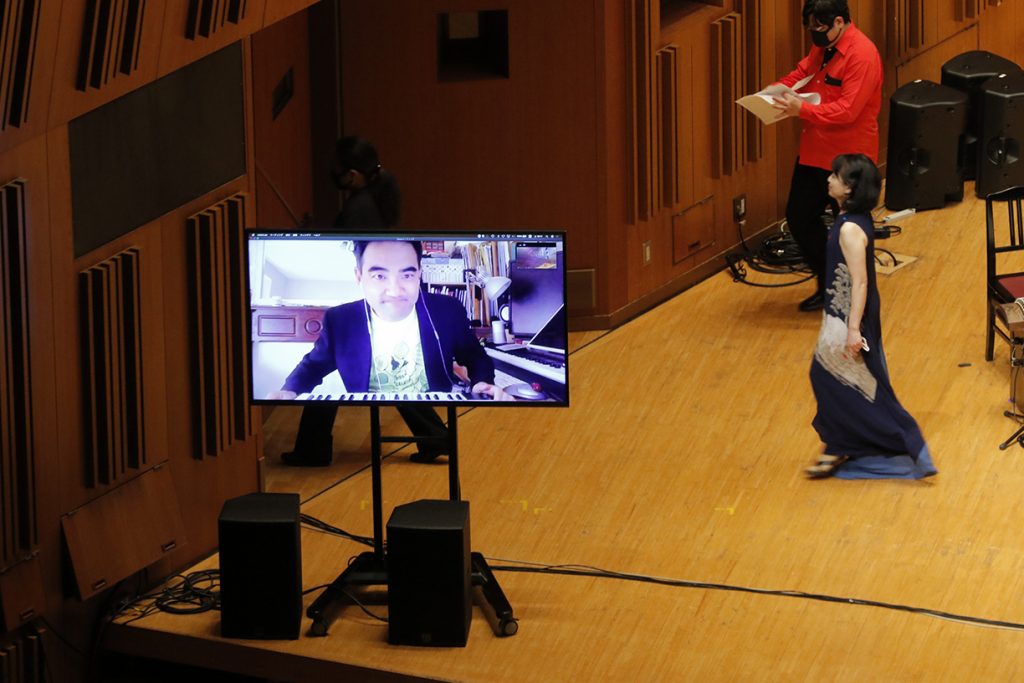 Mr. Fujikura performed his part while listening to the sound of the video conference with his right ear and a live report by Mr. Ishimaru sitting in the audience with his left ear.

The performance started with the wind players who entered from both sides of the stage playing their instruments, followed by string instruments, gagaku instruments, piano, percussion instruments, and NOMAD kids who played the bells, and finally Mr. Fujikura on the piano.

The performers who had been playing different melodies began to play the same tune which turned into rich harmony that filled the entire hall. The unified sound repeatedly trembled and stopped before the performance came to an end.

(The video of the “Longing from afar” performance is available.) 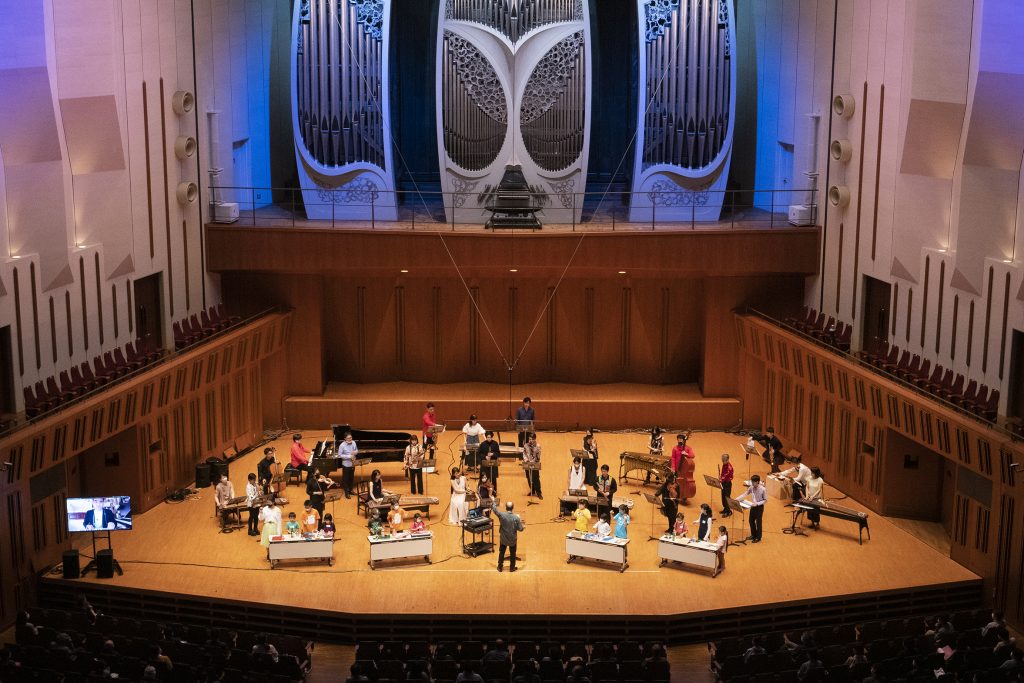 The sounds of wind and string instruments, gagaku instruments, bells, rubbing paper, and voices of children were all layered together like musical instruments.

Finally, in the same hall as the Special Concert, the last event of the festival, the Born Creative Festival for Grown-Ups!, was held. The event, which was open to those holding the ticket for the Special Concert, had no performer, and the audience was free to enter and leave at any time. From the start until the end of the performance, between seven and nine o’clock in the evening, the audience spent a relaxing time listening to electronic music. The sound created by Nagie was so realistic that you could feel the vibrations of the sound right next to your ears.

And, this was the end of the “Born Creative” Festival 2020, a festival that offered the audience an opportunity to come in contact with the newly-created sounds and music by Japanese artists that go beyond the cutting-edge. 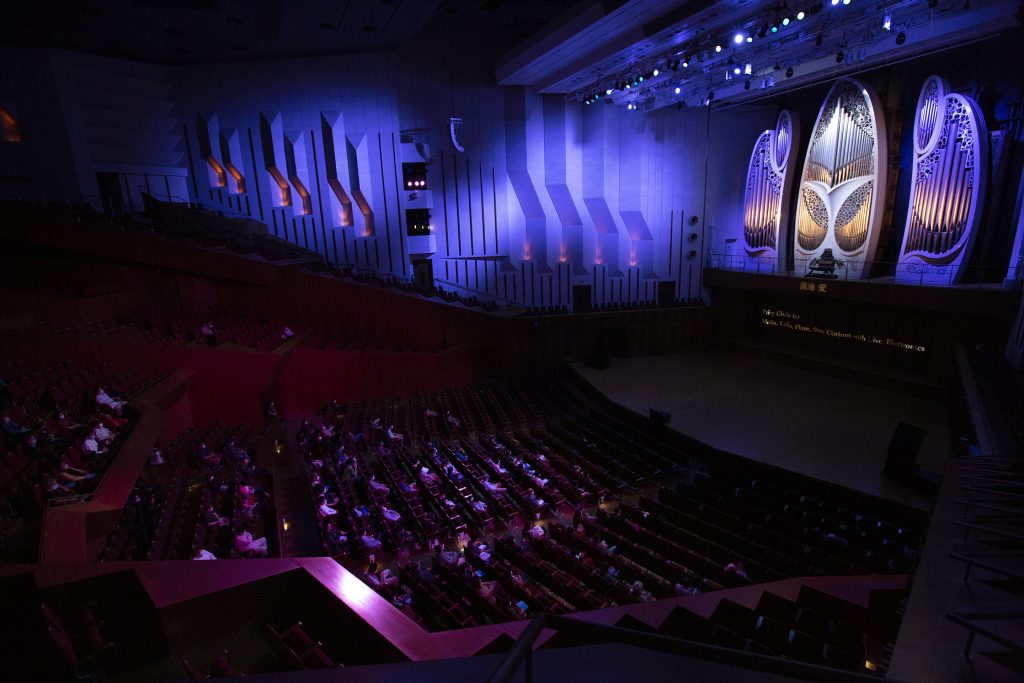 The lighting in the hall changed with the melody, allowing the audience to immerse themselves in the atmosphere of the music (lighting design by Keisuke Niijima).

For the “Born Creative” Festival, which celebrated its fourth year, the 2020 event was the first year that Mr. Fujikura did not travel to Japan. There was no operational concern as he fully trusted the Tokyo Metropolitan Theatre. Also, having done many commissions away from home since he was young, he was accustomed to online meetings and rehearsals.

To try something new, he used the web conferencing system on the staff’s smartphone to walk around the theatre and watch the festival remotely. Instead of live-streaming from each venue, he moved around and engaged with the performers and the audience. By doing so, he said, the event felt more real, as if he was actually present in the room.

Mr. Fujikura said of the Tokyo Metropolitan Theatre: “You might have an impression that they are traditional and formal, but you’d be surprised to see how many of their staff members are a fan of experimental music like ‘Born Creative’ Festival.” In fact, the cooperation between the artistic director Mr. Fujikura, the performers, and the Tokyo Metropolitan Theatre that operates the event is what enables the “Born Creative” Festival to continually present the values of new music. 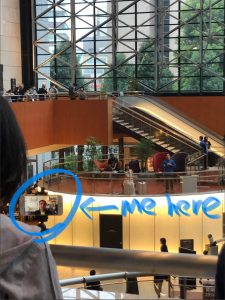 Mr. Fujikura walking around the venue remotely (image from his Twitter).

The Tokyo Metropolitan Theatre follows the guideline put forth by the Council for the Promotion of Classical Music Performance Management, The Association of Public Theaters and Halls in Japan, to take measures to prevent the infection of the new coronavirus.

According to Junko Suzuki, Director of Project Planning Division at Tokyo Metropolitan Theatre, who produced the “Born Creative” Festival, in order to decide whether or not to require facial masks on stage, she discussed with the performers to make sure that it did not interfere with the integrity of their music and performances. She said that, for future music productions and performances, she was eager “to advance the safety measures and plan events for children for 2021.”

Mr. Fujikura is also hopeful, stating that “I learned a great deal from the experience of hosting the event amid the pandemic. I believe we will see more improved ways of making music.”

In the future, I hope to continually witness the birth of innovative, mind-liberating sounds and the evolution in music creation, as we saw at the “Born Creative” Festival 2020.