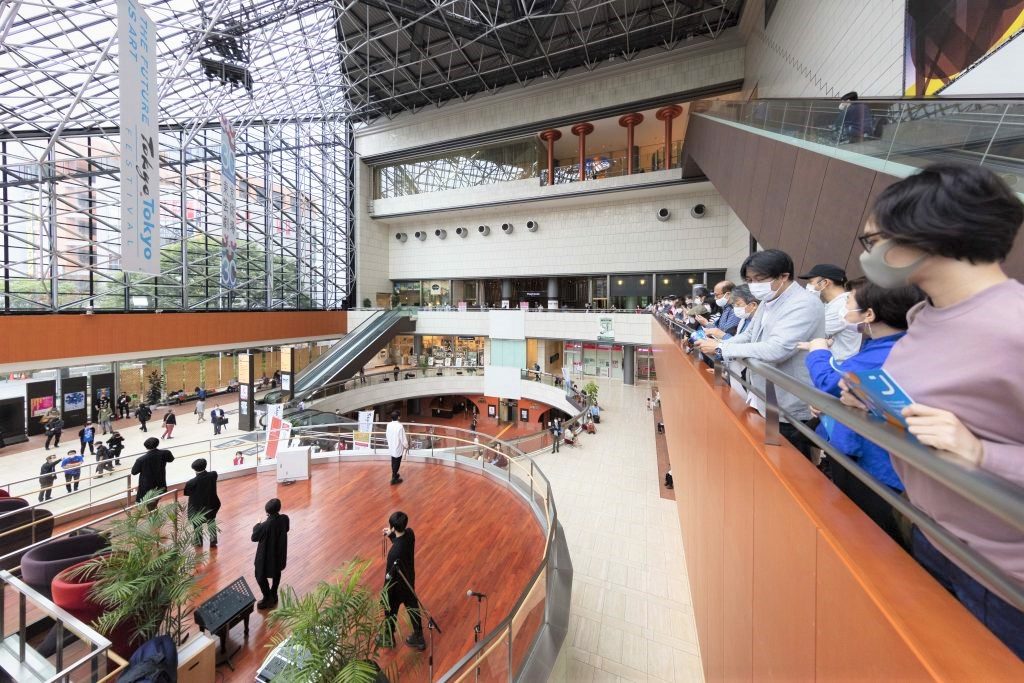 “Born Creative” Festival is an event that offers an opportunity for both children and grow-ups to encounter unique new sounds and enjoy a variety of music, from orchestral music and gagaku [Japanese ceremonial court music] to electronic music. The “Born Creative” Festival 2020 was held on Saturday, September 26,2020 at the Tokyo Metropolitan Theatre.

The following article, the first of the two-volume series, introduces the main programs of the day including the concerts and workshops.

The festival’s title, “Born Creative,” was coined by composer Dai Fujikura, who serves as the artistic director of the event, to express the idea that “all humans are born creative.” The event has been held every year since 2017 with artists from Japan and overseas, marking the fourth anniversary in 2020.

For the 2020 event, according to Mr. Fujikura, the projects of the overseas artists who were planning to travel to Japan were postponed at the end of June due to the spread of COVID-19 infection. He did not intend to cancel the event, however, and was perfectly confident that it would be successful without overseas artists. For Mr. Fujikura, who lives in London, Japan is an overseas country, and he felt that “when I am in Japan, I want to listen to and be inspired by Japanese music.”

Fortunately, the event had only one requirement, which was to create “new sounds that babies and grow-ups enjoy alike,” and, at the time, many of the plans were not yet confirmed, so it was possible to decide on the programs flexibly. 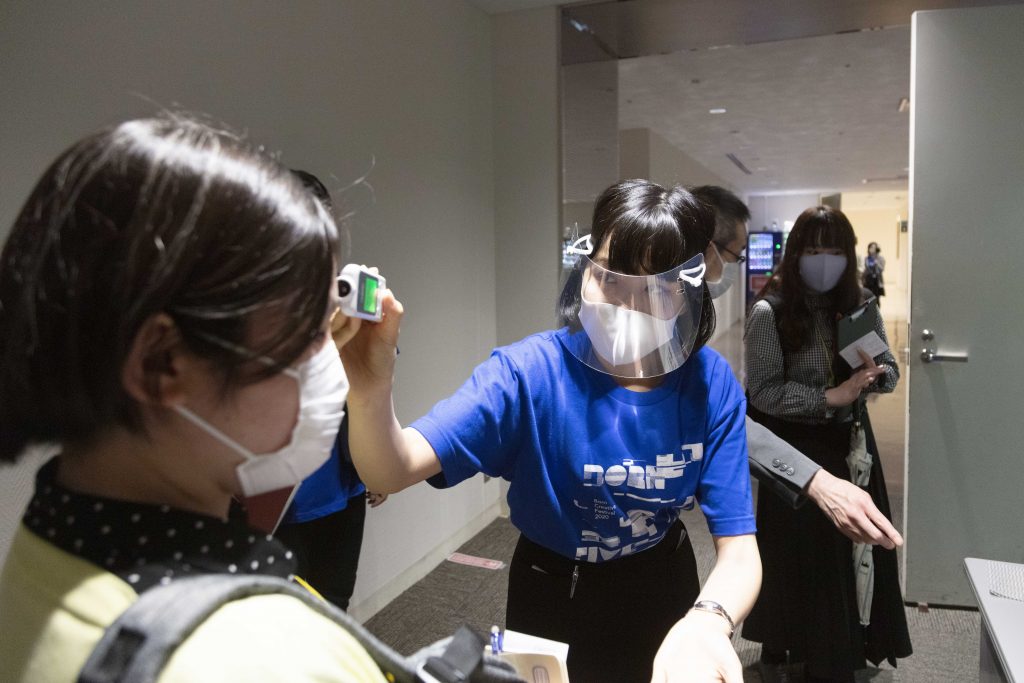 Participants and staff members wore masks and face guards. To enter the hall or room, the participants had to have their body temperature measured and their hands disinfected. 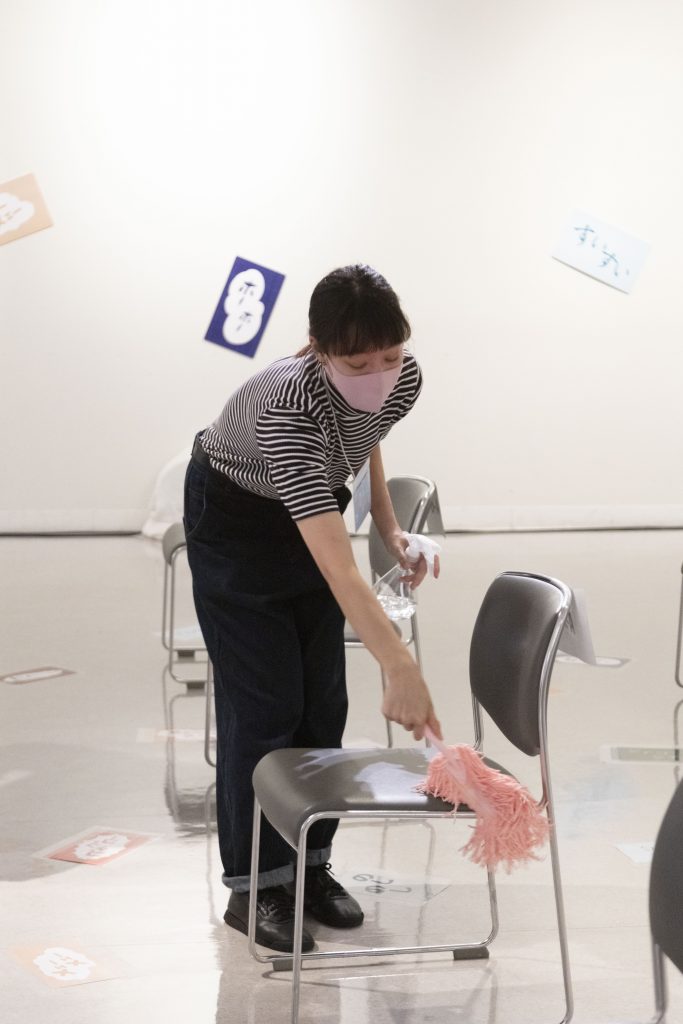 The team took thorough measures including disinfecting seats and other fixtures every time the participants entered/exited the rooms.

Various programs for everyone

The “Born Creative” Festival 2020 offered both free programs open to everyone and paid ones, with the Special Concert as the day’s highlight.

At 10:50 am, the “Born Creative” Festival 2020 began with the Atrium Concert (free of charge) held on a stage above the ground-floor box office, which handled general information and ticket sales.

Koto [Japanese zither] player Maya Kimura performed a song by Dai Fujikura title “Yuri — For 25-string Koto.” A 25-string koto is a new instrument developed in 1991 and has almost twice as many strings as a regular one. 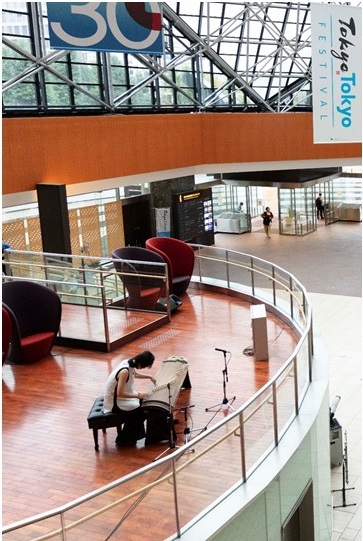 At one o’clock in the afternoon, shakuhachi [Japanese vertical bamboo flute] player Dozan Fujiwara and his shakuhachi ensemble Fuga Chikuin appeared from the second-floor passage, ringing the wind chimes. The deep and pleasant sound of their shakuhachi echoed throughout the atrium.

The “Born Creative” Festival has been inviting players of traditional Japanese music since the beginning, but the programs for 2020, in particular, included many unique artists in the field. It was possible thanks to the increasing number of requests from young players to perform at the festival and the expanding communication circle started by those who participated in the past “Born Creative” events. 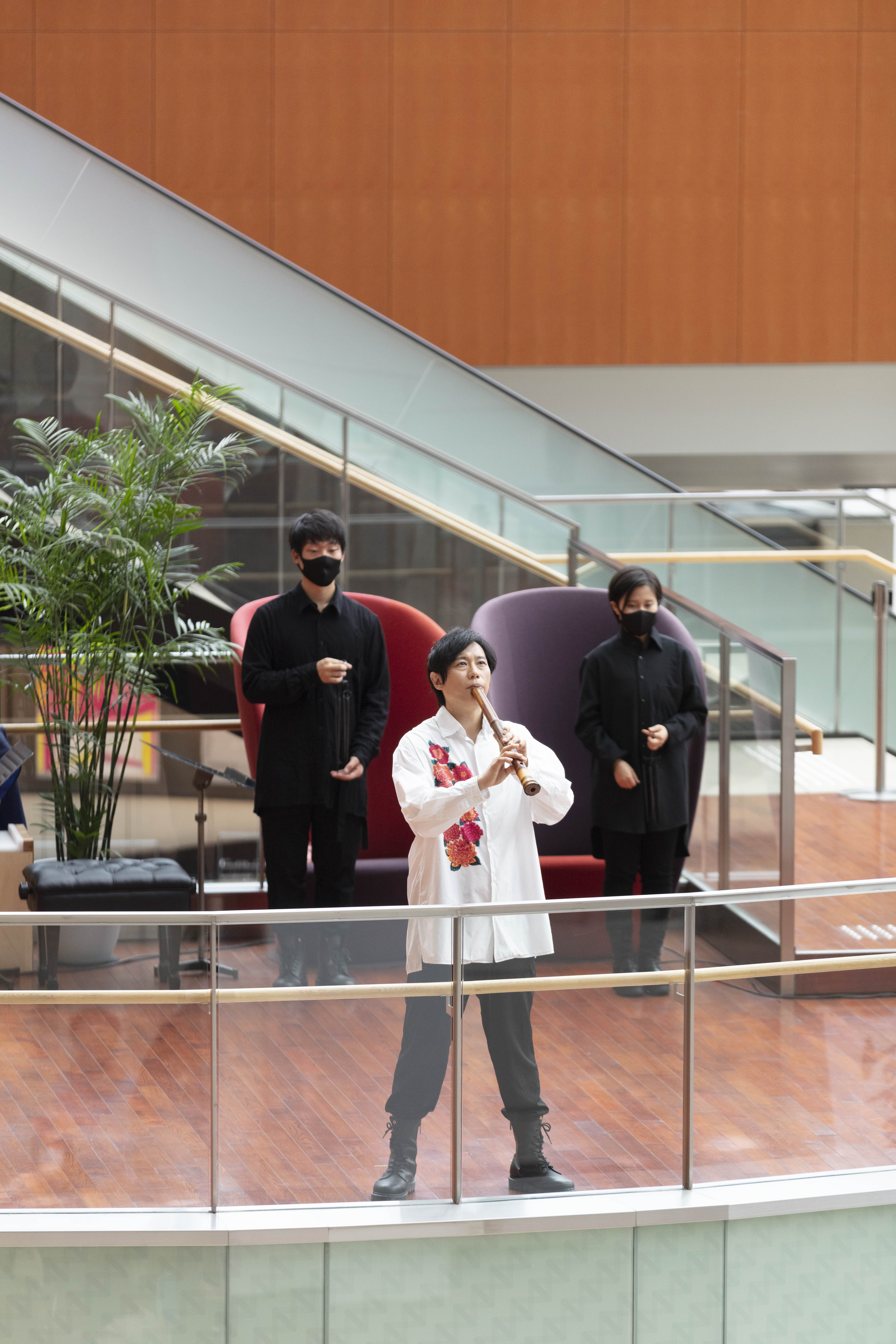 Entering the room, the participants saw on the wall and floor the stickers with animal sounds or onomatopeias, such as “mee-mee” [baa-baa] or “noshi-noshi” [sound of heavy strides]. The stickers were part of an app called “AR kono oto naani?” [what is this sound?]. Holding up a tablet toward an onomatopoeia, an animal that matched the sound popped up on the screen.

Tapping the keyboard of “daredemo piano” [universally accessible piano], an AI automatically would play an accompaniment. For the event, musical patterns composed by Mr. Fujikura were programmed so that anyone could play the contemporary-music version of “Twinkle Twinkle Little Star.” 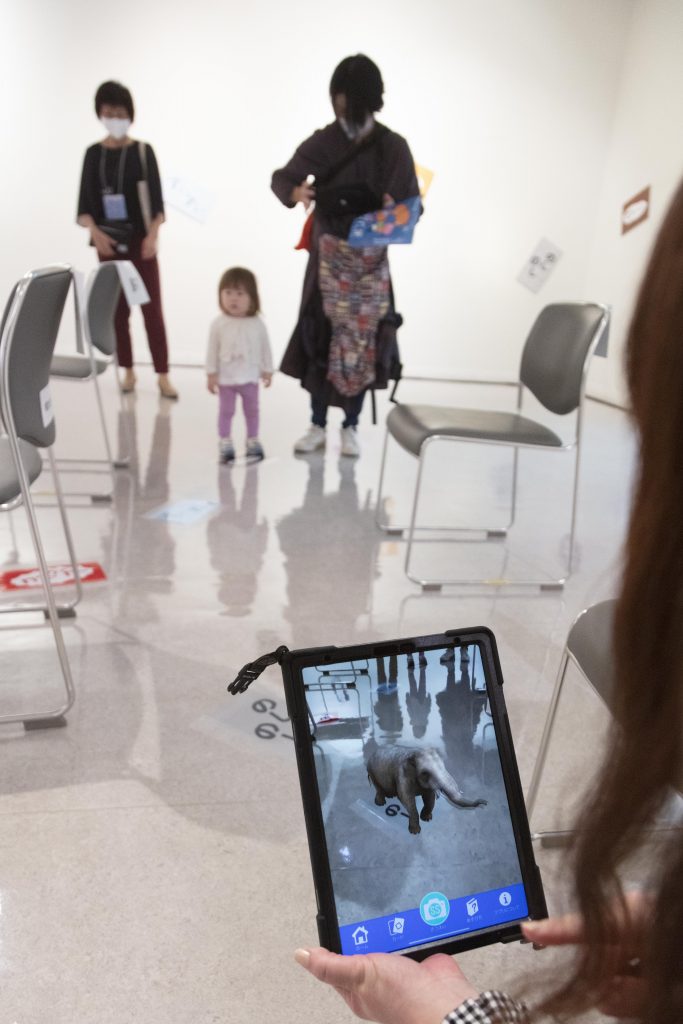 Holding up a tablet toward the sticker of “noshi-noshi,” an elephant appeared on the screen. 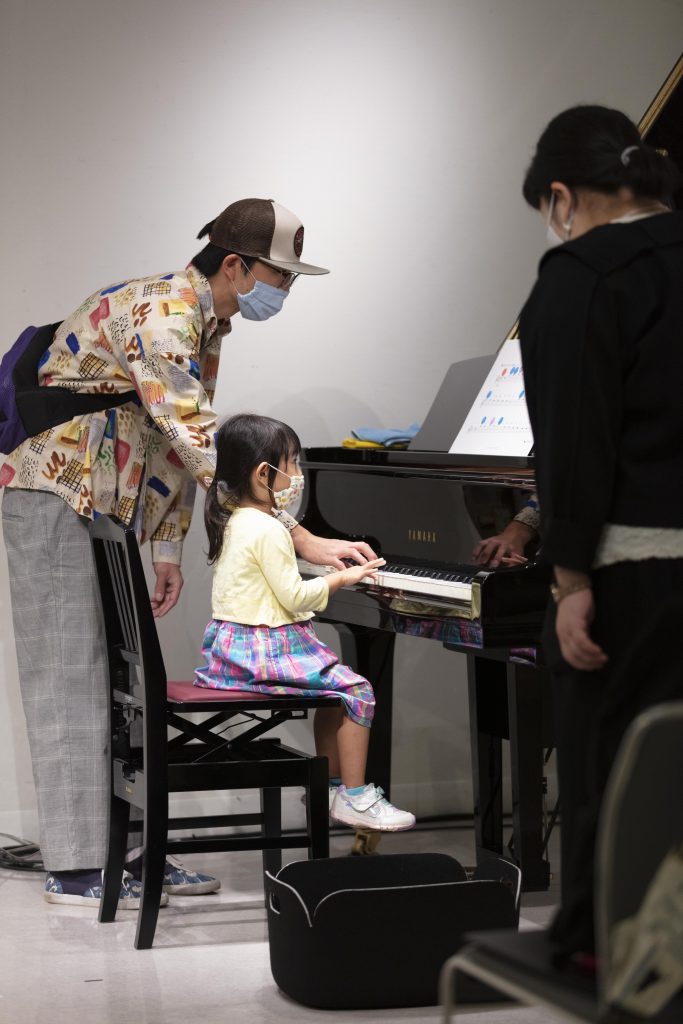 Both children and grow-up were absorbed in playing “daredemo piano.”

The workshop-and-concerts by artists, Tonmeister Ishimaru’s Room, Koto’s Room, Shakuhachi’s Room, and Ensemble NOMAD’s Room, were held as a paid program (500 yen) exclusively for the participants of the Special Concert. 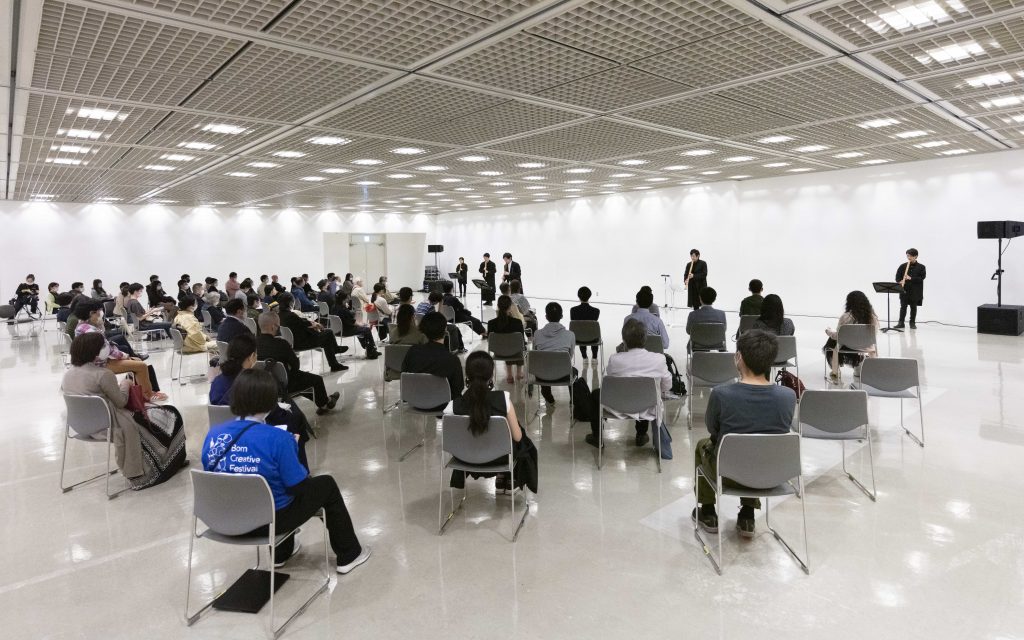 Workshop and concert Shakuhachi’s Room. The seats were arranged with sufficient spacing in between.

Tonmeister Ishimaru’s Room by Koichi Ishimaru, a staff member at the Tokyo Metropolitan Theatre who produces the sound for their theatre arts, took a style as a laboratory for creating various sound effects. The workshop’s theme was electronic music by German composer Karlheinz Stockhausen, which influenced the sound effect of animation works in Japan.

To recreate the electronic sound that Stockhausen used, Tonmeister Ishimaru brought in an electric measuring instrument used for building inspection and an open-reel tape recorder. The beeping sound of the electric measuring instrument was recorded with the tape recorder. Assistant Ai-chan (Megumi Sekine) then scratched the tape (turning it by hand), and the sound changed to “gugugu,” “guon,” and “kyururu.”

The participants were invited to try the tape scratching method, as well as the metal harmony ball and strumok, a Ukrainian musical instrument that makes the sound of water. The program ended with three of the participants performing improvisationally “Music of the Spheres.” 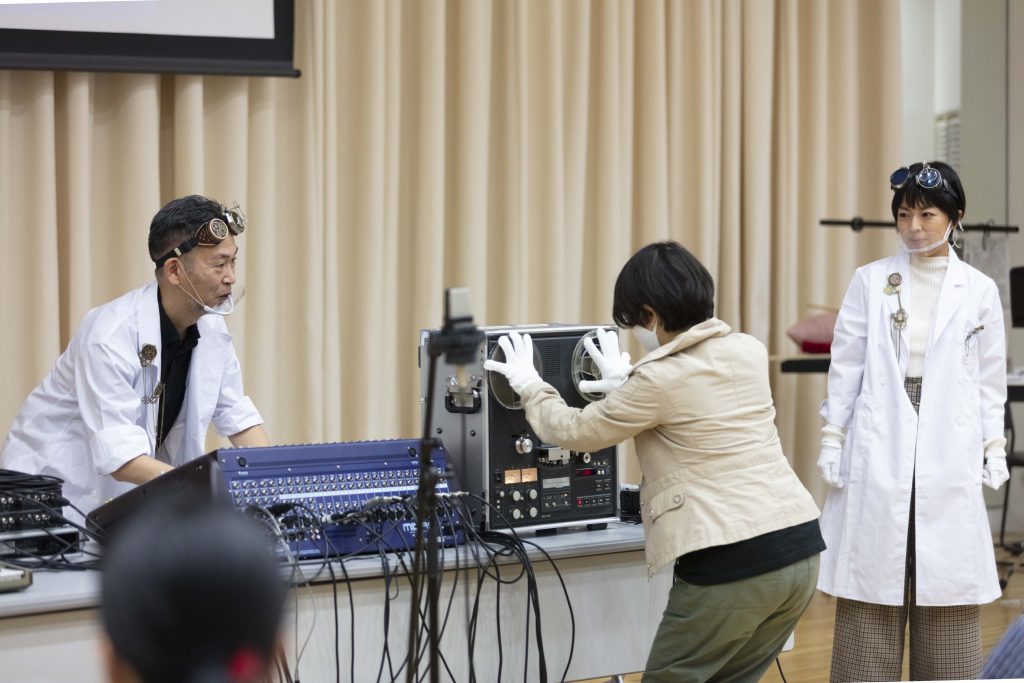 Ensemble NOMAD’s Room was a concert by Ensemble NOMAD known for their unconventional musical performances spanning across periods and genres.

“Schraubdichtung” [screw gasket] (composed by Carola Bauckholt) was an unusual song in which the sounds of rubbing a brush, tearing newspaper, and hitting a cushion were hectically repeated while koto player Maya Kimura passionately shouted the sounds of “ah,” “oh,” etc.

“Coming Together” (composed by Frederic Rzewski) was a performance by shamisen player Hidejiro Honjo and rapper Darthreider. Between the beats of the music, Darthreider threw in short phrases uttered with his powerful voice. Their energetic performance was mind-blowing. 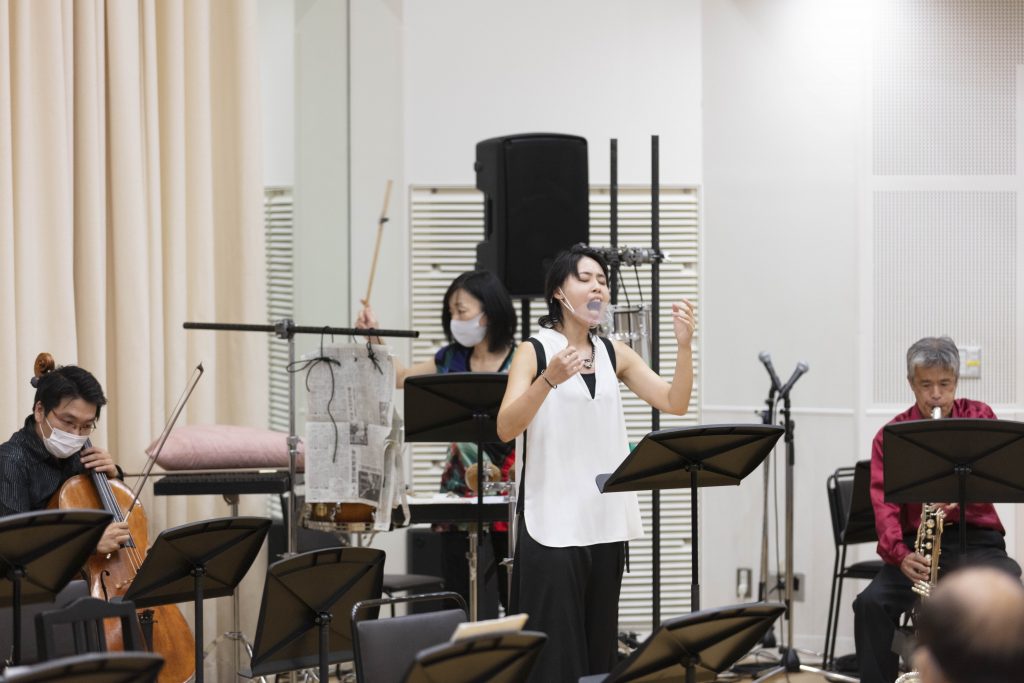 At the “Born Creative” Festival 2020, the focus was on Japanese musicians and traditional musical instruments, offering the participants opportunities to experience numerous new sounds created in Japan. Also, the programs expressed physical nature in music thanks to the live music performed at close range and complemented by human voices.

The second article introduces the Special Concert and Born Creative Festival for Grown-Ups!, with comments from Dai Fujikura.