Fending Off a Plague with Strange Creatures! Edohaku Culture: Fear and Faith of Edo I, Images to Fend Off Sickness 〈Edo-Tokyo Museum〉 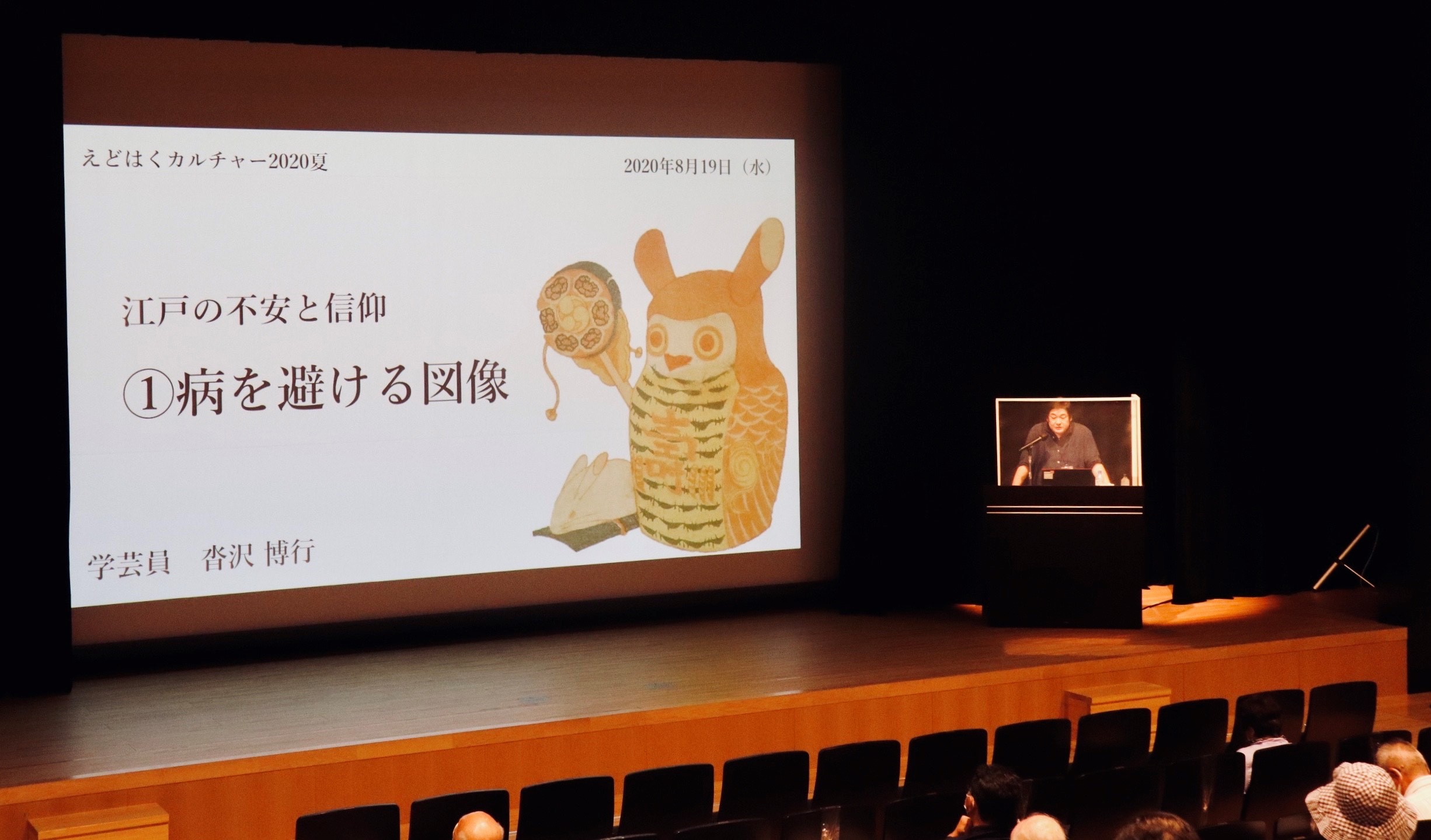 View of the lecture

As the spread of COVID-19 remains high, Amabie, a type of yokai [a class of supernatural monsters and spirits in Japanese folklore] that prays for fending off plagues, has become popular. The people of the Edo period, who had to battle against epidemics constantly, are said to have held prints depicting creatures with mysterious power, like Amabie, powerful deities, or samurai worriers as their protective charm. On Wednesday, August 19, 2020, The Tokyo Metropolitan Edo-Tokyo Museum held a lecture to introduce images that had been thought to fend off plagues, “Edohaku Culture: Fear and Faith of Edo I, Images to Fend Off Sickness” by the museum’s curator, Hiroyuki Kutsusawa , as the lecturer. The article summarizes the event.

The state of medical care and religious beliefs of Edo

The Edo period experienced a spread of numerous diseases, such as influenza, which was sometimes called “xx cold,” smallpox [housou in Japanese], and measles [hashika in Japanese], every few years. There was no specific medicine against the diseases, and, aside from the very rich, it was a time when doctors were not easily accessible by ordinary people. Instead, the people turned to various kinds of beliefs to ward off diseases and looked to drawings and prints as a protective charm against evil and sickness.

A red creature for fending off smallpox, the red warrior

Since ancient times, people have believed in a housou-gami, an evil deity of smallpox. The infection was nearly impossible to avoid and, as an old saying “smallpox decides the look, measles decides the life” suggests, left pockmarks on the faces of the infected. Therefore, people prayed that the symptom would be minor when infected.

When a family member was infected with smallpox, the family would place a housou-e [anti-smallpox picture], colored in shades of red, on places such as a dedicated altar called a housou-dana [anti-smallpox shelf] and give a housou-ehon [anti-smallpox picture book] to children. There are several theories as to why red was used. Some of them suggest that the color would give the power to avert evil or is hated by housou-gami, while others say that a red rash was milder than the darker one, which was more severe. 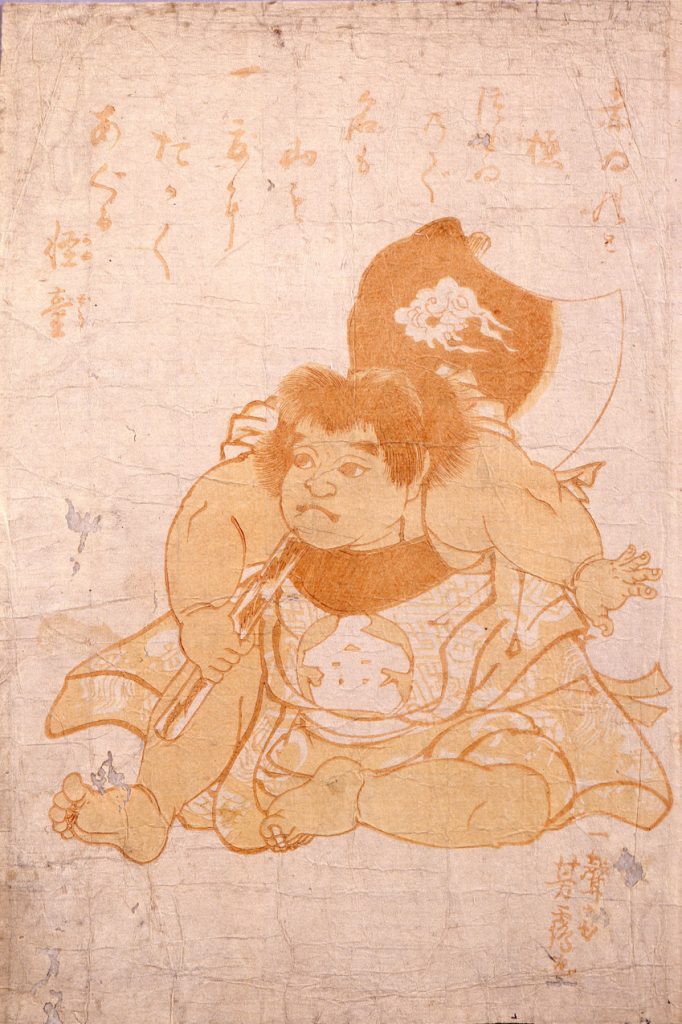 Often, the pictures depicted heroic characters such as the one on “Housou-e (Kintaro)”, as well as Minamoto no Tametomo, a samurai who is said to have driven a housou-gami away from Hachijojima Island, and Zhong Kui (Shoki in Japanese) who cured a Tang Dynasty emperor of the malarial fever. 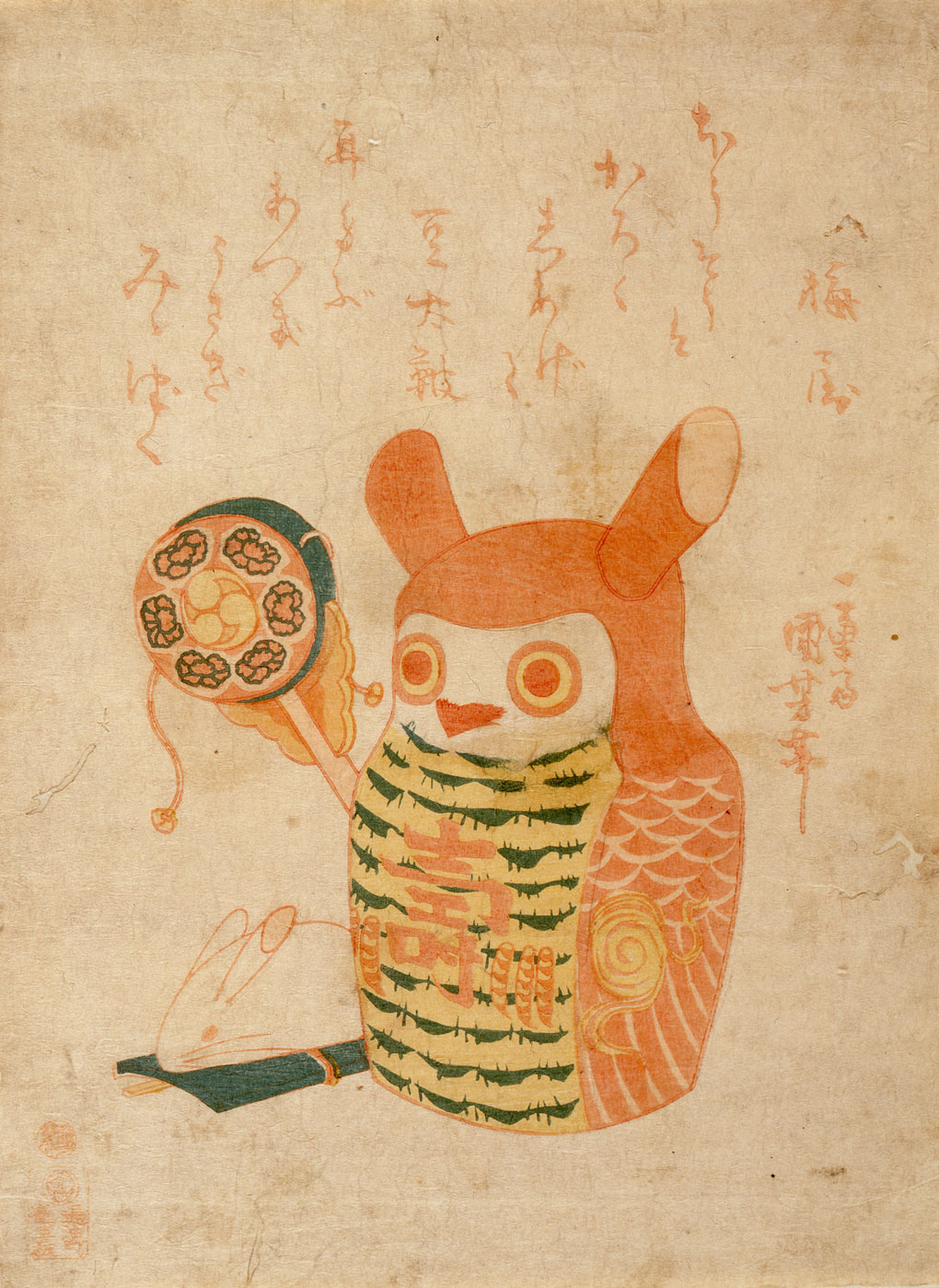 Depicting a red-eyed rabbit and a toy of a red horned owl whose large eyes meant protection from losing eyesight.

This is a housou-ehon about a daruma doll, a horse, and a hariko [paper-mache] tiger, printed in red. It was often given to children who had to spend a long time recuperating. In the book owned by the museum, the characters’ eyes are filled with sumi ink, suggesting doodling by a child.

By the 19th century, there was a spread of news about sightings of yokai with a human-like face or upper body attached to fish or shellfish. Such strange animals were, on the one hand, thought to be linked to illness by bringing immediate death when sighted or predicting epidemics. On the other hand, when drawn on paper, they were regarded as a protective charm against sickness.

In 1819 (Bunsei 2), hime-uo [princess fish], a fish with a human face that appeared in Hirado, Hizen Province, was circulated as a protective charm against sickness during a dysentery epidemic. In 1844 (Tempo 15), Amahiko was seen at the shore in Echigo Province and, in 1846 (Koka 3), Amabie was spotted in the sea in Higo Province. The record says that the two creatures predicted the spread of disease and conveyed how to avoid it. Many variations of such protective charms of monsters and yokai were produced and sold from the late Edo period, when the printing culture was prospering, until the beginning of the Meiji period. 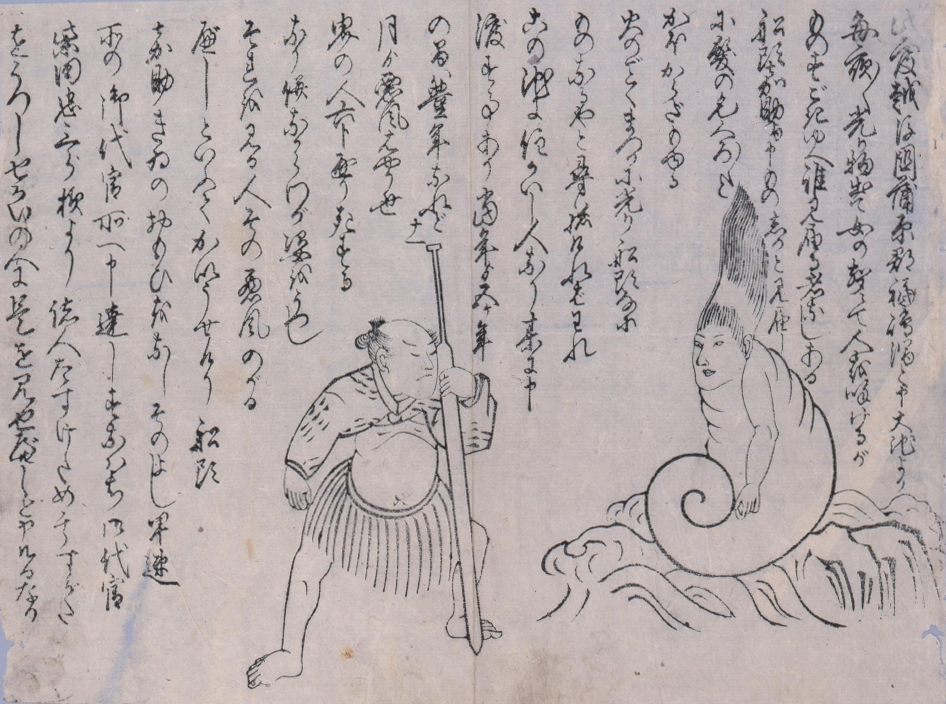 “Ningyo No Shutsugen To Sono Yogen Wo Houjita Surimono [Print Reporting the Appearance of a Mermaid and its Prophecy],” around 1849 (Kaei 2).

The mermaid appeared at Fukushimagata lagoon in Echigo Province had a face and body glowing in red with a female voice. It told a boatman that a cold  would spread and that seeing its depiction would fend off the disease. 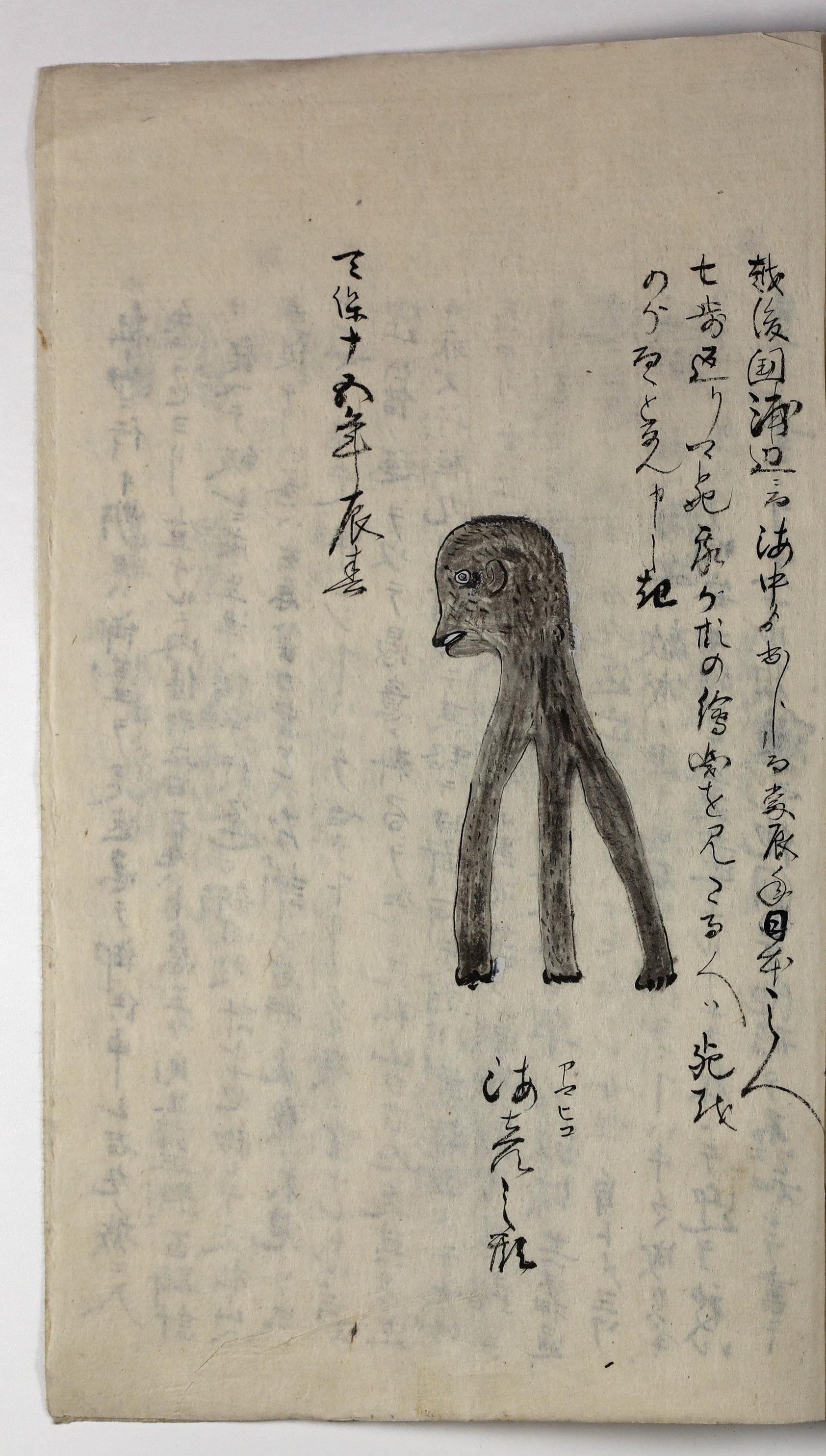 Depicting Amahiko, a creature with three legs extending from a monkey-like head. It predicts the coming of diseases but said that seeing a picture of it would drive away death. 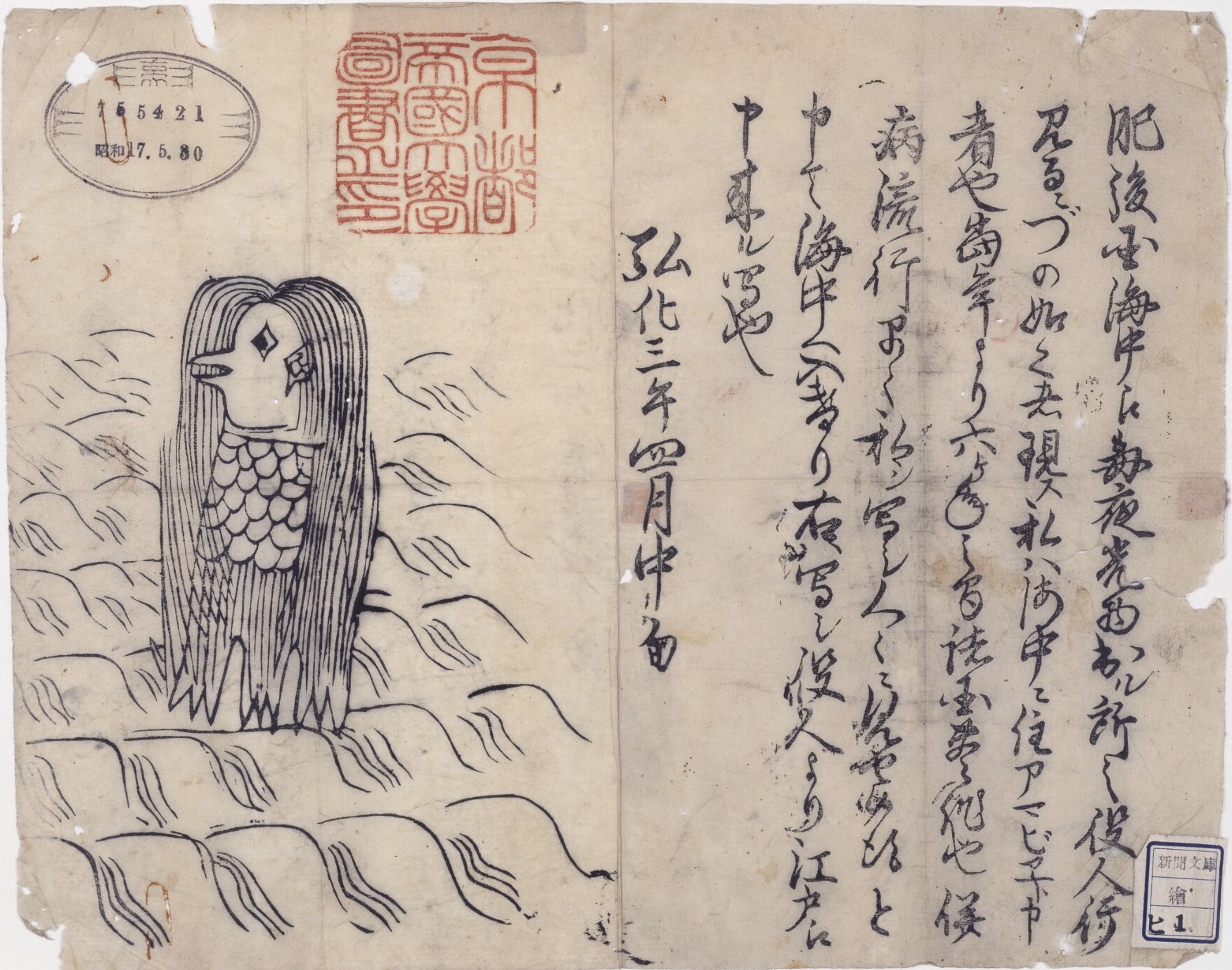 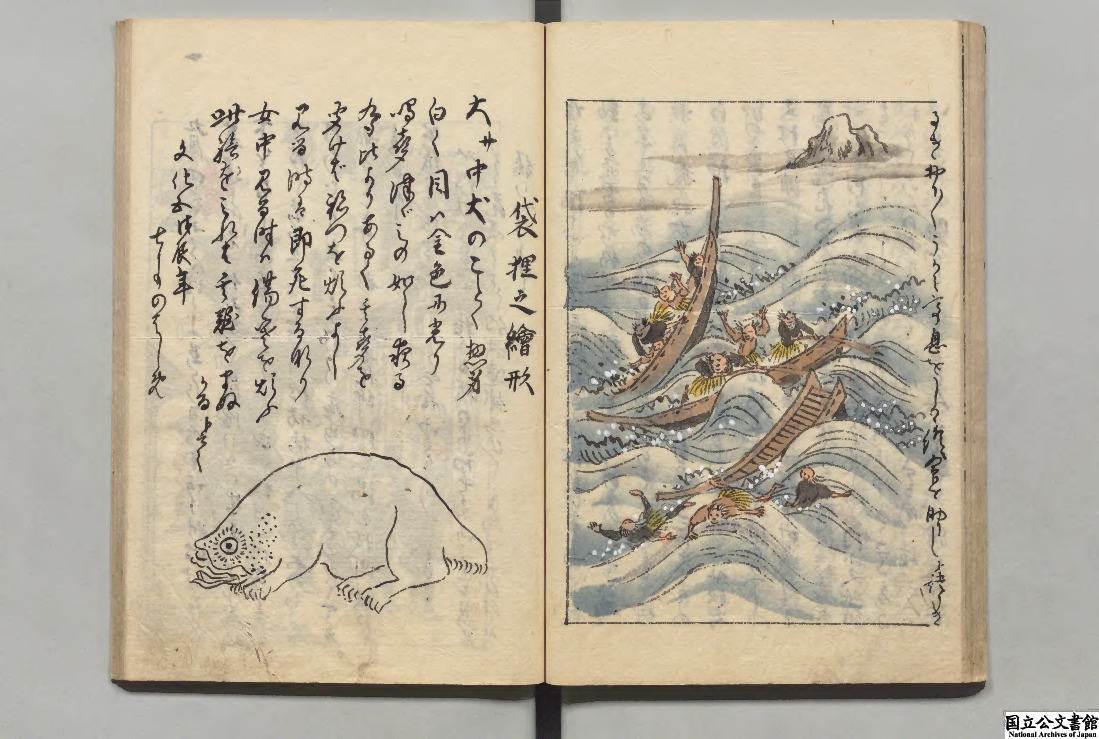 The Fukurodanuki is about the size of a mid-sized dog and has a white body and golden eyes. It was said that hearing its drum-like cry would cause a high fever, and seeing it would bring an immediate death, but looking at a drawing of the creature would ward off the danger.

Hashika-e as a source of information and a reading material

In the summer of 1862 (Bunkyu 2), toward the end of the Edo period, the city of Edo saw a high rate of death due to cholera and measles. Cholera, which was brought to Edo via Nagasaki during the period of national isolation, does not have much information or images left to this day. On the other hand, for popular diseases like measles, images as a protective charm and hashika-e [anti-measles picture] with a note on medicine and food for the disease, as well as the years of previous outbreaks, were published. 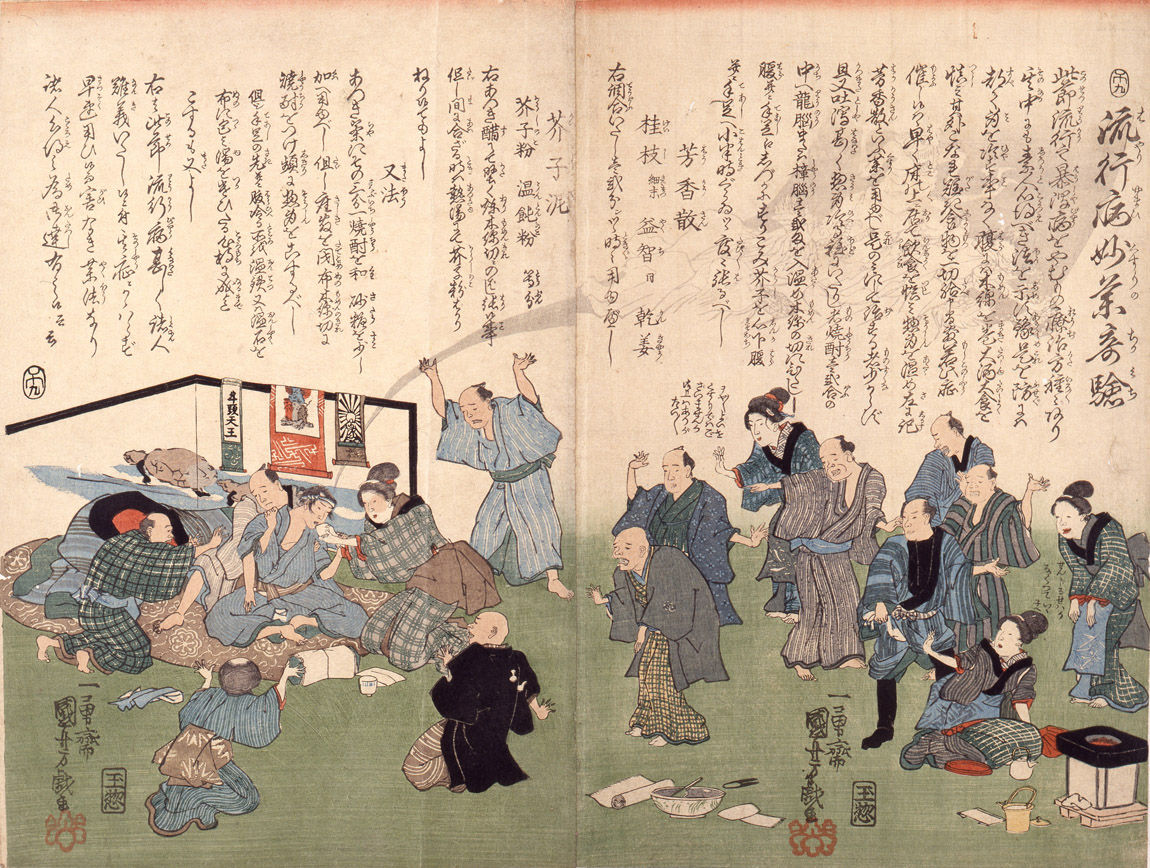 The dark shadow coming out of a man with a teacup to his mouth is a depiction of cholera. The writings indicate how to make an aromatic powder, a type of internal medicine, and mustard plaster, a type of poultice. 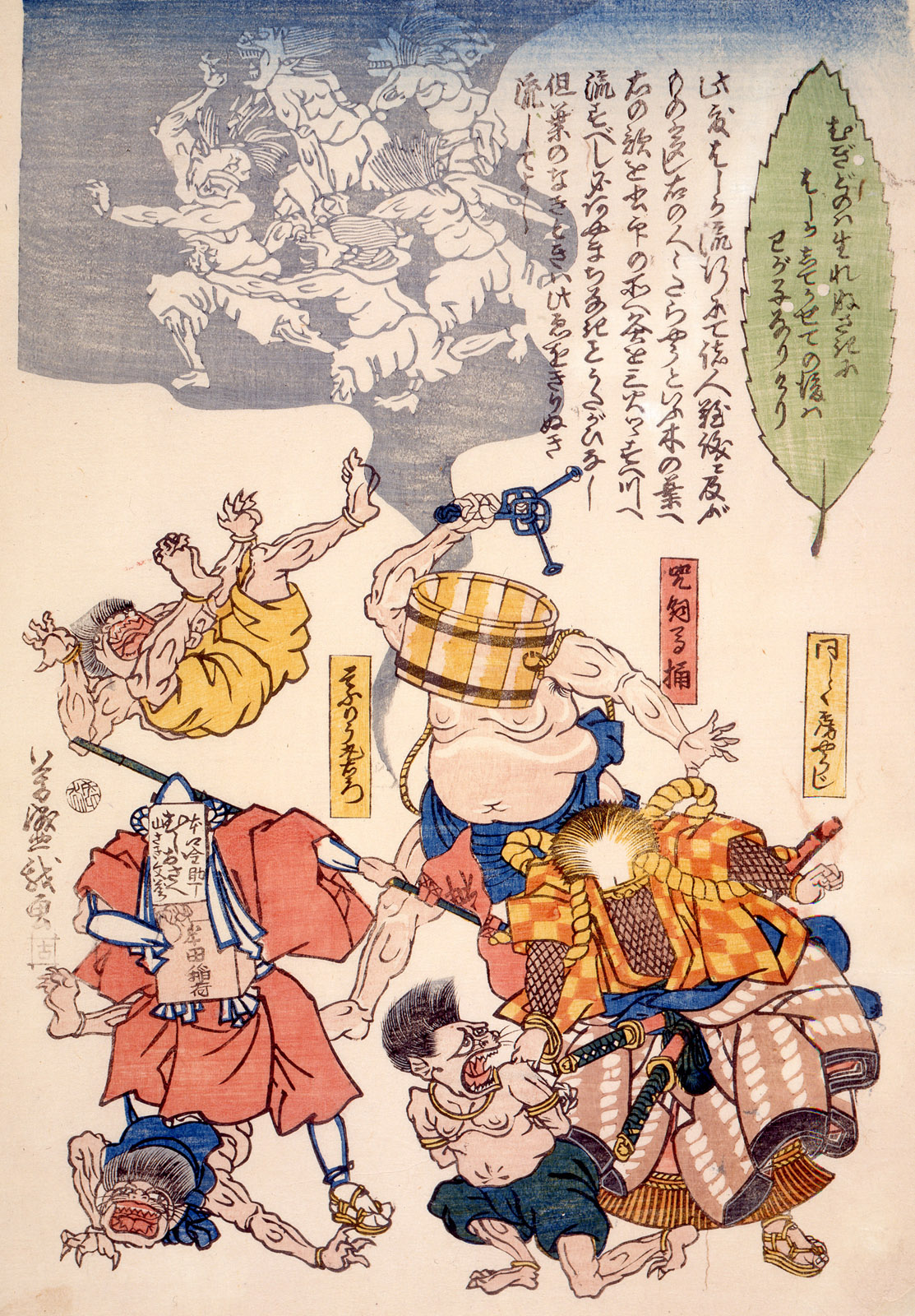 Items that are effective against measles are personified and fighting against demons, which symbolize the disease. To the top right is a leaf of tarajo holly. It was believed that writing the above verse on the leaf and placing it on the river would lessen the symptoms of measles.

According to the lecturer, Mr. Kutsusawa, the contents of Edohaku Culture are created by each of the curators based on the accumulation of their usual work, such as exhibitions they are in charge of, and the lineup of the past lectures. The day’s lecture introduced, without focusing too much on the theme of an epidemic, a variety of prints that expressed the unique mentality of the Japanese people who made comical drawings of animals, yokai, and deities to pray for protection from diseases. The lecture was conducted with thorough countermeasures against COVID-19, such as hand disinfection, temperature measurement, and ventilation, and the participants were listening enthusiastically to the contents.

A hariko doll based on the woodblock print of the housou-e , Horned Owl, mentioned in the lecture is also on sale at the museum shop of Edo-Tokyo Museum.

The second of the series, “Edohaku Culture: Fear and Faith of Edo II, Visiting the Sites of ‘Hayarigami’,” will explore further into hayarigami [deities who become temporarily popular, often at times of an epidemic or a disaster] who are said to drive away disastrous events.

◆Edohaku Culture: Fear and Faith of Edo I, Images to Fend Off Sickness

◆Edohaku Culture: Fear and Faith of Edo II, Visiting the Sites of “Hayarigami” 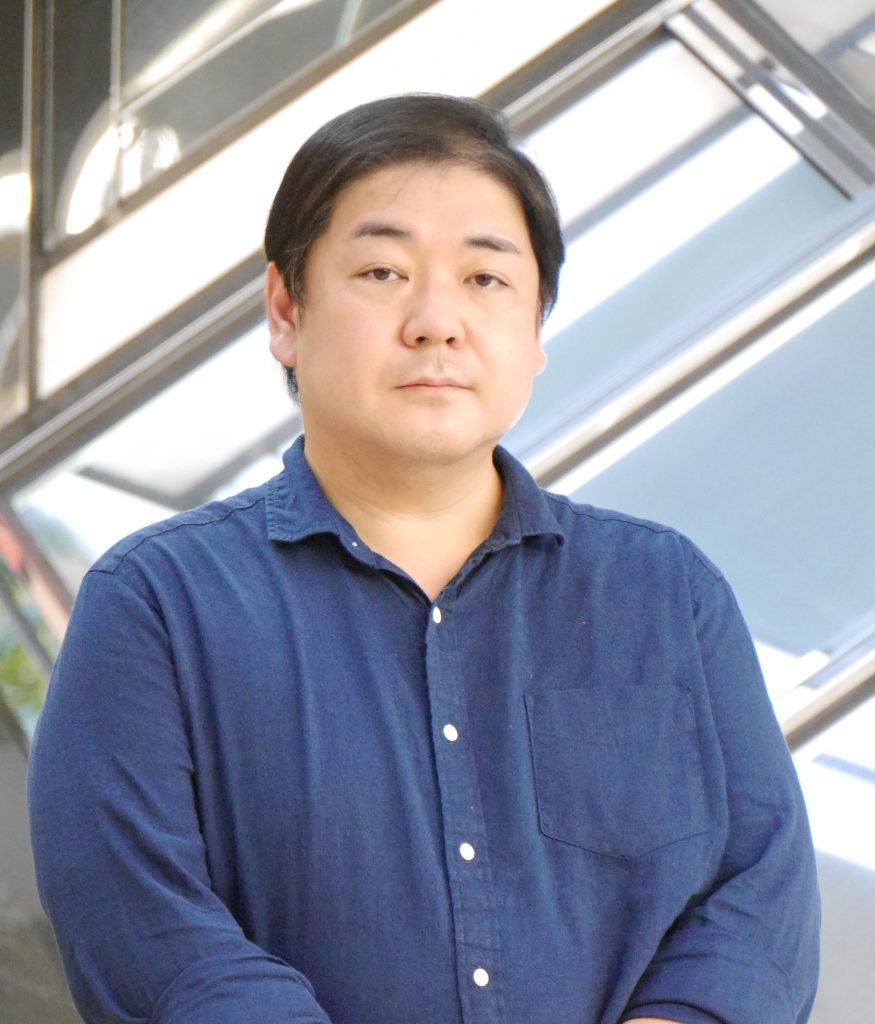 Curator at Tokyo Metropolitan Edo-Tokyo Museum. He studied Japanese folklore and modern history. Exhibitions he curated include EDO and BEIJING — Cities and Urban Life in the 18th Century —  (2017), Tokyo 150 Years  (2018), and The History of Sport in Japan — From the Edo Period to the Tokyo Olympics  (2019).

＞＞Deities Created by the People Edohaku Culture: Fear and Faith of Edo II, Visiting the Sites of “Hayarigami”