The Tokyo Metropolitan Theatre is working to provide support for the viewing of theatre and music performances. There are different programs for those who have visual impairments and those who have hearing impairments, each of which is designed to allow the art of theatre to transcend disabilities.
We spoke to the theatre about their programs for the visually impaired.

What is ‘Theatre Orientation for the Blind’? 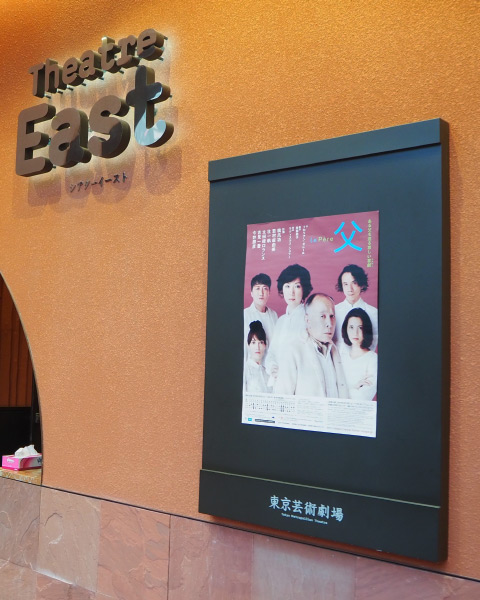 Theatre East at The Tokyo Metropolitan Theatre, where Le Père (The Father) was performed

Viewing support was provided for the play Le Père (The Father), performed in February 2019. The piece, which won ‘Best Script’ at the Moliere Awards – the most prestigious theatre awards in France – was performed for the first time in Japan, starring Isao Hashizume as the main character, André, who is diagnosed with Alzheimer’s disease. The play depicts changes in the world and personal relationships through the viewpoint of this man, for whom memory and reality are blurred. A “theatre orientation for the blind” was held prior to the performance so that visually impaired audience members could understand this complicated world. 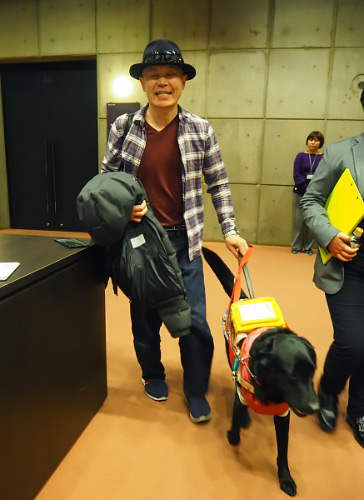 Satoru Kaneko, participating together with his guide dog, Eccles

Around 20 people with visual impairments took part in this orientation. In the lobby of the theatre, people gathered with guide dogs, white canes and helpers.
We asked Satoru Kaneko, who is a blind guide dog user, to attend the orientation and experience the viewing support. 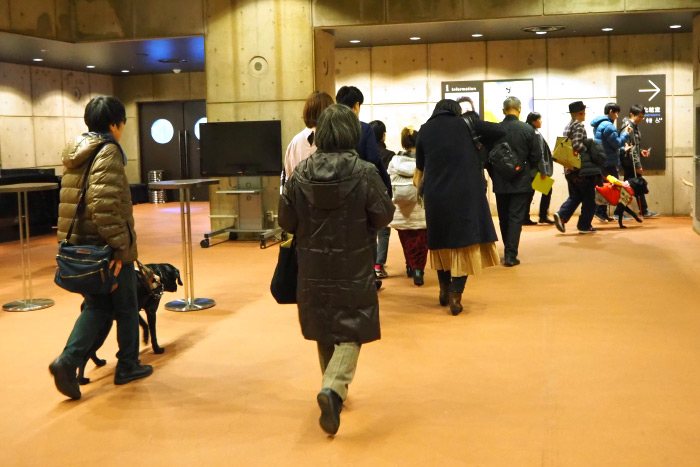 A facilitator describes the set detail by detail

The width and the depth of the stage were conveyed through footsteps. The facilitator walked slowly, counting out his steps, to allow the attendees to create an image of the stage in their minds. He also explained in detail the table, chairs and curtains on stage. These explanations were full of sensory elements, such as tapping on the leather sofa to allow the sound of the material to echo.

The participants did not only receive explanation, but actively asked questions as well. These questions were all specific, such as “are there doors on the stage?”, “what are the sofa and chairs facing?” and “is there anything on the round table?”

After the lecture about the stage, everyone moved back to the lobby, where the story and the setting of the piece were introduced. The characters’ heights and physical features, as well as their clothing, were introduced in great detail in order to create distinct impressions for each of them.

There was also a brief explanation of the narrative. Le Père is a story about how a father who has dementia sees the world, which is reflected in the stage set and the narrative. The facilitator’s honest admission that “it might be a bit of a difficult story” drew laughter from the attendees, hinting at everyone’s excitement for the performance. 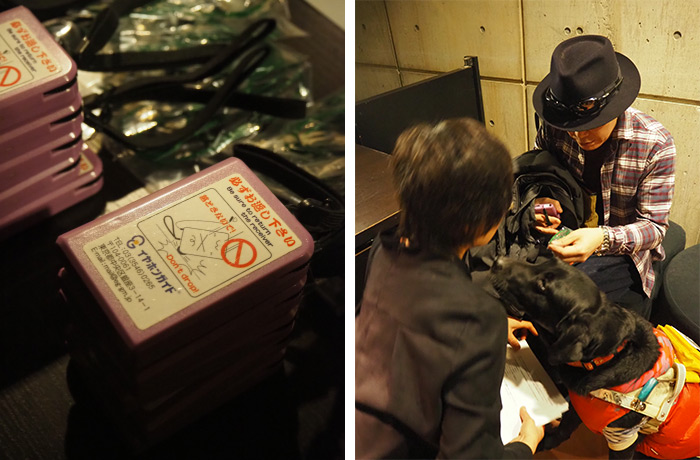 After the orientation, an audio guide receiver was given to each participant. The movement of the actors, as well as changes in the setting and stage effects were explained live through this device, rather than pre-recorded.

Listening to this device during the play, we could hear descriptions of the progression of action, such as “so and so gets up” or “he drops his head”, as well as explanations of when the stage went dark or the set was changed. 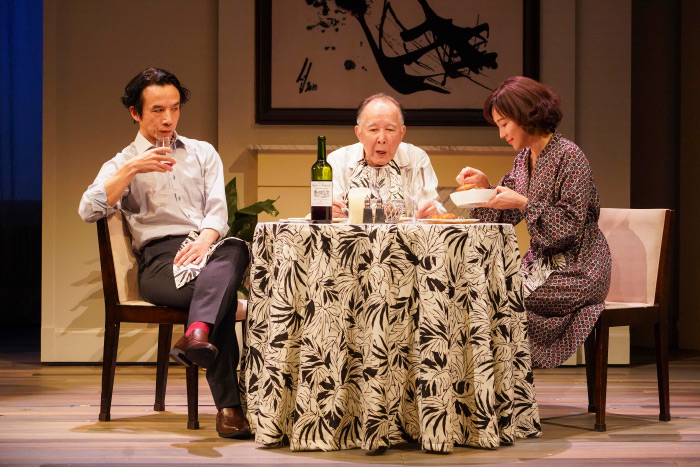 The image generated in the orientation before the play was updated in real time with the help of the audio guide. These two forms of support made it possible for the visually impaired audience members to enjoy the theatrical performance.

How was the experience of the performance with viewing support?

How beneficial was this viewing support? We talked with Kaneko about his impressions. 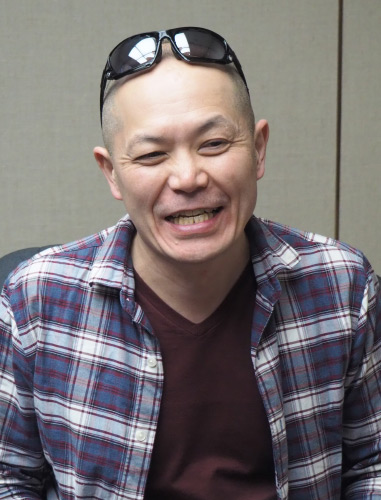 Because audio guides must provide commentary at the pace of the actual play, they are typically provided live. For that reason, the commentary sometimes gets delayed, or provides too much information.

Kaneko: I understand the tendency to over-explain in order to help visually impaired people to understand. However, just like other people, we can compliment a lot of what we hear with our imaginations. If there is space for us to use our imagination we can really enjoy the play. The guide here had a clear understanding of this and provided appropriate information. 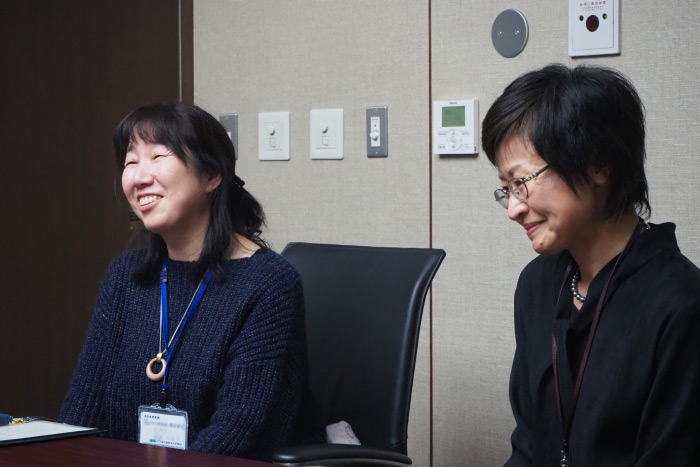 Tamuro and Sato of the Tokyo Metropolitan Theatre

In this way, a visually impaired person can enjoy plays at the Tokyo Metropolitan Theatre with viewing support. According to Ms. Tamuro, Chief of Education Program Section, the program was launched because “as a public theatre we wanted to serve every type of audience.”

It has been about 5 years since the theatre began offering viewing support. Through regular implementation during that period, the theatre has seen both clear achievements and further possibilities.

Tamuro: Once when actors from the UK were performing here, they introduced themselves to the visually impaired audience with the character’s name. Matching the role and the actor’s voice deepens their response to the work. Working together with the production could allow us to create an experience that people with disabilities could enjoy more. It is not an easy challenge, but one that is appropriate for a public theatre.

The theatre will continue to experiment as they seek to overcome persistent challenges.

Sato: We do not want people with disabilities to think of the theatre as a kind of different world from their own. That is why we want to make an active effort to work on the piece with the production team. It would be fantastic if we could all put our heads together when developing a play to think about what we could do to convey a deeper understanding to the audience.

“What comes first is making theatre enjoyable for everyone.” The expansion of this program could help make our lives a little richer through theatre, whether we have disabilities or not.

The Tokyo Metropolitan Theatre also provides various services for people with disabilities to use, such as subtitle devices for those with hearing impairments. For more details, see the theatre’s barrier-free page .