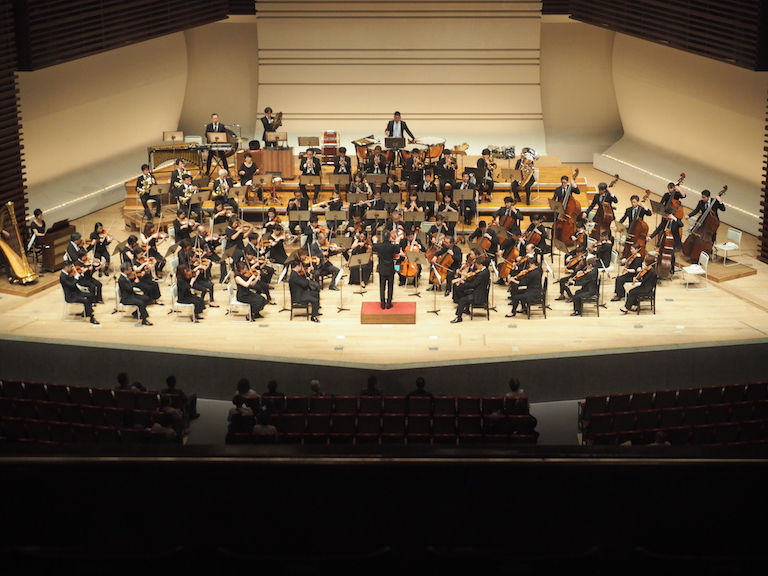 What if a disaster occurred in the middle of a concert?

On May 7th 2018, an “Evacuation Drill Experience Concert” was held with the aim of allowing audience members, performers and staff the opportunity to participate in a realistic drill of the venue’s disaster evacuation procedures.

This type of concert, combining the appreciation of music with a disaster evacuation drill, was first performed at Art Tower Mito in Ibaraki Prefecture following the 2011 Great East Japan Earthquake. That inspired similar events at other facilities, and so the concept spread across Japan. In Tokyo in particular, in anticipation of the 2020 Olympics, the need to improve crisis management systems has increased. 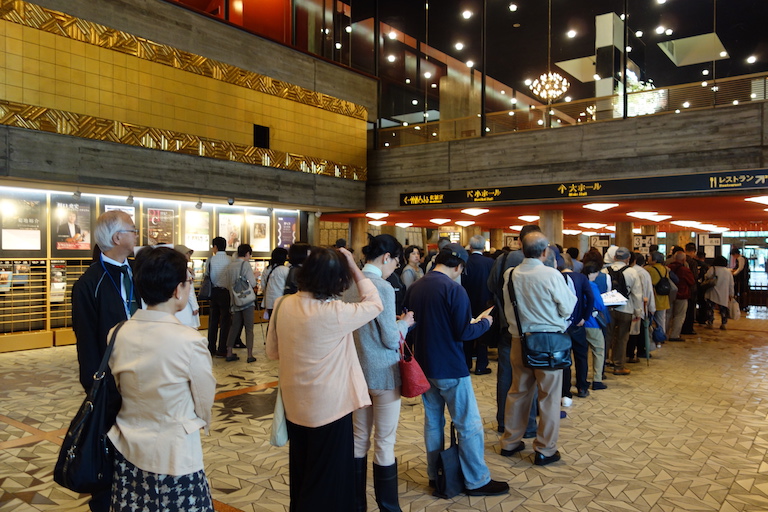 Before the doors open, a long queue of ticket winners line up outside

This “Evacuation Drill Experience Concert” offered the opportunity to experience an evacuation in the middle of a concert. Around 1,000 people applied for the 600 spaces available, showing the high level of interest people have in disaster prevention.

On the day of the concert, the audience members, who had been selected by lottery, entered the hall. They were informed in advance that the evacuation drill would take place during the performance, but the exact timing was kept secret, so some individuals appeared to be looking forward to the concert with a certain tense expression. 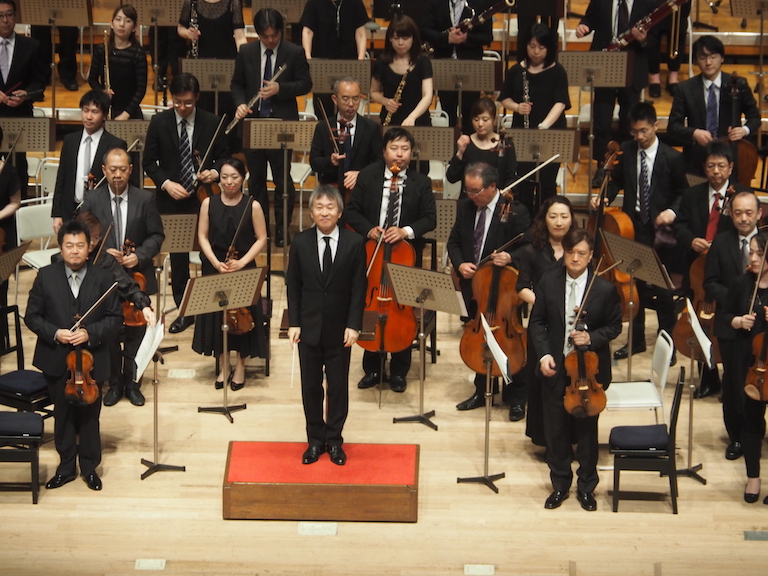 The concert commences as usual. The audience is pleased with the stellar performance!

The concert began. The opening piece, performed by the Tokyo Metropolitan Symphony Orchestra under the direction of conductor Toshiaki Umeda, was John Williams’ Main Title theme from Star Wars. After that, the sections of the orchestra – strings, wind etc. were introduced one by one. The brass section members demonstrated playing just the mouthpieces of their instruments, causing a sound like a cat’s cries to echo through the hall, putting everyone at ease.

After the introductions were over, the orchestra performed Brahms’ ‘Hungarian Dance no.5’, Yuzo Toyama’s ‘Rhapsody for Orchestra’, which features Japanese percussion instruments like hyoshigi (wooden clappers)and shime-daiko(tightened drum), and the powerful fourth movement of Dvořák’s ‘ Symphony No.9 in E Minor “From the New World”’. 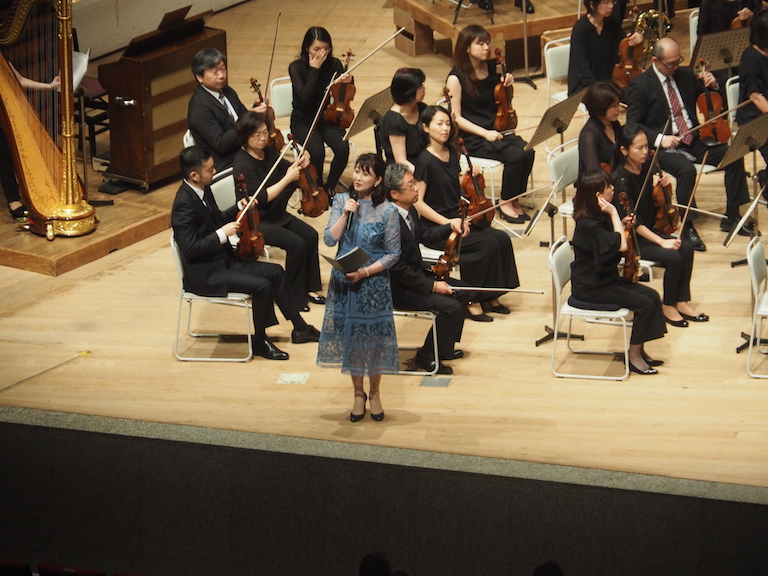 Yoko Ebara, who acted as MC for the event, gave an enjoyable talk, and the concert neared its end. Immediately after the start of the second encore piece, the sound of rumbling earth echoed through the hall, and all of a sudden the room went dark, and the performance stopped. 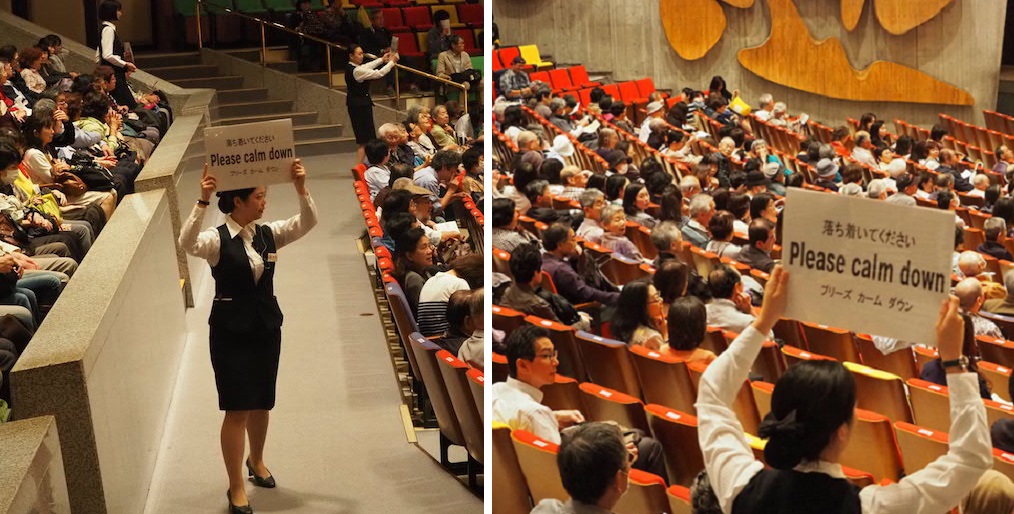 An earthquake strikes! First, from the stage and the audience area, everyone is advised to stay calm.

When the lights came back on, staff on stage reported that an earthquake had occurred, but that as the building accorded with earthquake resistance standards, everyone was safe. An announcement was made asking everyone to wait while the condition of the building could be checked. Staff displaying placards with the message “Please calm down” in English and Japanese walked around the hall.

However, after that, it was announced that a fire had started in the kitchen of the restaurant on the basement floor. The staff declared that the performance would be suspended, and as a precaution, everyone would be evacuated to the lobby. Staff use written placards and flags to guide the audience.

With the help of staff carrying placards and flags with the message “EVACUATION ROUTE”, the audience were able to calmly move to the designated evacuation area. The original plan was for the audience to be evacuated outside, but as it was raining, they gathered in the foyer of the main hall. After everyone’s safety was confirmed, the drill was over.

The purpose of the Evacuation Drill Experience Concert: How to offer support to visitors during an emergency. After the drill, Mr. Otani, Head of Fire Prevention at the Ueno branch of the Tokyo Fire Department, offered a review. According to Mr. Otani, there were three points behind the Evacuation Drill Concert.

・In an emergency, what kind of directions should be given to allow for evacuation?
・How can a relatively small number of staff offer support to a large number of people while preventing panic?
・What is the best way to offer guidance to the elderly and the disabled in an evacuation situation?

He remarked that during the event, after the emergency started, the audience was quickly told that the building was earthquake resistant, promoting a calm attitude. Everyone was warned about possible aftershocks, and told to protect themselves by holding their bags or coats over their heads. When evacuation commenced, the route was made clear by way of placards, and staff did a good job of guiding the audience to the evacuation point. “It was a very realistic and meaningful drill which gave calm and collected guidance,” he added.

During the review, Mr. Otani also pointed out that even if a building is highly earthquake resistant, you can never be too careful. Should the ceiling come down, lowering your head below the level of the backs of the chairs could save your life. Split-second decision making is vital when it comes to self-preservation. Mr. Otani’s final remarks referred to the unpredictable nature of earthquakes, and the importance of everyday preparations within one’s family and social circle. He stressed that each individual should take responsibility for protecting himself, and make an effort to learn more about disaster prevention measures. 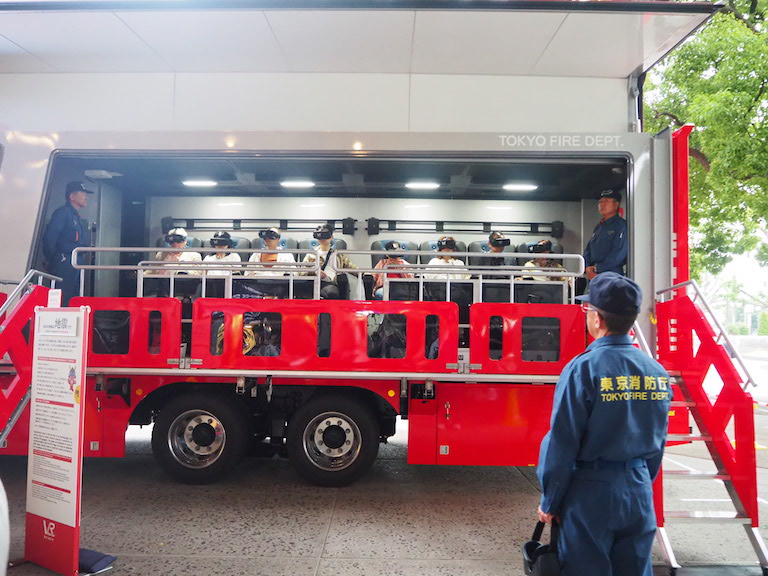 A VR disaster prevention car, where you can experience a realistic earthquake scenario.

On the day of the concert, outside the venue Ueno Fire Station set up installations that allowed people to experience tremors, smoke, and other aspects of disaster situations.

At the earthquake experience virtual reality corner, participants were able to experience tremors from a seated position. The VR goggles create images of falling furniture and household items, while your body feels the shaking of the earthquake. The “Smoke maze House” uses safe, artificial smoke, but simulates the smell and effect on breathing of real smoke

This is the smoke maze tent, where pulling back the entrance flap is enough to envelop the area in smoke. On entering, a wall of smoke blocks your view completely and breathing becomes painful, which makes reaching the exit – only five metres away – quite tough. A member of the fire service recommends that, when evacuating in these kinds of smoky conditions, you should use a handkerchief or similar to protect your mouth against inhaling toxic substances, stay low to the ground to prevent losing your way, find areas where smoke is thinner, and follow the path of walls.

“The concert was really good, but when the evacuation drill started, possibly because I was sitting near the front, I couldn’t make out what the staff members carrying placards were saying. I think it would be a good idea if they had staff at the front, or if they spoke a little louder.

“When I next go to a concert, with the knowledge I gained this time, I think I’ll know how to act. Also, when an earthquake occurs the trains stop, so even after safely evacuating the hall you’re left thinking, ‘What should I do now?’. In future I thought it might be a good idea to take water and a little food with me when going out.”

Tokyo Bunka Kaikan’s Evacuation Drill Experience Concert was held because earthquakes can occur at any time. It was the first event of its kind at a public cultural facility in Tokyo, and it offered an enjoyable musical experience while also making everyone think about disaster prevention and evacuation, surely making it a worthwhile endeavour.