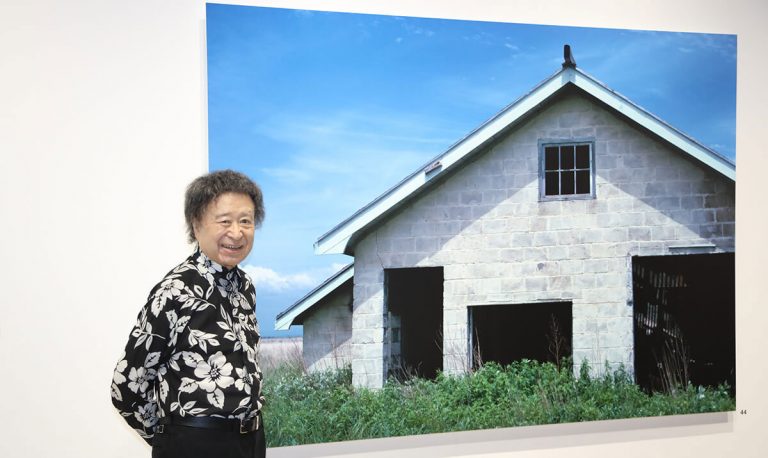 Since the 1960s, Kishin Shinoyama has stood in the forefront of photography with his photos that have captured vivid glimpses of the changing times. Until Sunday 15 August 2021, Tokyo Photographic Art Museum is home to a solo exhibition entitled A New Fine Day – Kishin Shinoyama, through which visitors can gain a deeper understanding of Shinoyama’s six decades of work. Surprisingly, this is the first time the Tokyo Photographic Art Museum has hosted an exhibition of Shinoyama’s work. We talked to Shinoyama about the exhibition, which has as its core Shinoyama’s 1975 photography collection A Fine Day, and about his goals for it.

(The following is a summary of our discussion, written in the first person from Shinoyama’s perspective.)

Exhibiting the work of Kishin Shinoyama, a man of the times

Photo exhibitions are normally organized around a single subject or theme that makes the exhibit a cohesive unit. That was the first concern I had when Tokyo Photographic Art Museum curator Akio Seki came to me and asked me if I wanted to do a solo exhibition. To be honest, I didn’t think we could find the sort of cohesion a museum would want in my photography. 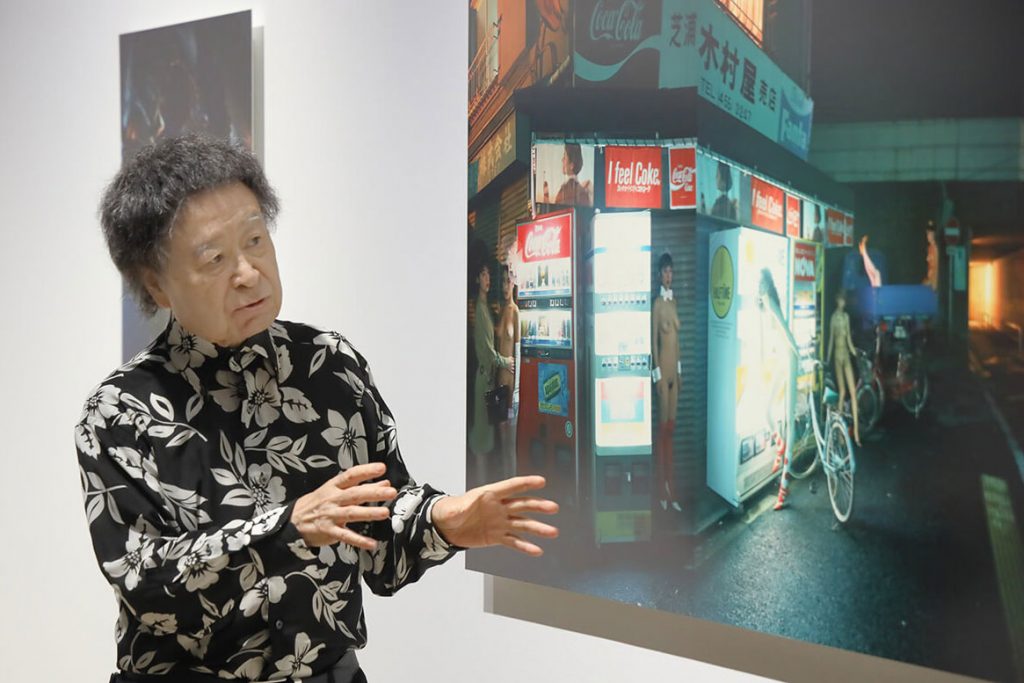 Ever since I started taking photographs 60 years ago, I’ve just turned my eye to things I find interesting. That has led to me photographing a diverse range of subjects and themes using various techniques and equipment – everything’s amazingly disconnected. So if we were to try and find an overall impression of my work and build an exhibition that would be good for a museum, we’d end up giving people glimpses of many different series of works, with three or four photos from each, and trying to connect them together. If you don’t do it right, it might end up being mistaken for a group exhibition of the work of 30 different photographers, and that wouldn’t be very exciting. 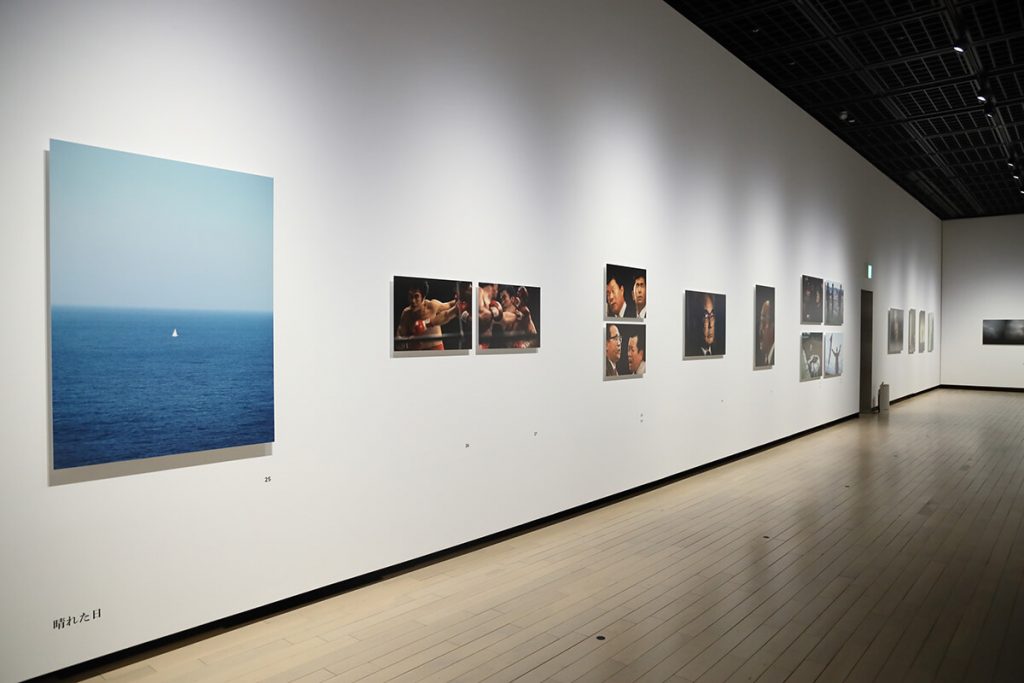 Exhibit of works from the A Fine Day series

But Seki is truly a veteran curator and already had an idea in mind. He told me that what he most wanted to show was A Fine Day, and he wanted to structure the exhibition around that series. A Fine Day was serialized in 1974 in the weekly magazine Asahi Graph. Each week, I took pictures of the most popular people and places and events and they’d be published right away. That went on for about six months. I just took pictures of the trendiest stuff I could find and put them out there. And if I really think about it, that’s essentially what I’ve been doing for the last 60 years of my life as a photographer. This all made me realize that A Fine Day really stands as a symbol of my photography as a whole. 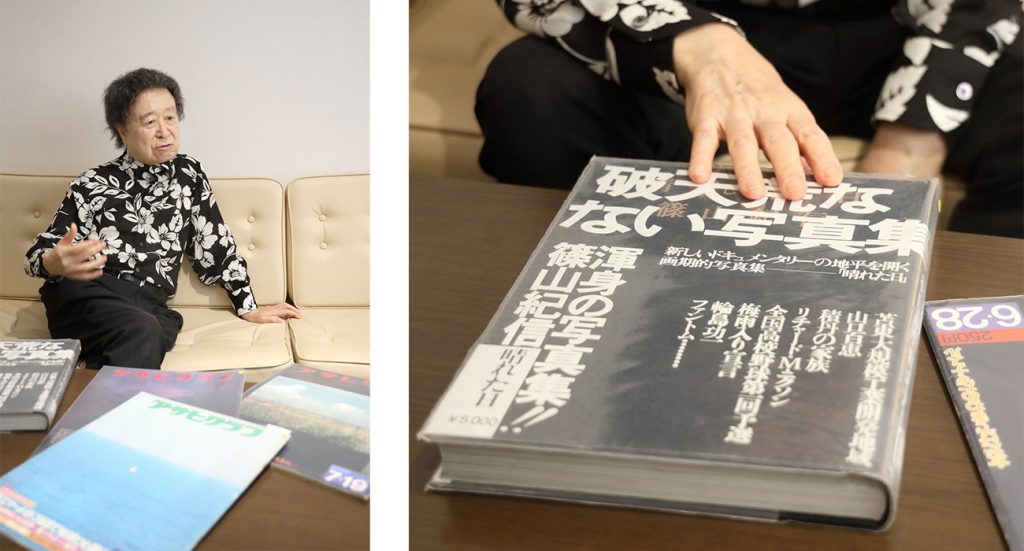 The title A New Fine Day is derived from the photo collection A Fine Day (published 1975), which was based on the series of photographs published in Asahi Graph when Shinoyama worked there as a correspondent.

I realized that we could take the format of A Fine Day, which lasted six months, and then expand it to cover 60 years as A New Fine Day. If we did that, the theme would be all about my theory of photography and it would communicate how I relate to it. Just like A Fine Day, where every week was a completely different theme and a different method of photography, all we would need to do for the exhibits in A New Fine Day is put up different types of photo on each wall. I really appreciate Seki for coming up with such a great idea.

Here are some copies of Asahi Graph from the time when A Fine Day was serialized, and it’s nice to see them now. Each of them is packed with just photographs for pages and pages, starting from the very first page, and they even used large copies of my pictures on the covers. It reminds me that it really was the true era of photography. 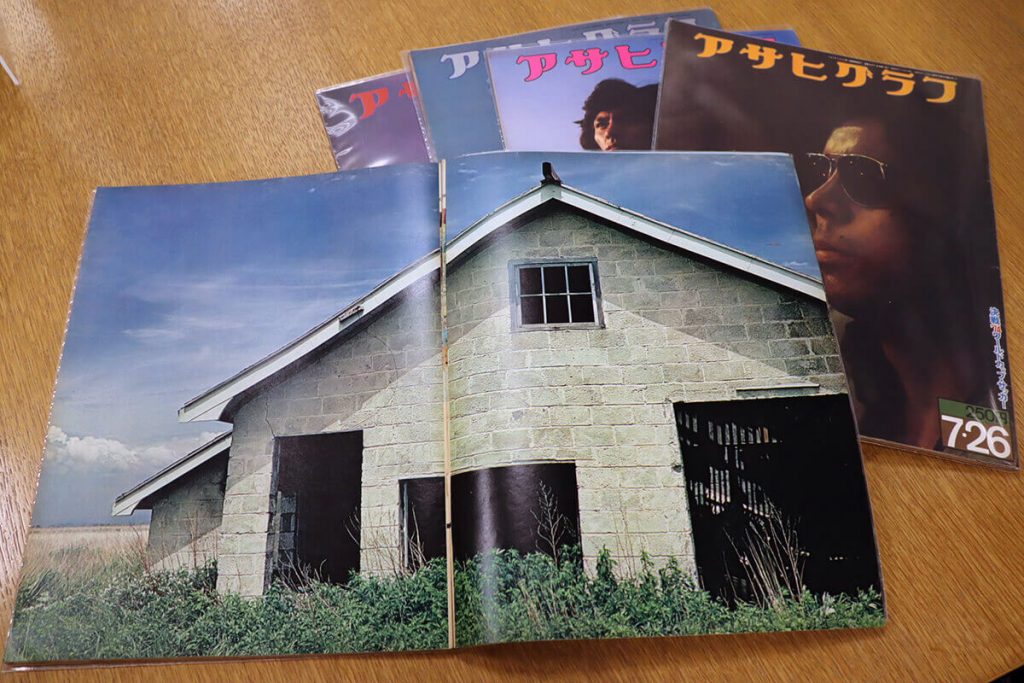 Shinoyama told us that he selected from the hottest topics of the week for his Asahi Graph series – from entertainment to sports, from government to frozen glimpses of daily life – and he used different methods to take his photos each time.

The 1970s was a time when people did a lot of experimental stuff like this, trying to see what sorts of amazing things could be done with photography, and always testing the potential of new forms of expression. There was a lot of media out there where you could show your work – there were more than ten photography magazines alone. A lot of money was being thrown at advertising photography, and Japanese camera makers kept gathering momentum as they developed new products to sell around the world.

As a photographer, I was always very excited during that period. And that feeling led to being able to take a lot of amazing pictures. It was kind of like the era itself was making me take the photographs. 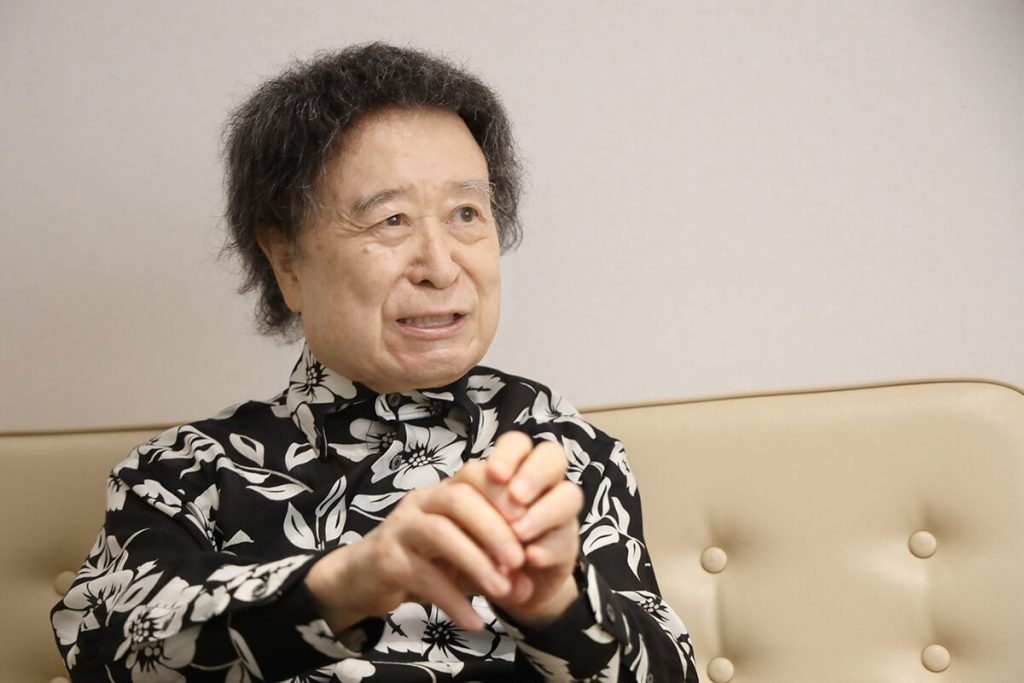 But now the times are no longer so closely tied to photography. It’s not likely that photographs will disappear, but the breadth of photographic expression is gradually growing smaller. Paper-based media outlets are disappearing, and everything in the world can now be done digitally instead.

I’m not saying that there is anything wrong or bad about digitalization, but it’s definitely different than traditional film photography. We can almost say that photography is finished. I pulled out front and find myself the last runner in the race. You could even call me the last real photographer.

Making people happy with photography is most important 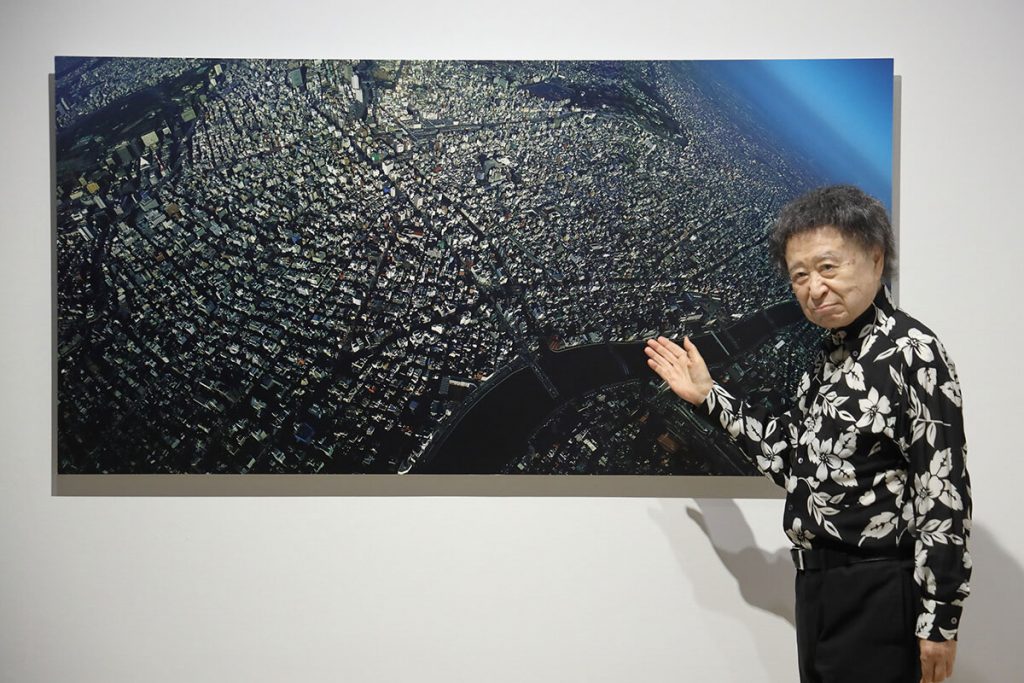 Standing in front of Tokyo Nude 1990, a work made with a process Shinoyama called Shinorama, which used three cameras.

This is a unique exhibition with me as its theme, but visitors have told me that the more they walk around the venue and see the exhibits on display, the less they understand exactly what my photography is. I think that’s interesting. It’s a unique feature of photographic expression. The more you use all your creativity and squeeze the essence of a photo into an image, the less of the photographer remains. All that’s left is simply the subject itself. That makes photography different than other artistic genres and it’s a part of its charm.

Does it leave me feeling empty when nothing of myself remains in the works I struggle to create? No. Not at all. I’m not doing it because I want people to see how I express things or to feed my own ego. For me, the most important thing is to make the people around me happy with the photographs I take. 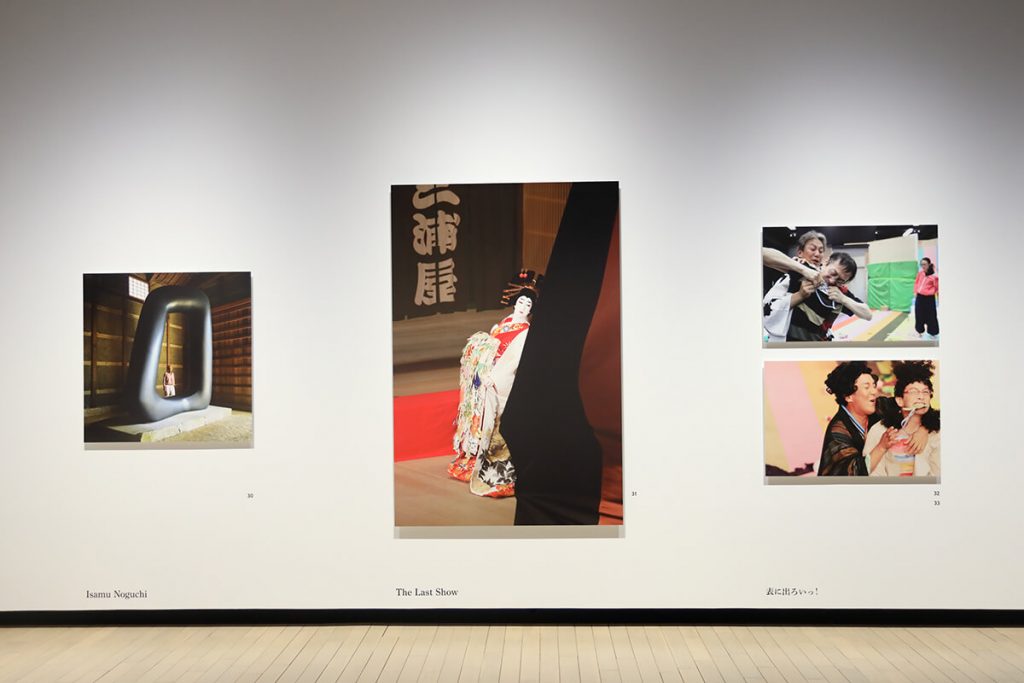 Shinoyama has photographed Isamu Noguchi, Tamasaburo Bando, Hideki Noda, Kanzaburo Nakamura and many other celebrities who symbolize the times in which they lived or live.

My becoming a photographer stems from something that happened when I was in fourth or fifth grade. A foreigner living near my parents’ house in Shinjuku had a German shepherd, and I took a picture of it with my parents’ camera. It was a surprisingly good picture. I got it printed at a camera shop and gave it to the dog’s owner, who was surprised and happy and really complimented me. All I did was take a picture and they thanked me a lot. It was amazing. Since then, I’ve loved photography more and more.

I want to show people. I want to make them happy. If I only have that, my expressiveness is complete, and my ego will be satisfied. You might call it altruistic, but I think photographs have the power to take people to that kind of place.

To tell the truth, photography is something that can be satisfying to someone in front of you, and at the same time can give you enjoyment. I’m the one who sees everything through the camera, and I’m the one who receives compliments for good pictures in the end. It’s a greedy thing that can fully satisfy myself and others. That’s what photography is. As an artist, I will be happy if people can fully experience that charm during the exhibition. 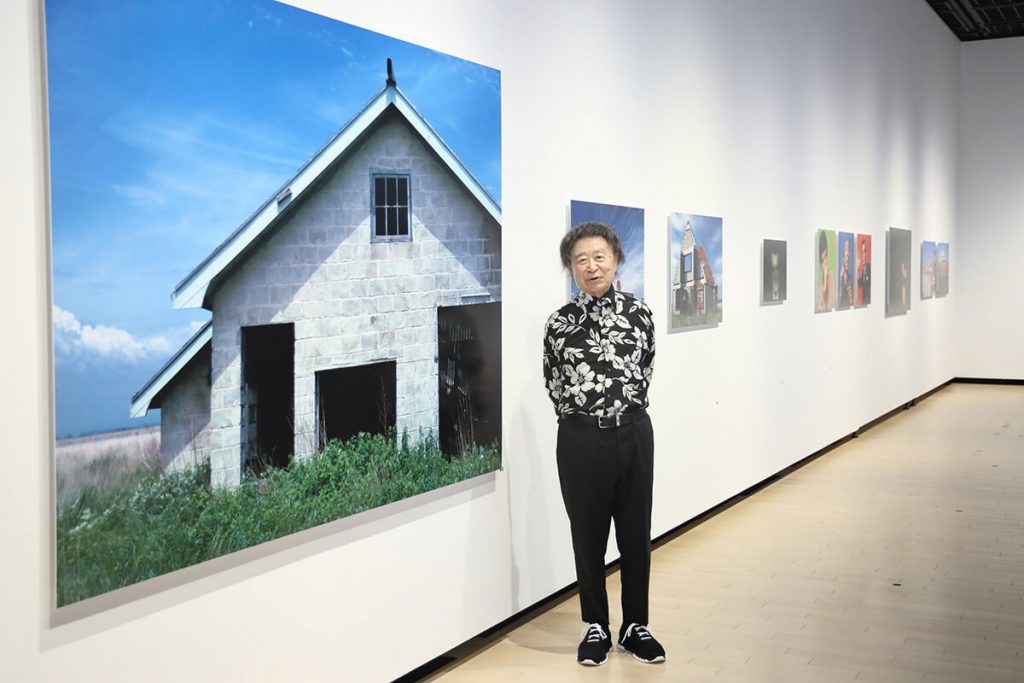