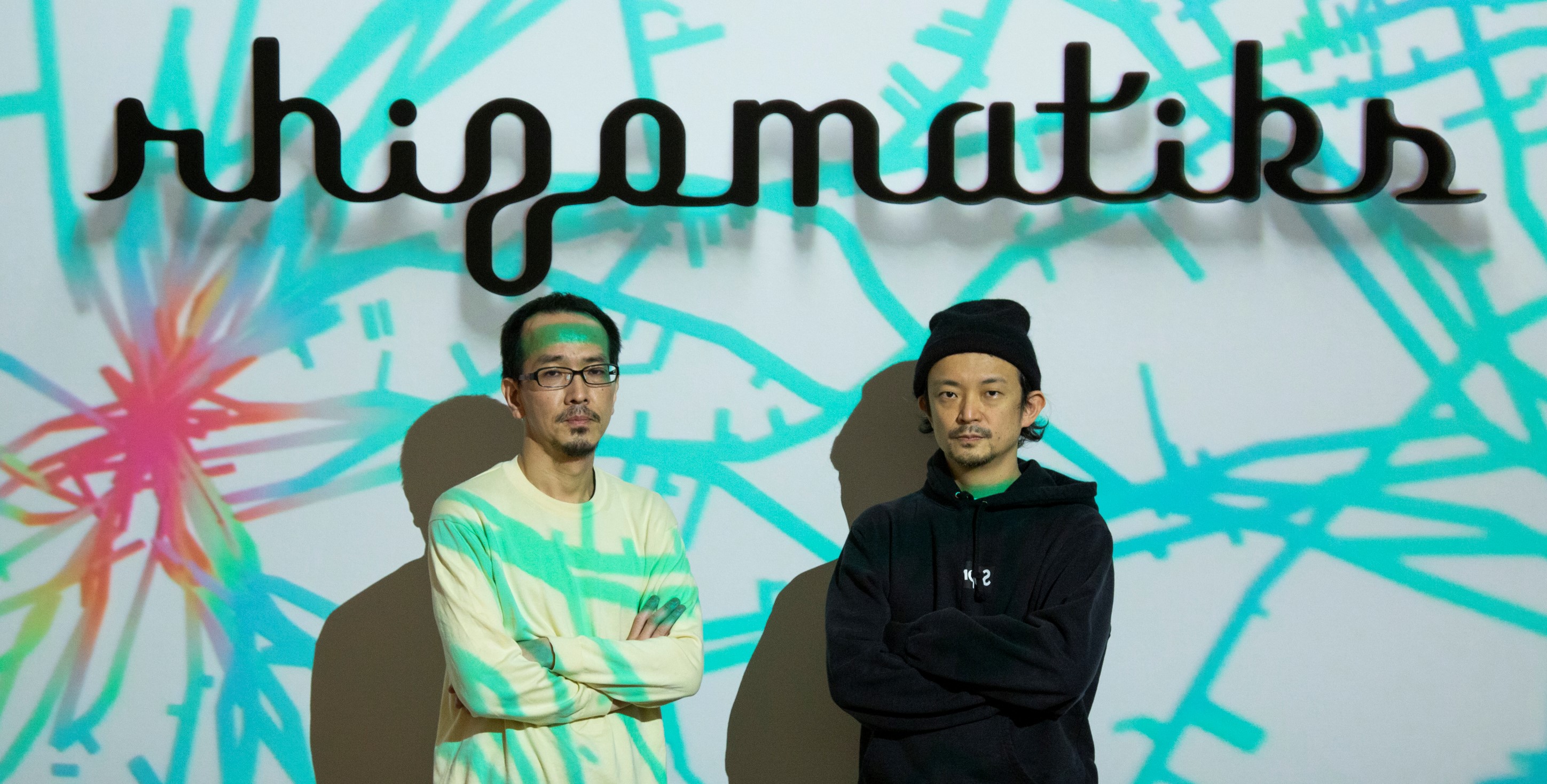 The First Large-scale Solo Exhibition of Works by Rhizomatiks, the Pioneer of Innovative Artistic Expression

Rhizomatiks is known for its exploration of human-technology relationships, activities in areas beyond media art, and collaborations with artists such as Perfume, Mansai Nomura, as well as researchers. In the spring of 2021, which marks the 15th anniversary of the team’s founding, the Museum of Contemporary Art Tokyo is hosting rhizomatiks_multiplex (March 20–June 22, 2021), the first large-scale, solo museum exhibition. We invited the organizer of the exhibition, Yuko Hasegawa, as an interviewer to speak with Daito Manabe and Motoi Ishibashi, the co-directors of Rhizomatiks’ research and development division, Rhizomatiks Research. 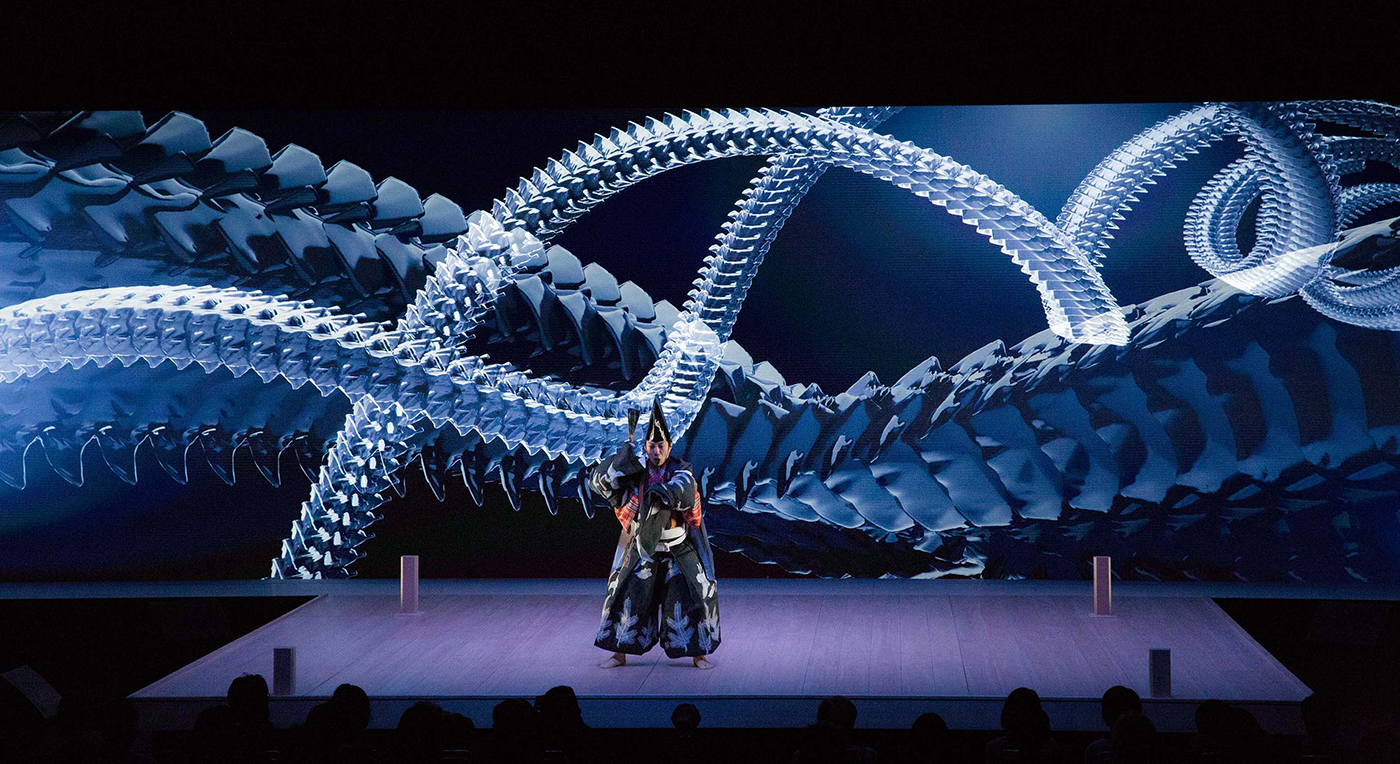 Hasegawa: I’d like to start our conversation by asking what kind of collective Rhizomatiks is, so that the readers can understand who you are. It would be great if you could also talk about your famous collaborations like technical support for Perfume’s live performances, your creative processes, and about this exhibition.

Manabe: I founded Rhizomatiks with my classmates from the Tokyo University of Science (TUS) and IAMAS (International Academy of Media Arts and Sciences), where I had studied after TUS. Initially, we were making a profit from producing websites and ads and using that funds to create our own experimental projects using technology. Since 2010, opportunities to produce the latter type of projects have increased thanks to requests from the manufacturing, entertainment, and advertising industries, and the scope of our activities has further expanded.

Ishibashi: I joined the team later and have been working with Manabe and others on research and development and experimental projects. As a group, Rhizomatiks has about 50 members with diverse backgrounds such as computer science, system control, architecture, product design, and graphic design. We are unique in our ability to create innovative means of expression by combining everything from software, hardware, graphics, machines, etc. 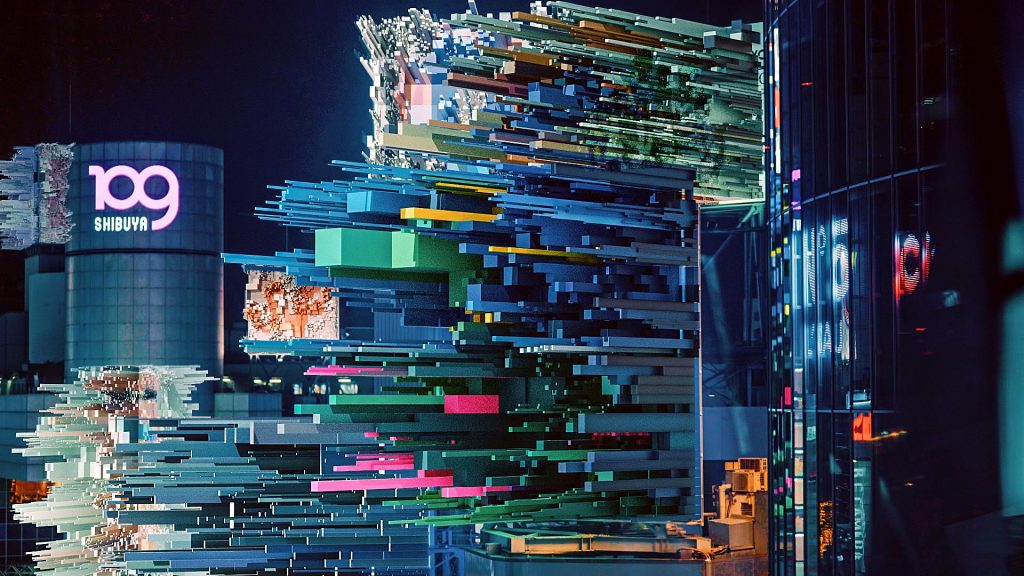 Squarepusher, Terminal Slam, 2020 [Image for reference]
The music video, directed by Daito Manabe, is based on the concept of eliminating advertisements from the streets using imaginary MR (Mixed Reality) glasses.
In 2020, the work received Honorary Mentions at the Prix Ars Electronica.

Hasegawa: In addition to the collaborations within the team, you also work with artists and professionals from diverse fields, including traditional performing arts and scientific research.

Manabe: For collaborative projects that we’ve done in a relatively short period of time, I should mention the music videos for Björk and Squarepusher. They were like producing a piece in a jam session with people who shared a similar inclination toward an experiment, using each other’s skill set. On the other hand, there are collaborations that involve long-term research and development, like our work with Perfume, ELEVENPLAY, and Kyogen actor, Mansai Nomura. In the process of reiterating a program or system and improving its quality, we build a shared language that allows us to try something more challenging. For example, border, which we produced with ELEVENPLAY in 2015 and presented the new version in 2021, was a work that made me truly recognize the boundaries between digital × analog and virtual × real, the realms that I had been tackling in my work. 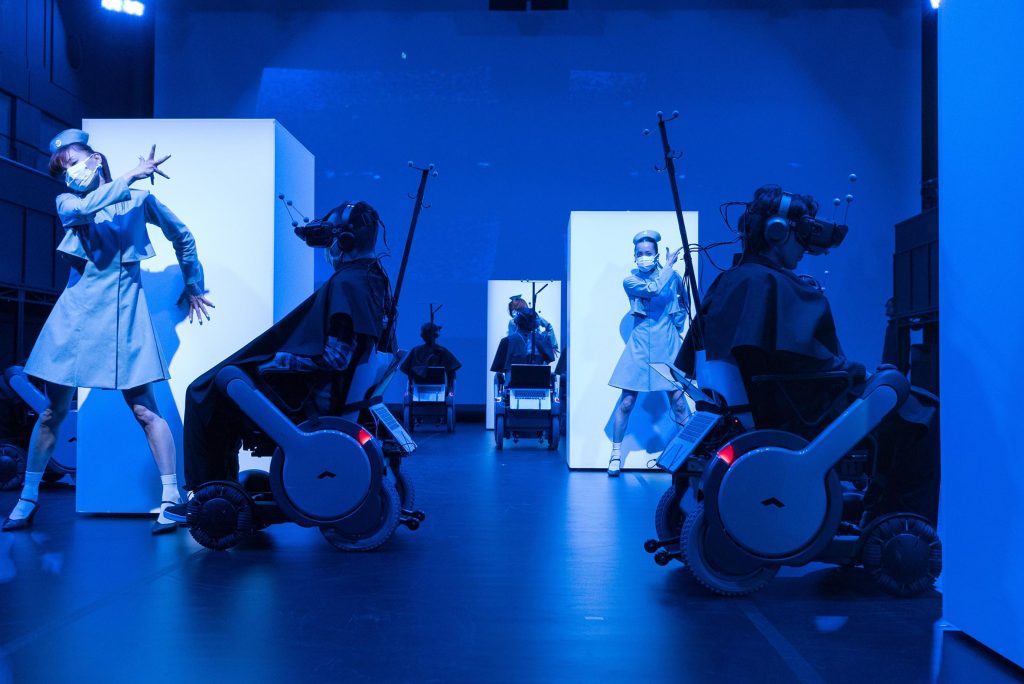 Rhizomatiks Research × ELEVENPLAY, border, 2015 / Photo by Muryo Homma [Image for reference]
Interactive dance project that employs MR (Mixed Reality) and mobility technologies to allow for a seamless shift between the real dancers and virtual dancers on data, making the viewers unable to recognize the boundary between the real and virtual.

Ishibashi: I, too, find working with dancers exciting. We can create objects or movements that anyone would find interesting using technology, but when we present the work in an actual exhibition or on stage, we need a different perspective. Collaborating with dancers or choreographers who can express themselves with their bodies gives me fascinating new ideas about how to use technology in a way that leaves a vivid impression. I always hope that such an experience could spark further ideas.

Thinking about the near future through “visualization and implementation”

Hasegawa: Rhizomatiks’ expressions are visually sophisticated and aesthetically superb. Could you talk about your production process?

Manabe: Most of our projects are data-driven, meaning we start with data. When we collaborate with dancers, we begin by collecting the data of their movements, and then figure out how to translate the data into visuals and sounds. In 2013, we presented traders at BUNNY SMASH: design to touch the world at the Museum of Contemporary Art Tokyo. The installation visualized the real-time market transaction data of the Tokyo Stock Exchange together with the transaction data of automatic trading by software. Back then, the word “AI” was just beginning to enter our society, but automatic trading had already been introduced, so we decided to visualize the situation. We wanted to not only make social satire and enlighten people but also create and implement a system that could function in reality. For the exhibition, because of the museum’s policy, we were only able to display virtual trading and not real automatic trading. That being said, our style is to experiment with reality before social definitions and rules are established and show what is likely to happen a little ahead of time, in the next five or ten years.

Hasegawa: I believe Rhizomatiks’ work has a critical nature that encourages us to think by visualizing what is currently happening and making predictions based on it. In modern society, invisible events and systems are in operation everywhere. Visualizing such activities in a unique way is crucial in understanding our environment with a greater sense of reality.

Hasegawa: This is your first large-scale exhibition at a museum. What kind of event would you like it to be?

Manabe: Firstly, for us, it will be a good opportunity to look back on and visualize, after more than a decade of working as a team, the individual projects and how they were linked to each other and brought us to where we are today. We also hope to offer the viewers a valuable experience during the pandemic where they will be able to visit real spaces to see the work. We are planning to make the exhibition viewable online in real-time, too. We want to create a hybrid viewing experience that offers an opportunity for the viewers to experience the kind of vision we are aiming for. 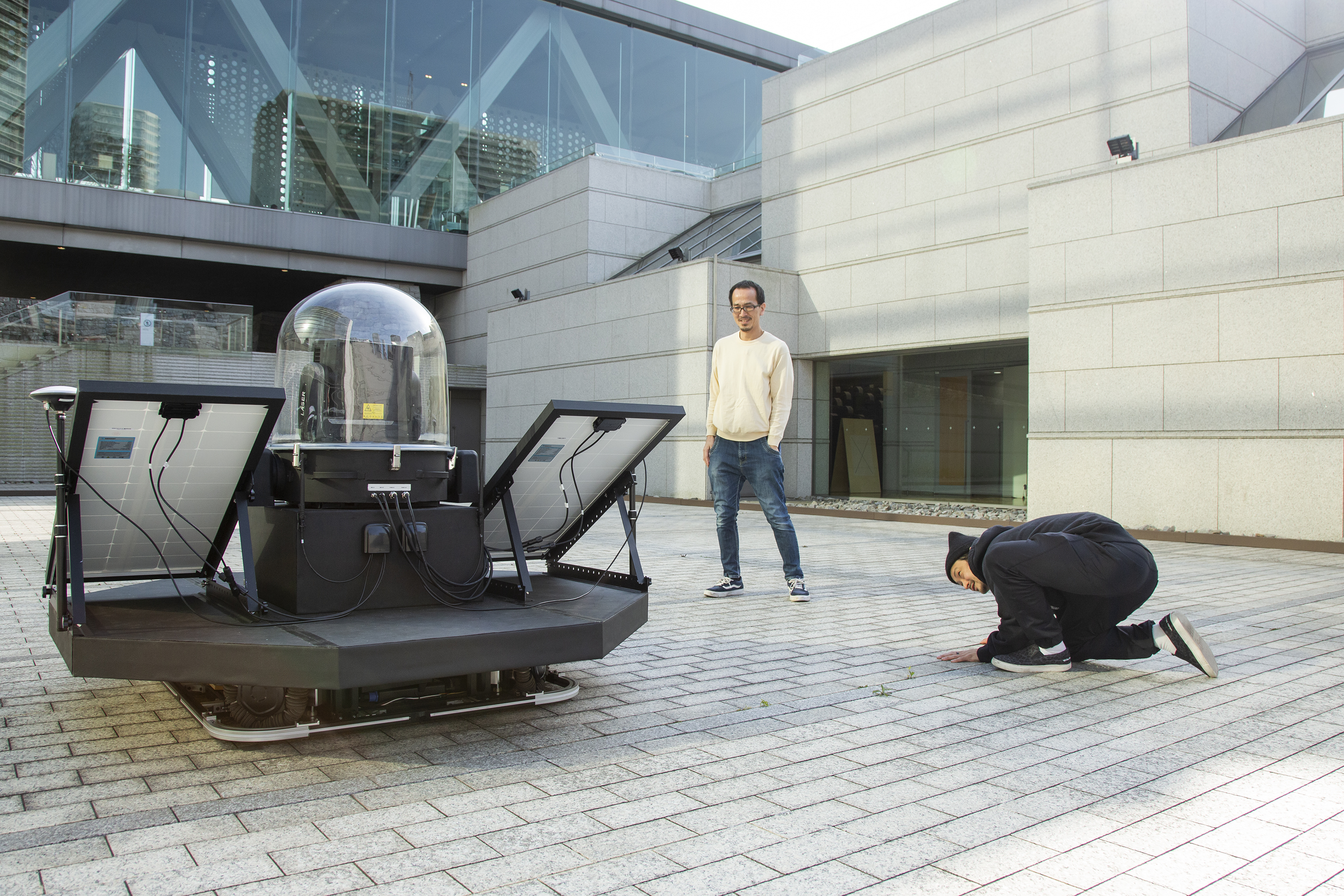 【New Work】RTK Laser Robotiks Experiment, 2021 /Photo by Hiroshi Shiohara
In the courtyard of the Museum of Contemporary Art Tokyo, a robot that uses lasers to indicate the location of satellites in the sky runs automatically.

Ishibashi: Specifically, the exhibition will consist of two new works, an introduction to ongoing projects, an updated version of particles which was originally released in 2011, and an archive of previous works. As for the archive, if what we usually present to the public could be considered the final form, we hope this exhibition to be a place where the viewers can see the excitement of the process, including the trial and error that leads to the final form. You may think that our work is focused on live performances, but for us, the process leading up to the actual performance is what we do “live,” so we are looking forward to sharing this part of our work with everyone. 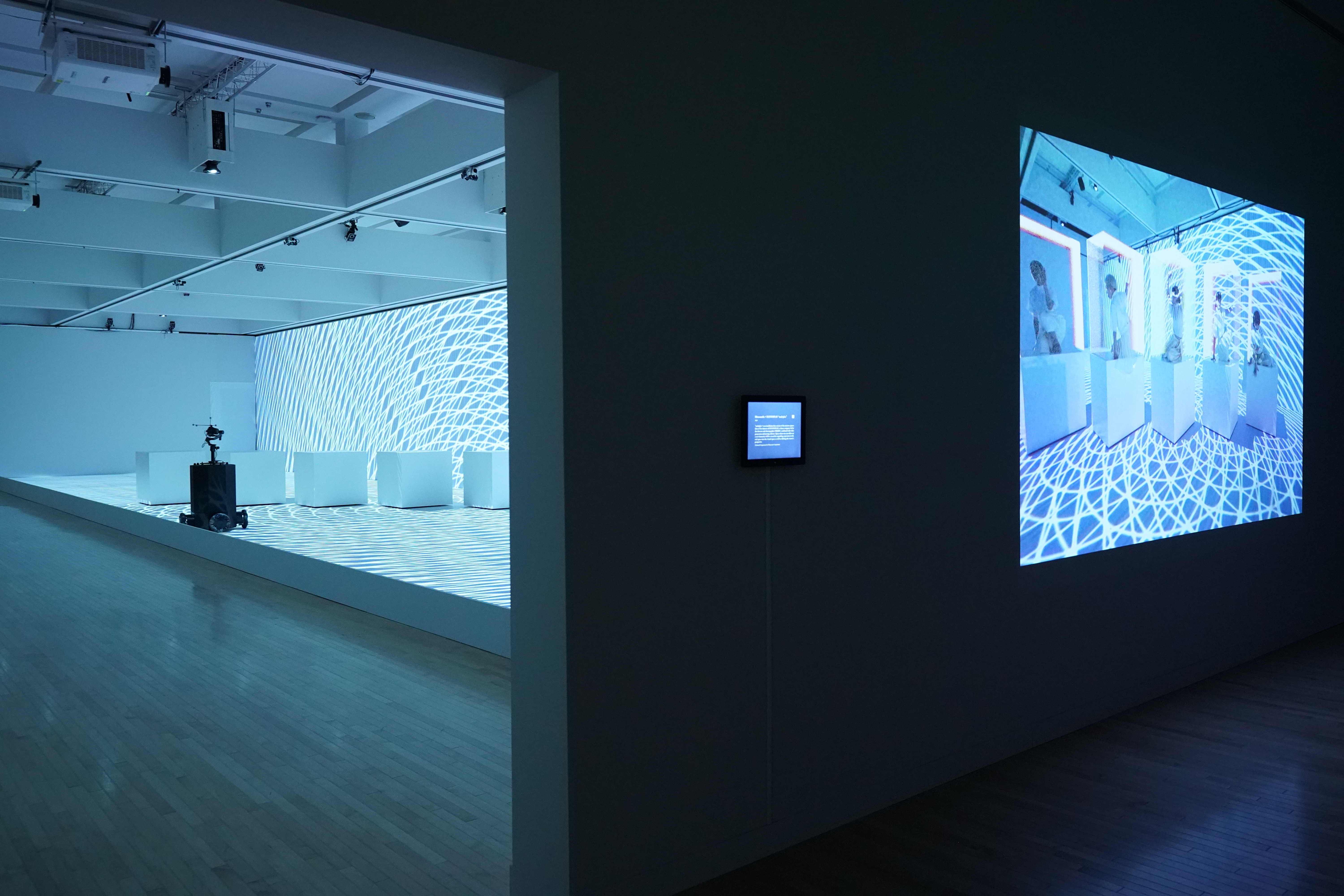 【New Work】Rhizomatiks × ELEVENPLAY multiplex, 2021 /Photo by Muryo Homma
An installation composed of motion data of the dancers of ELEVENPLAY, a dance company led by MIKIKO, with video projections and moving robotics.

Manabe: I’d also like to come up with a scheme where, for example, upon seeing the work online, the viewers are unable to distinguish what is real and what is virtual, so they have to physically visit the museum to be sure. Unfortunately, we cannot have dancers on-site for an art exhibition that runs for months, but we are considering using mobile objects. Another idea we have is to incorporate the visitors’ behavior as data into the exhibition. Art exhibition venues are, in fact, an interesting place to collect data.。

Ishibashi: I agree. The opening of the exhibition is not the end but the beginning of our three-month-long adventure. 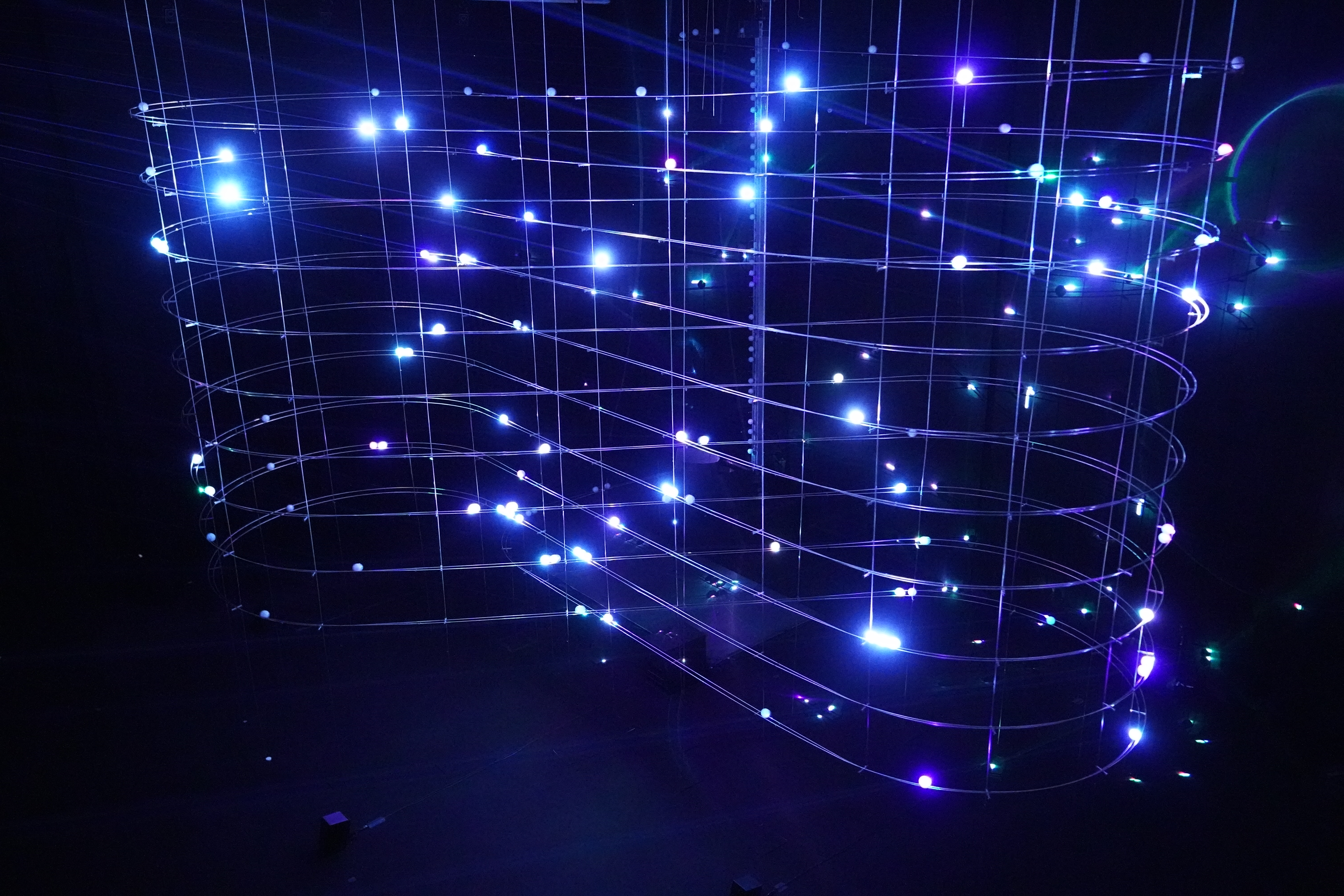 【New Work】 particles 2021 , 2021 /Photo by Muryo Homma
particles (2011), which received numerous awards in Japan and overseas, was updated as a new production. A laser beam that precisely tracks the position of a ball rolling on a rail creates a three-dimensional visual representation of an afterimage.

To engage with future technologies

Hasegawa: The internet dramatically changed our way of thinking and communicating, but it also has various harmful effects. We may think we are choosing what we see, but the information might be controlled by someone else, or our personal information may be leaked without our knowledge. What are your thoughts on this matter?

Manabe: The internet ecosystem is completely wrecked, in my opinion. The reason why fake news and conspiracy theories are so prevalent is because they have already become a business, supported by targeted advertising and personal data collection. Just as I was thinking that things were going astray, however, a new system for digital art called CryptoArt that uses blockchain technology has emerged recently. I’ve been researching it as a potential key to the solution. It is unique in that it uses a Non-Fungible Token (NFT), a technology that can prove the “uniqueness” of the data. New discussions on the subject are emerging every week. The system is so new that we don’t yet understand its legitimacy, but that is precisely why it interests me. 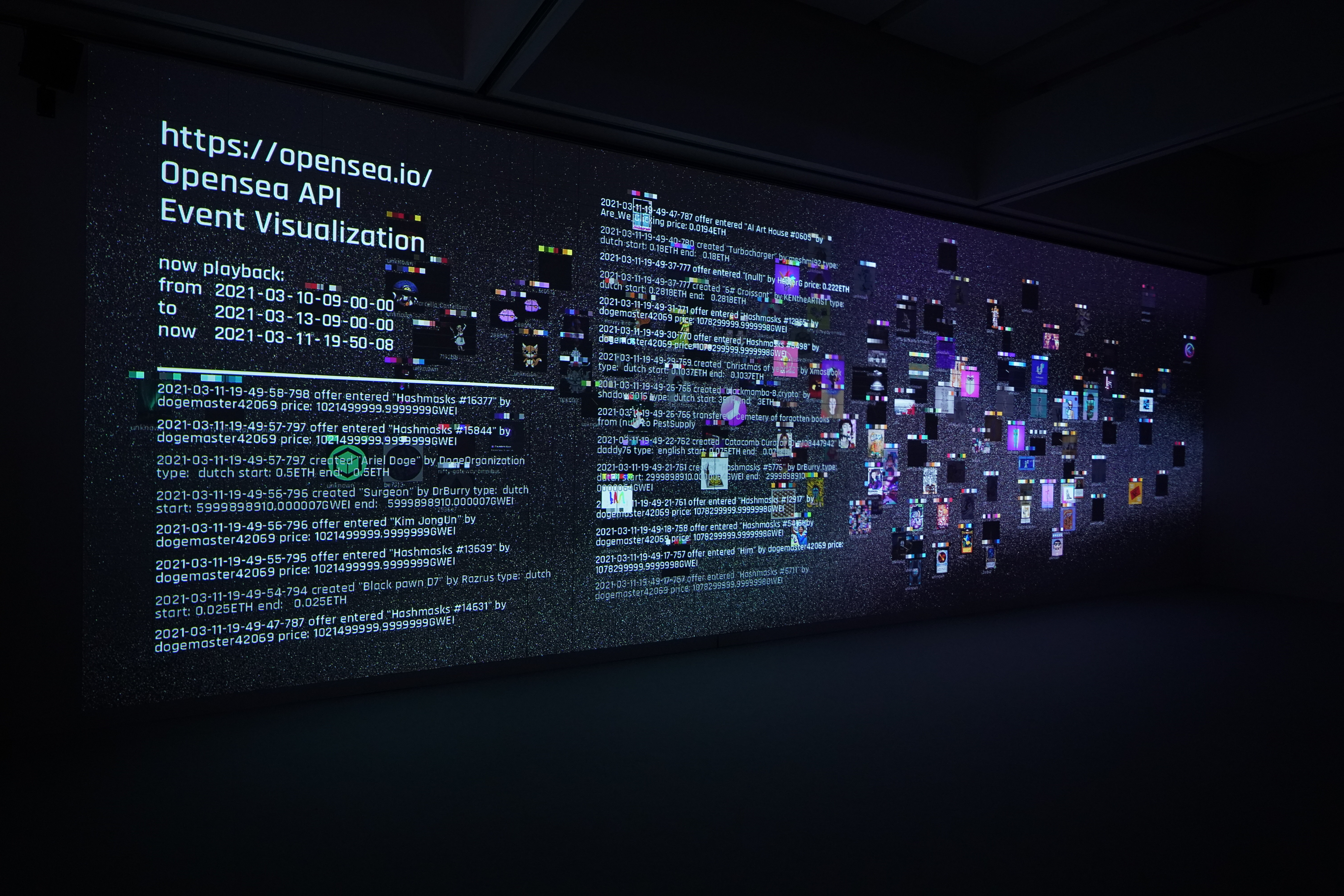 Hasegawa: Earlier, you mentioned “data-driven.” What is your take on the potential of data?

Manabe: I’m attracted to digital data because it can be freely transformed into sound, images, or anything with the algorithm. Previously, audiovisual expressions came from an interrelated activity such as creating a music video for a song or adding sound to a movie. Digital-data-driven expression with its immediacy, on the other hand, allows us to create sound, images, and sometimes even choreography in parallel, without hierarchy. Seeing the potential in this was what led me to my current activities. What about you, Ishibashi-san?

Ishibashi: I’d like to bring back the discussion about collaboration. I’ve had experiences where data has proven useful in collaborations. Explaining with numbers, instead of words, eliminates misunderstandings, and makes cross-discipline conversations between software and hardware experts, for example, go smoothly. I think there is certain merit to this approach in that it eliminates ambiguity and reduces unnecessary problems.

Hasegawa: In terms of how AI sees the world, it perceives all sounds and images as data. Audio data can perhaps be converted into something visual, then further into a smell. If such translation is possible, we may be entering an era where genes as information, which is a physical entity, and data itself, which has no physicality, can freely go back and forth. Furthermore, there are territories that humans have spent a great deal of effort and time building “trust” with each other, but they can become “lighter,” in a sense, through digitization. From there, we may be able to create a more extensive network, which could lead to completely different fields like art and business joining forces, for example. Rather than naïvely thinking that technology will eliminate humanity, we should optimize it intellectually by considering how to make full use of it. Rhizomatiks stands on the trajectory of this journey. 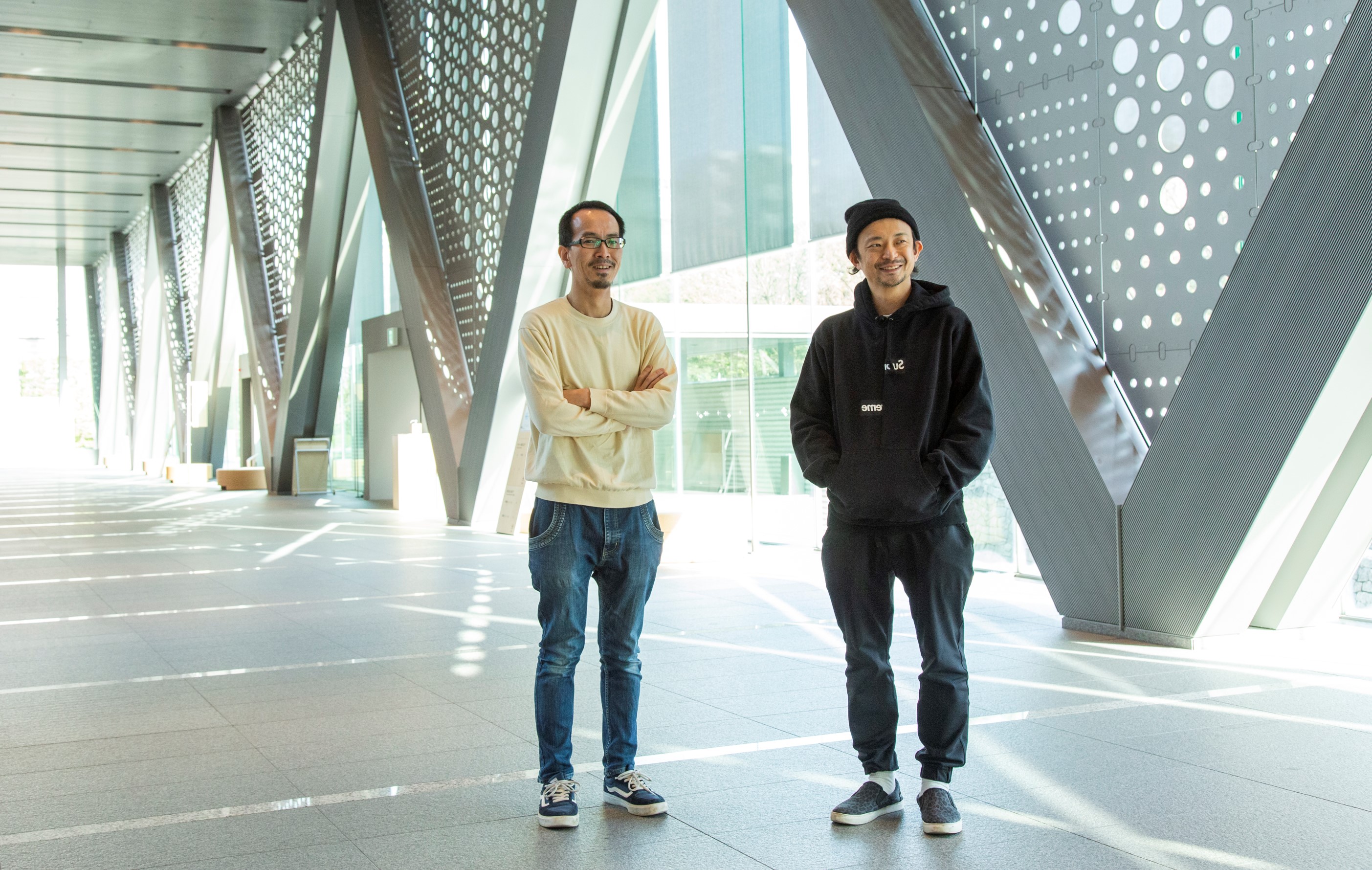